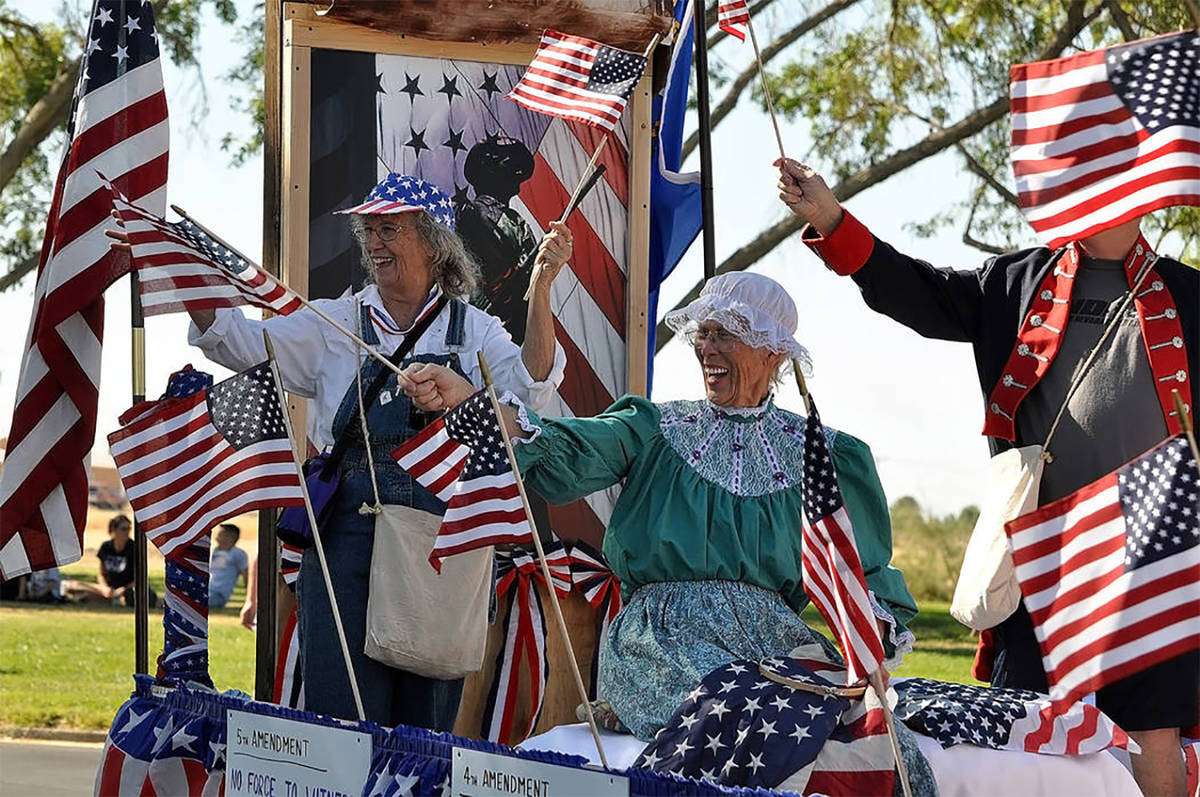 Horace Langford Jr./Pahrump Valley Times This file photo shows one of the entries in the 2019 Fourth of July Parade. This year's event is set for Saturday, July 3 at the Calvada Eye and will include a parade as well as free festivities, such as a barbecue, games and contests. 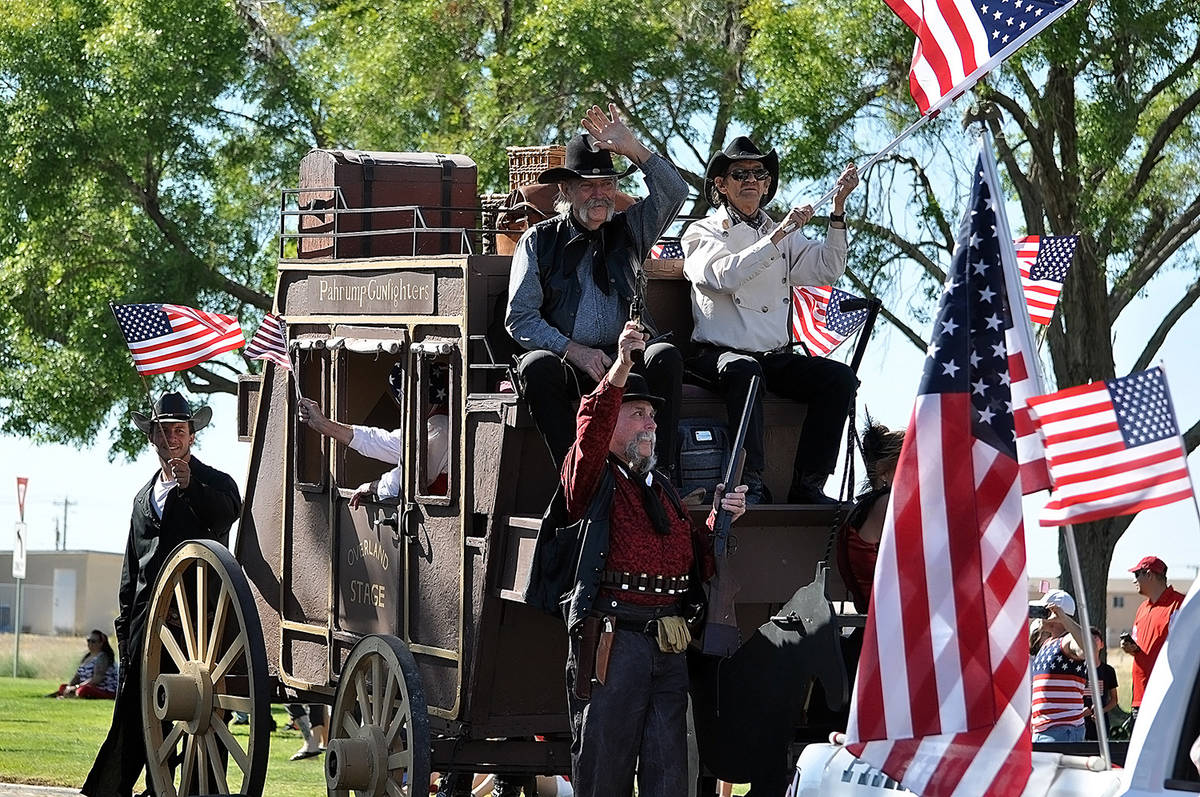 Horace Langford Jr./Pahrump Valley Times Members of the Pahrump Gunfighters have been a fixture at the July 4th parade for many years and they are just one of the many groups that will be getting in on the fun during this year's parade.

The Pahrump Holiday Task Force is well known for its annual community events during the Thanksgiving, Christmas and Easter holidays and now, this nonprofit group is expanding its efforts into the summer months as well by assuming the task of organizing and hosting the local Fourth of July Parade.

But the group is going further than just putting on the procession of floats and entries that will wind their way down Calvada Boulevard.

Members have plans in the works for a full-scale event that is scheduled to take place following the parade and they are encouraging the community to mark their calendars for Saturday, July 3, when the inaugural Fourth of July Family Celebration will take over the Calvada Eye for an afternoon of free family-oriented fun and activities.

Pahrump Holiday Task Force Chair Linda Wright said the entire group is very excited to undertake this new event and they are all anticipating a successful occasion filled with patriotic delights.

The Fourth of July Parade was originally the brainchild of two former Nye County commissioners, Dan Schinhofen and Butch Borasky, who teamed up with the Veterans of Foreign Wars Post #10054 to hold the event each year.

However, the time has come for a new organization to step up and take over, and with the Pahrump Holiday Task Force already familiar with putting on large events for the community, this group was obviously the perfect fit.

In addition, Wright herself has been a key organizer for the parade for several years and with some assistance from Schinhofen, who is lending his expertise while the Pahrump Holiday Task Force gets into the groove of hosting the event, the task force should meet with little to no trouble in the endeavor to bring the festivities to the valley.

“The parade is set to kick off at 10 a.m. on July 3 and it will be heading around the Calvada Eye, just like in years past. We hope everybody will come out and join us to participate in and watch the parade!” Wright enthused. “After the parade is over, we will be giving out awards for the best entries, too, same as has always been done.

“Then we’ll have the celebration for the families, in the Eye, with a free barbecue, all kinds of games for families and kids, a bouncy house, face painting and we’re even planning a watermelon eating contest,” Wright continued. “It’s really too many things to name in a list, but it’s going to be a whole lot of fun. And most importantly, this is all free to the community! The food, the games, it’s all free for our families. We just want people to come out and have a really great time.”

One of the most important elements of the day will be the floats and entries that grace the parade procession, and Wright said she is looking for more people to participate. Thus far, she said she has already been contacted by several area businesses and organizations that will be taking part, such as the Nevada Silver Tappers, the Shriners with their iconic tiny cars, the Pahrump Gunfighters, the VFW Riders, a variety of vehicles such as classic cars and an array of jeeps and much more. It’s a great opportunity for area businesses and entities to get out in the public eye to raise awareness of their products and services while also celebrating America’s birthday and entertaining the community at the same time, not to mention that the entry fees paid will go directly into the Pahrump Holiday Task Force’s coffers to help pay for its other free community events throughout the year.

Wright said the group is always grateful for the generosity that members of the community show and they will be taking any and all the donations they can get. “They can be monetary or food donations, whatever people can contribute. And all monetary donations are tax deductible, so we can get the 501(c)3 information to those who make a cash donation,” Wright said.

All checks will need to be made out to Heritage Bible Church, which is acting as the parent organization for the task force, with Pahrump Holiday Task Force in the memo line. All funds raised through the Independence Day celebrations, including parade entry fees and donations, will go directly toward helping the task force host its other events for the Thanksgiving, Christmas and Easter holidays.

Parade registration forms are available now, with entries to cost $25 each. These forms can be obtained by contacting the task force via email at pahrumpholidaytaskforce@gmail.com or calling Wright at 775-419-7857.

The inaugural Fourth of July Family Celebration is set for Saturday, July 3 at the Calvada Eye. The parade will begin at 10 a.m. and the activities will follow.