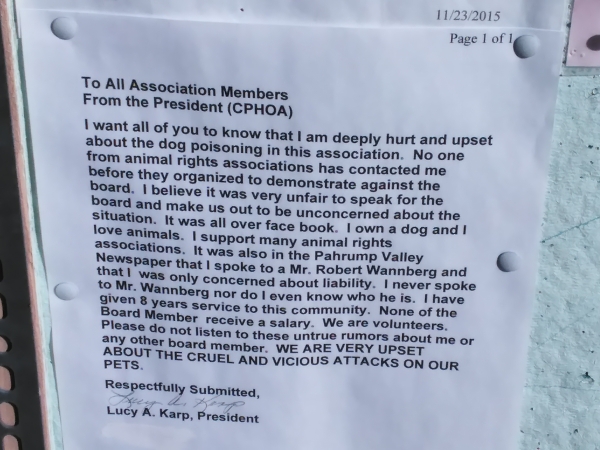 When Lucy Karp, president of the Comstock Park Homeowners Association, learned about a demonstration supporting animal rights last month, she was supportive.

However, it turned out that many outside the community’s entrance held signs upset about a perceived lack of empathy and action by the association following the poisoning of some dogs in the area.

“I did not realize that they were demonstrating against the homeowner’s association board because I didn’t know anything about it,” Karp said.

Karp said she first learned about the poisonings after resident Judy Miers complained about her dog being poisoned to the office manager at the site.

Her dog was one of the first that died.

“She told the office manager about the poisoning of her dogs and she also told her that she was going to post signs warning pet owners about the poisonings on our bulletin boards,” she said. “Misty said that it was okay to post the signs.”

Karp said she too, posted signs on the community billboard informing residents about the events.

She also said one animal rights supporter made a suggestion that was beyond the ability of the association to fulfill.

“A man from the Paws and Claws organization ask me to send certified letters to every homeowner here,” she said. “I told him that we cannot afford that. We are very poor association in terms of dollars generated here.”

Though the Nye County Sheriff’s Office is investigating the crime, Karp said there is only so much the homeowners association can do by themselves, according to local ordinances.

“We are only responsible for these buildings and what we call the greenbelt area with its park like setting, swimming pool and Clubhouse,” she said. “Other than that, the homeowners own their own property so it’s their responsibility to take care of their properties. We can’t go on them because that would be trespassing and the roads here are county roads which is very unusual in an association. Usually the Association owns all of the property but we don’t own the roads so we can’t stop anybody from coming in here.”

Additionally, Karp said she was concerned about rumors in the community regarding a teenage boy at Comstock allegedly committing the crimes.

She said she chastised one resident after overhearing the person uttering the name of an individual thought to be responsible for the poisonings.

“One of the women who was demonstrating named a certain individual and I told her don’t, under any circumstances, name a name whether it be an adult or juvenile,” she said. “You can’t do that unless you absolutely positively observed this person doing it. You cannot just go around naming people’s names.”

Board member Judy Howarth said she spoke to a demonstrator who was surprised Comstock Park is not a gated community.

“This is open for anybody and everybody who wants to come in from either entrance,” she said. “He was also shocked that we are on county roads and we cannot stop anybody from coming through because we don’t have that authority.”

The sheriff’s office has yet to release any additional information on their investigation, only to say in a press release, they believe the poisonings are all related.

Karp, meanwhile said there have since been other instances of dogs being poisoned at Comstock Park, but they have since recovered.

“I believe there have been five dogs who died from being poisoned. The rest are fine because they were taken care of,” she said. “As far as any advice, I would say watch your animals and always be with him if possible. You also want to check your yard first thing in the morning if you’re going to leave your dog out.”

Anyone with information about the poisonings is urged to contact detectives at 775-751-7000, or confidentially via email at ncso_detectives@co.nye.nv.us.