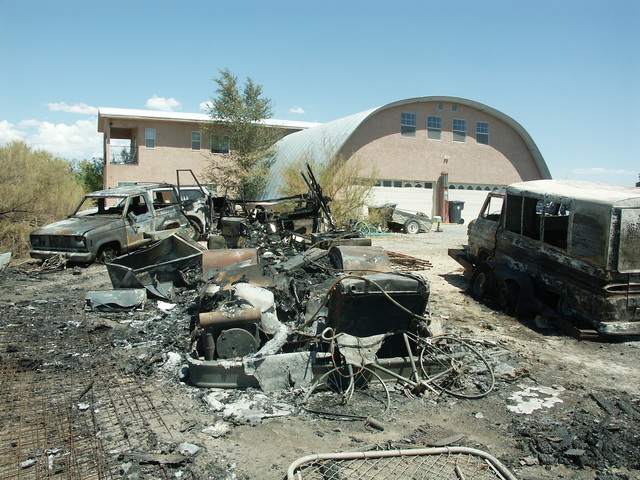 Moments after the dispatch of a reported brush fire went out last Tuesday, Pahrump Valley Fire and Rescue Services (PVFRS) Chief Scott Lewis peered out of his office window to see greyish smoke billowing off in the distance.

As fire crews were en route, Lewis said the hue of smoke became darker, which is never a good sign.

“From our building, we could see smoke conditions and while en route there were numerous calls the brush fire was extending to structures and vehicles. You could see the changes in color, so it was coinciding with the reports we were receiving on the radio,” he said.

Along with PVFRS, additional area fire crews responded to the scene as part of the department’s Mutual Aid Agreement (MAA).

Lewis noted that at least three members of the MAA agency sustained minor injuries while fighting the blaze.

“They were treated and released at the scene. There was also one civilian who refused medical treatment,” he said.

State Fire Marshal Michael Kolpak said on Thursday, though the initial investigation is inconclusive, according to witnesses, illegal fireworks may have been the source of the fire.

“We have witness statements from a neighbor that indicate they heard bottle rockets going off prior to the fire. We started following up with neighbors, witnesses and family members. My investigation of the origin of the fire showed that it did start in a heavily wooded area with no other possibilities for ignition sources like electrical or lightning,” he said.

At least three adults and four children were residing on the property at the time.

Kolpak said the blaze consumed several vehicles and a dwelling.

“There was a single-wide trailer that was completely destroyed as well as, I believe, five vehicles. There were two RVs, five vehicles and a number of out-buildings. About two to three acres of wild land were burned,” he said.

Last Wednesday, a man who lives adjacent to the destroyed trailer was quite thankful that his 4,000-square-foot, two-story home was saved.

Several vehicles he owns, however, were destroyed.

The man, who identified himself as Delbert, has been a local resident for 20 years.

With the noise of a generator blaring outside his front door, to provide electricity, the 78-year-old enumerated the losses he incurred early Tuesday afternoon.

Near his doorstep, was a spent aerial-type firework.

“I had a ’73 motor home and a Ford Bronco that was burned to the ground. I also had a ’63 Chevrolet Corvair pickup with a camper shell that was destroyed. My towing trailer was burned up,” he said.

In spite of his losses, the man appeared to take the whole episode in stride.

“I know it’s a mess, but things happen. How it actually started, I don’t know because it’s up to the fire marshal. I figure at age 78, why get excited. It ain’t going to do any good to get upset and raise your blood pressure,” he said.

Lewis, meanwhile, said local law enforcement officials will be on the lookout for those using illegal fireworks.

“I know the sheriff’s office will be vigilant on the misuse of fireworks this season. The sheriff is well aware of our situation with the temperatures and dry conditions,” he said.

Just recently Nye County commissioners voted to allow what’s known as “safe and sane” fireworks for use within the community.

Lewis noted that fireworks were blamed on two recent fires within the community.

“We have had two significant fires within the last six weeks. Both were directly related to the use of fireworks. They were not at the hands of adults, but juveniles,” he said.