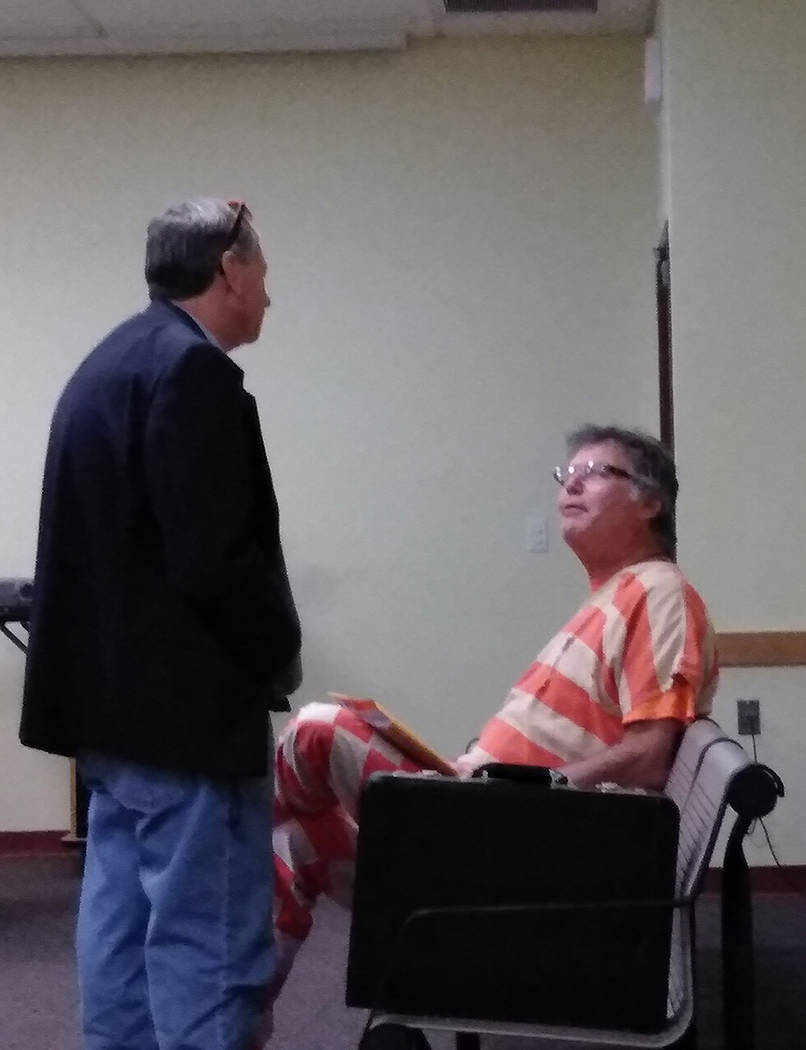 Selwyn Harris/Pahrump Valley Times Pahrump Justice of the Peace candidate Richard Hamilton, in custody and seated, speaks to defense attorney David Neely III prior to his court hearing on Monday Feb. 26. Hamilton is charged with contempt of court after allegedly failing to allow a former tenant at his residence to retrieve her belongings after moving out of the home. Hamilton's next court date is scheduled for March 21 at 9 a.m.

The man looking to become a Pahrump justice of the peace appeared in court on a contempt charge.

Richard Francis Hamilton, 60, who was initially taken into custody last month appeared before Justice of the Peace Kent Jasperson on Feb. 26.

The arrest order, related to a civil property hearing, was issued by Jasperson.

The case stems from Hamilton’s offer to allow tenant Diane Lake to stay at his residence.

Over a period of time, Hamilton had a change of heart and wanted Lake out of the home.

Hamilton, according to the case summary, then allegedly refused to allow Lake to retrieve all of her belongings after she moved out of the residence last year.

The summary also stated that Hamilton, in turn, filed a temporary protection order against Lake in an effort to circumvent Jasperson’s court order allowing Lake to retrieve all of her property from the residence.

Incidentally, local law enforcement said Lake was one of seven additional individuals arrested in connection to a theft and fraud scheme, several years ago.

The number of victims grew to approximately 200, where many of them were not aware that their mail and identities had been stolen, according to the Nye County Sheriff’s Office.

Defense Attorney David Neely III, representing Hamilton, motioned for the charge to be dismissed during his opening statement.

Neely cited a Nevada revised statute, stating that an affidavit must be presented to the court if the contempt charge was not committed in the view and presence of the court.

An affidavit is a written statement of evidence confirmed by an oath.

“Mr. Hamilton rented a space to a Diane Lake and then Mr. Hamilton evicted Ms. Lake from the property,” the judge explained. “When Ms. Lake left the property, she did not take all of her personal property with her. She has since attempted to reclaim that property. When there was a civil hearing with regard to the eviction, Mr. Hamilton admitted to the court that he violated the statute where it says that he is required to give Ms. Lake a 15-day written notice, that if she does not retrieve all of her property, he is then going to dispose of it. He said in court on the record, that he never followed the statute and advised her that her property was going to be disposed of.”

Additionally, Jasperson suggested that Hamilton essentially tried to “game the system,” by applying for and receiving a protective order of stalking against Lake.

“Thinking that he was going to outwit the court, Mr. Hamilton went to the window out front, and applied for a stalking and harassment order in order to keep Ms. Lake off of his property, to prevent her from getting her stuff that he was ordered to return to her. The stalking and harassment order, granted by the court, had an exception, which would allow her to go onto the property to retrieve her belongings. However, after several attempts as represented by Ms. Lake, Mr. Hamilton was never available when she went to retrieve her belongings, even in the presence of local law enforcement.”

The law enforcement Jasperson was referring to was none other than the court bailiff, Gerald “Bear” Smith, Jasperson said.

“I specifically told your client that he did not follow the statute and he was required to return Ms. Lake’s belongings to her,” the judge said. “In fact, I set out specific dates following Presidents Day weekend that my bailiff, Mr. Smith, would accompany Ms. Lake to Mr. Hamilton’s house, on February 16th 17th, 18th, and 19th, where he was to be there to return her property.

“When they arrived at the house, Mr. Hamilton was nowhere to be found. Several phone calls were made and when my bailiff finally made contact with Mr. Hamilton, Mr. Hamilton told my bailiff that he no longer lived there and he moved to Boulder City. He said he rented his house out and he did not know when he was going to be back.”

Additionally, Jasperson told the court that the stalking order should not have been issued in the first place.

“As Hamilton stated in a subsequent hearing, he admitted that he was not afraid of Ms. Lake, but he was afraid of a subject by the last name of Ruiz, who had battered him on a prior occasion when he was with Ms. Lake. The protection order that was issued was issued erroneously to begin with and should not have been issued against Ms. Lake to start with, if he was actually afraid of Mr. Ruiz, and not Ms. Lake.”

As a result, Jasperson said Hamilton has been advised at least three different times by the court that he was in violation of the statute and he needed to return Lake’s property.

“On every one of those occasions, he has turned a blind eye to, and completely ignored the order of this court,” the judge said. “That is the reason for the contempt charge.”

After roughly 10 seconds of silence, Neely said he would stand by his argument to dismiss the matter.

Jasperson meanwhile, stood by his own order, while noting that his bailiff was present and ready to testify on the details and events related to the retrieval of Lake’s property.

“I will not dismiss the charge but will continue this hearing and have Mr. Smith prepare an affidavit,” he said. “I will deny your request at this time for a dismissal and continue this matter.”

During an interview last month, Hamilton proclaimed and maintained his innocence.

“According to them, I am in violation of a civil court order issued by Judge Jasperson,” he said as he remained confined in the Nye County Detention Center clad in an orange-and white-striped inmate jumpsuit.

“In my opinion, that civil statute does not apply to me, so essentially, I am being held against my will for something that I did not do. According to the court, I am charged with not obeying a court order, which was to let a woman into my residence that I evicted her out of. They put out a warrant for my arrest three weeks ago.”

Hamilton also said he feels that he has more than met his obligations in relation to Lake’s property.

“I’ve already let her come in there with a deputy to retrieve her belongings,” he said. “She came back again and trespassed on my property when I had a restraining order against her. The judge didn’t agree with that, so he issued a court order to let her back in, but I have the house rented out. I don’t live there, so I just can’t let somebody in a house that I have already rented out to someone else, so I was in violation of a court order because I did not let her in again.”

In Nevada, the penalties for civil contempt of court include up to $500 in fines and/or 25 days in jail.

Both sides are expected to return to court at 9 a.m. March 21.