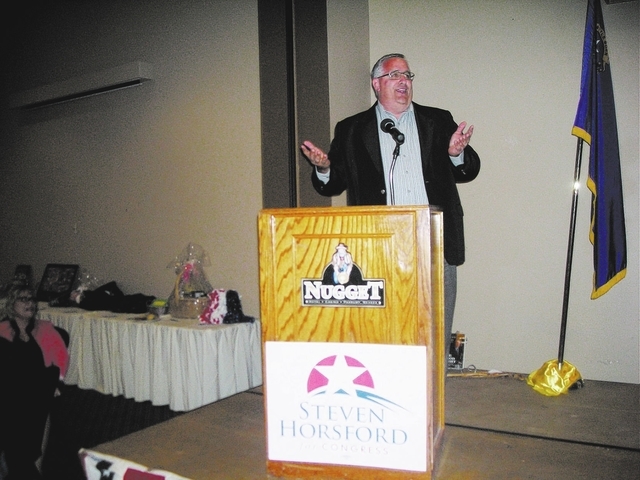 Hollywood couldn’t dream this stuff up.

He was talking about the conspiracies, the scandals, and the general insanity that sometimes encroach on his daily task of maintaining law and order in the new old west.

He asked Democrats during their annual dinner to allow him to continue to battle this insanity, a veiled reference to his re-election campaign.

“I’m certainly in a unique position, given the fact I’m the only elected Democrat in (Nye) county government,” Kunzi said, “when you think I signed up for this insanity when I was working for what was truly a great Attorney General, Catherine Cortez Masto.”

Kunzi said Nye County government is at a crossroads. Without mentioning names, he referred to Concerned Citizens for a Safe Community and like-minded local activists, who have CCSC President Donna Cox and sympathizer Frank Carbone on the five-member county commission. One more makes a majority. He also made references to County Assessor Shirley Matson, recently accused of intercepting county mail to federal officials. She is under investigation by the FBI.

“We have public officials who think they have the right to use the county mail system as a conduit for their clandestine spying. We have county commissioners who think they can hold secret meetings in government offices after hours, accessing any records they want, then proclaim it’s not the public’s right to know what they’re doing. I’ve been demanded to use our police powers to get financial records of nonprofits that some people didn’t like without a search warrant and then these people actually believe government has a right to go in and do these things.”

In speaking about the county assessor’s derogatory remarks in e-mails about Hispanics, Kunzi said, “We all remember what public officials said about Hispanic girls and their desire to have anchor babies.”

“Then I’ve been involved with attempts to arrest the town board for repealing an unlawful ordinance a previous board actually said could not be repealed, clearly an unlawful order” by itself, he said, referring to the attempt to ban any town board vote on incorporation.

“We’ve had an attempt to declare federal laws illegal in Nye County and order the sheriff to take up armed combat. I’ve been asked to draft ordinances to ban drones in Nye County airspace because there’s tens of thousands of such flights dropping chemicals on us every day,” he said sarcastically. “I’ve actually had the argument that the federal detention facility was illegally dumping items in the sewer system that was causing the sewer lines to explode and Blagg Road to collapse.”

Kunzi lamented that he wished he had more time for real problems.

“These are constantly things I have to do instead of real things trying to make this county better and it’s so amazing now I’m being attacked for firing out at this insanity. We have public officials lashing out at their employees for talking about some of the things they are doing. I’ve been accused of committing ‘malpheasants,’ and this is truly written in an e-mail,” Kunzi said.

He added that he didn’t know if the word referred to a cross between a pheasant and a mallard duck, or if someone were simply concerned he wasn’t doing his job properly.

In another Matson reference, Kunzi was told because there are employees with mental problems they have to undergo “physiological” examinations.

“Unfortunately, this is the type of stuff that we’re dealing with, and unfortunately, if we don’t really come together and do something, they’re close to having a majority on our board of county commissioners. The unfortunate thing is the people who have all these crazy ideas are all Republicans, but we have to understand that frankly this is not a true Republican Party that is expressing some of these views,” he said.

Kunzi said he’d hate to see local politics stoop to the level of the crippling polarization that is paralyzing Washington.