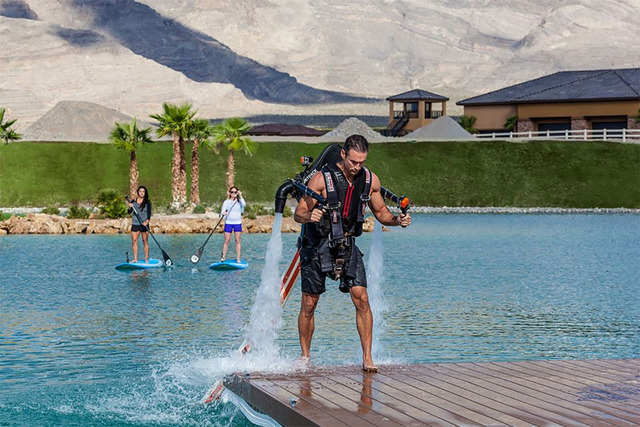 Triple-digit temperatures served as an appropriate outdoor setting for the public opening of Lake Spring Mountain over the weekend.

The four-acre freshwater lake is one of several various attractions at the Spring Mountain Motor Resort and Country Club.

Director of Marketing Todd Crutcher said individuals and families spent the weekend swimming, playing volleyball and lounging along the lakeshore.

“We were really delighted with the reaction from the public,” he said. “We had people from Pahrump and Las Vegas just coming out and taking advantage of the lake. I thought we had a great turnout but it can always be more. But for the first day, it was perfect.”

Crutcher said additional activities included kayaking, rafting and the popular pedal boats, but one activity seemed to attract much interest.

“It seemed like most people were doing the paddle boards because it’s something that they could do, where many of them haven’t experienced it before,” he said. “It’s very affordable and they just got out there and enjoyed the relaxing atmosphere of this desert oasis.”

Though the facility was initially created for members, Crutcher said Spring Mountain officials wanted to eventually open it up to local residents to enjoy.

“Our CEO, John Morris, has always planned to have something that would be open for the general public to enjoy,” he said. “We’ve just been taking time with all of the development because there’s bigger plans to make this area a great destination for local families as well as for our members. I know there’s a hotel that’s being talked about as well as a restaurant near the lake.”

Crutcher said the public opening was a precursor to another special event happening this weekend, dubbed “Hydro-Fest 2016.”

The event features a variety of activities beyond what’s known as ‘Hydro-Flight’ demos and competitions.

Crutcher said Hydro-Fest 2016 will bring together the talents of the best Hydro-Flight athletes in the world for a single event.

Additionally, he said the weekend will be a hybrid of sport, competition, festival, music and fun for all, as the event will have something for everybody to marvel at.

“It is free to the public so we’re inviting everyone to come out,” he said. “There will be different demos and other activities that we will be doing. We also will have a band playing music in the evening. Folks can check them out and still swim in the lake.”

Crutcher also said activities at the lake will continue throughout the summer.

For additional information call 800-391-6891 or logon to www.racespringmountain.com.