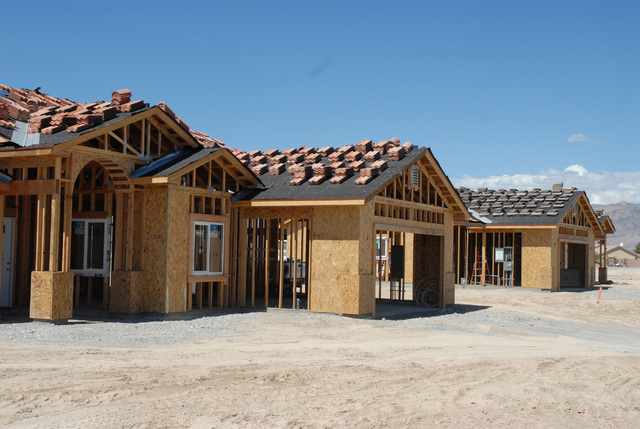 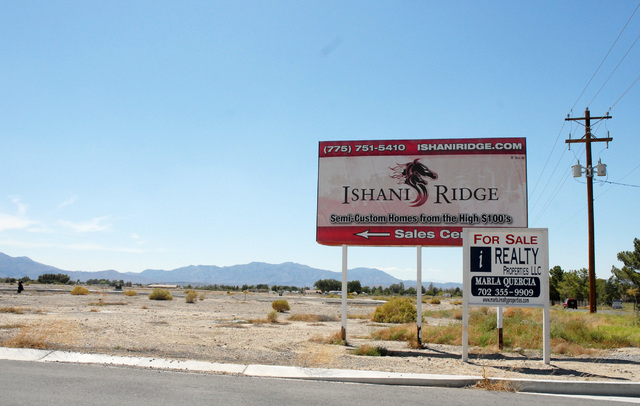 The Friday edition of the Las Vegas Review-Journal lately is filled with advertisements for housing developments like Pardee Homes Alterra and Solano developments, William Lyon Homes projects like Tuscan Cliffs in Southern Highlands, along with Beazer Homes developments like Dorado Skies, The Cliffs at Dover, Weston Hills and Rancho Bella.

Does that mean Pahrump developments that began in the housing boom only to die during the recession will also be resurrected soon? Developers who could be contacted were cautious in their remarks about when their Pahrump projects would resume.

The Las Vegas Review-Journal reported last April nearly half the names on the list of Southern Nevada’s most active builders during the housing bubble were gone, either through bankruptcy, acquisition or self-imposed exile.

Beazer Homes donated a 2.23 acre park under a development agreement with Nye County for the Burson Ranch subdivision off Malibou Avenue south of Manse Road, but only 33 of the 586 planned residential homes were constructed.

In an emailed reply to a query from the Pahrump Valley Times, Bill June, Nevada division president of Beazer Homes said, “Beazer Homes continually monitors the housing market in Pahrump, NV. We are confident that we will reopen the Tesora community when the demand in the Pahrump market strengthens. At this time we are unsure of the anticipated timing of the community re-opening but will keep you apprised when the Tesora community is feasible.”

Concordia Homes of Southern Nevada built 45 homes at its Pleasant Valley subdivision off Homestead Road, just south of Lakeside Casino. Gidget Graham, who was president of Concordia Homes from 1994 to 2012, is a real estate broker for a Henderson real estate firm; she didn’t respond to requests for an interview. Nye County Assessor Shirley Matson said Rugged Oaks Investments LLC, based in El Segundo, Calif., acquired much of the property in the Concordia Homes subdivision.

Celebrate Homes was going to build 405 residential lots on North Blagg Road; however, they ended up being sued by Wulfenstein Construction for $388,227 in paving costs.

Other developments show more positive signs of life. Nye County is working on a realignment of Manse Road requested by Adaven, a company that proposed a Mountain Falls South development, on the south side of the road.

“We work every day on the project. We’re actually looking forward to having the market improve so we can get started. I don’t know when that is going to be but hopefully we’ll start before too long,” Adaven executive Mark Dunford said.

Adaven has a development agreement to build approximately 4,300 residential lots, he said, adding news of the improvements to Highway 160 from Red Rock Canyon to Mountain Springs will help development in Pahrump.

“We’re watching it closely; honestly we’re excited to have the market improve and we’d love to get started but we’re not going to get started until it’s the right time,” Dunford said.

Adaven has eight to 10 projects currently under construction in Las Vegas, he said, adding Adaven, which is affiliated with America West Homes, built 17,000 homes in Las Vegas. The housing development would be close to amenities at Mountain Falls like the golf course, Dunford said, “they’ve got the mouse trap, there’s no question.”

But when it came to Pahrump, Ritter said, “It’s probably going to be a little way off. The market’s going to drive it. The price of houses in Vegas has to go up enough that it makes sense to make the drive out here to save the money. Prices are going up slowly.”

“After this last six years I’ve given up trying to predict the market. We’ve kept the project together pretty much, we’re just waiting for the timing to be right,” Ritter said.

The state engineer has raised a concern over future water availability in Pahrump. Ritter agreed water is a concern.

“We built drought-tolerant communities so we’re very much focused on limiting the amount of water that we use,” Ritter said. Developments like Mountains Edge use drip irrigation systems, he said.

Brock Metzka, a part-owner in Pahrump 88, which had plans to build 252 lots at the Ishani Ridge subdivision off Wilson Road near West Street, underlined bigger problems building in Pahrump where there aren’t as many public builders like William Lyon Homes with outside financing.

“As of right now it’s still on hold. The market in Pahrump there’s not enough homes being built out here to do anything. Vegas is busy, but Pahrump’s not,” Metzka said. “Vegas started getting hot last year. We’re still a full year away.”

The Pahrump Building and Safety Department issued 52 building permits for single-family homes in 2013, more than double the 22 issued in 2012, but still a long way from the 717 single-family homes permitted in 2006 at the height of the housing boom. William Lyon Homes continues to build homes in Mountain Falls, they pulled permits to build 29 homes last year. The company constructed a handful of homes even in the worst years of the recession.

“I think it’s the strong land plan and amenities and product that gives the homebuyer a sense of value and a lifestyle that works within their price point,” said Terry Connelly, vice-president of William Lyon Homes Nevada Division. “We’ve just re-evaluated the price points with the amenity levels that the homebuyer gets to again just make it a product that meets their price points and we’ll continue developing and evolving various product lines as the market continues to improve responding to the demand.”

He said the percentage of Las Vegas commuters buying homes is less than it was during the housing boom. But he expects to see more people buying homes in Mountain Falls and commuting to Las Vegas as home prices increase over the hump.

“That’s that product and lifestyle we offer. It can be all single-story homes on big lots versus a small two- story or three-story home in Las Vegas,” Connelly said.

Verco pulled building permits to build four single-family homes last year on Stubblefield Street in the Artesia subdivision. Greg Hafen II, part of the Hafen family that developed Artesia, said Verco and Mountain View are both building homes there now. He said in the last year a dozen new homes have gone up in Artesia.

“Right now they’re building speculative, the prices have come up, they can build on a per-square-foot basis and compete with the resales out there. There aren’t as many foreclosures and short sales as there were during the recession. They were able to build them and sell them, which is good news,” Hafen said.

Pahrump Building Inspector Bill Browning backed up Hafen’s opinion, in commenting on the 2013 housing activity at the start of this year.

“The appraisals are now being appraised at a point where the builder can afford to make a little money,” Browning told the Pahrump Valley Times.

Brian Gordon, a principal at the Las Vegas firm Applied Analysis, said his firm is seeing a number of master-planned communities moving forward on the periphery of Las Vegas, like Inspirada in Henderson, which was a Focus Group project, or projects like Park Island and Sky Canyon in the northwest.

“The home building industry is starting to find its footing in the post-recession environment. The world is much different than it was during the boom era. A number of those mothballed communities have come to life in the Las Vegas Valley. We’ve seen a number of communities either change hands or fire up operations again,” Gordon said.

“During the peak boom era of the early to mid 2000s, Pahrump hit the radar of developers that were identifying future expansion opportunities. Not unlike Las Vegas, Pahrump has seen its ups and downs and will likely see those projects over through the cycle at some point in time. It becomes a question of when and why,” he said. “The attractiveness of a lower price point was a key element of the market dynamics back in the early 2000s that attracted developers to the area as well as potential home buyers. Assuming those dynamics unfold again there may be an opportunity for some of those projects to re-ignite in the post-recession world.”

The gap between sale prices of existing homes and the cost to construct new homes has narrowed, since the inventory of distressed homes from short sales and foreclosures has worked through the system, Gordon said. The median price for homes on the resale market in Las Vegas Valley is now $167,500, after hitting the floor with a median price of $100,000 in 2012, he said.

Nye County Planning Director Darrell Lacy said most of the housing subdivisions still have development agreements with the county.

“We have had some contact with some of them, nothing more than people calling in, asking about some specific issue. The only ones that currently have things building on them today is Mountain Falls, of course, Artesia’s had a few spec homes going in, custom homes, and then there’s been one or two built in the Winery area and then occasionally a few built in one of the Preferred Equities plots,” Lacy said.

“The ones that have lots ready to build on would be Beazer and Pleasant Valley. Those would be the ones that could most easily start something back up. They have lots with streets in front of them and pipe in the ground that could easily get started up,” he said.