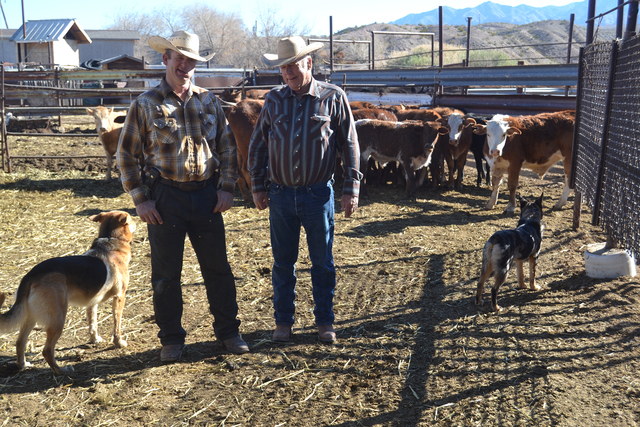 Clark County rancher Cliven Bundy, right, and his son Ryan, finish a gather of cross-bred young-stock cattle from public lands adjacent to the family’s 100-plus acre farm in Bunkerville in January 2015. The attorney in the Bunkerville standoff case is asking that footage gathered by an undercover film crew not be allowed to be used as evidence. Lillian Browne / Pahrump Valley Times

A defense lawyer in the Bunkerville standoff case has filed court papers seeking to toss out evidence obtained against his client by undercover law enforcement agents posing as a video production crew.

Terrence Jackson says in the court papers that he wants a hearing on whether to bar federal prosecutors from using an interview his client Gregory Burleson gave to the undercover company Longbow Productions in October 2014.

“An evidentiary hearing will establish that Longbow Productions had supplied Burleson multiple alcoholic drinks before the interview, then continued supplying him with alcohol with the deliberate intent to induce him to make incriminating admissions,” Jackson wrote. “The evidentiary hearing will also show that Longbow Productions is a quasi-law enforcement group designed to investigate the Bundy ranch standoff occurring in April 2014.”

Other defense lawyers in the case told the Las Vegas Review-Journal last month that they believed FBI agents had posed as a documentary film crew for Longbow Productions during the investigation. One lawyer made the same assertion in court documents.

In his court papers, Jackson did not specifically tie the FBI to the mysterious company, though he said he saw FBI reports of the interview with Burleson.

Jackson said the law enforcement agents who interviewed Burleson on camera knew he had a weakness for alcohol and took advantage of it.

The actions of the agents violated Burleson’s due process rights and amounted to “willful and outrageous misconduct,” Jackson alleged in the court papers, which were filed late last week.

Natalie Collins, a spokeswoman for the Nevada U.S. attorney’s office, declined to comment Monday on Longbow Productions, citing the pending Feb. 6 trial. But prosecutors will get a chance to file a written response to Jackson.

Burleson, 52, of Phoenix, is one of 17 defendants, including rancher Cliven Bundy and four of his sons, charged in March with conspiring to assault BLM agents on April 12, 2014, and take back impounded Bundy cattle that had been grazing on federal land.

Prosecutors have alleged that Burleson, who maintains that he is now legally blind and suffering from other medical ailments, was a gunman during the 2014 confrontation. He has been associated with militia groups in Arizona over the years, according to prosecutors.

Defense lawyer Chris Rasmussen said in court papers last month that undercover FBI agents associated with Longbow Productions conducted video interviews of several defendants to “extract admissions” from them before they were charged.

Rasmussen referred to the production company in a motion seeking to narrow a protective order that vastly restricts public disclosure of evidence in the high-profile case.

The lawyer, who represents indicted radio talk show host Peter Santilli, said he and other defense lawyers want to cite government evidence about Longbow Productions and other activity by federal agents during the standoff investigation in public motions challenging the government’s case.

Attorney Dan Hill, who is defending Ammon Bundy, told the Review-Journal last month that his client was interviewed for several hours in Phoenix by Longbow Productions months before he was charged in the Bunkerville standoff.

“I believe that the FBI was pretending to be members of the news media in order to have lengthy conversations with Ammon and others,” Hill said.

Defense lawyer Jess Marchese said his client Eric Parker gave the company a 90-minute interview in Idaho, where he lives.

“From everything that I’ve seen, it’s my belief that Longbow Productions was the FBI,” Marchese said.

The lawsuit alleged there was a conspiracy among them to deny Bundy the attorney of his choice in the criminal case and his right to a speedy trial.

Navarro, an Obama appointee presiding over the case, has refused to allow Washington, D.C., lawyer Larry Klayman to join Bundy’s defense team until he can show her proof that ethical disciplinary proceedings against him there have been resolved in his favor.

Both sides agreed to the dismissal and are paying their own litigation costs.

On Monday, defense lawyer Bret Whipple moved to dismiss the criminal case against Bundy because of constitutional speedy trial violations and the denial of Bundy’s right to hire Klayman.