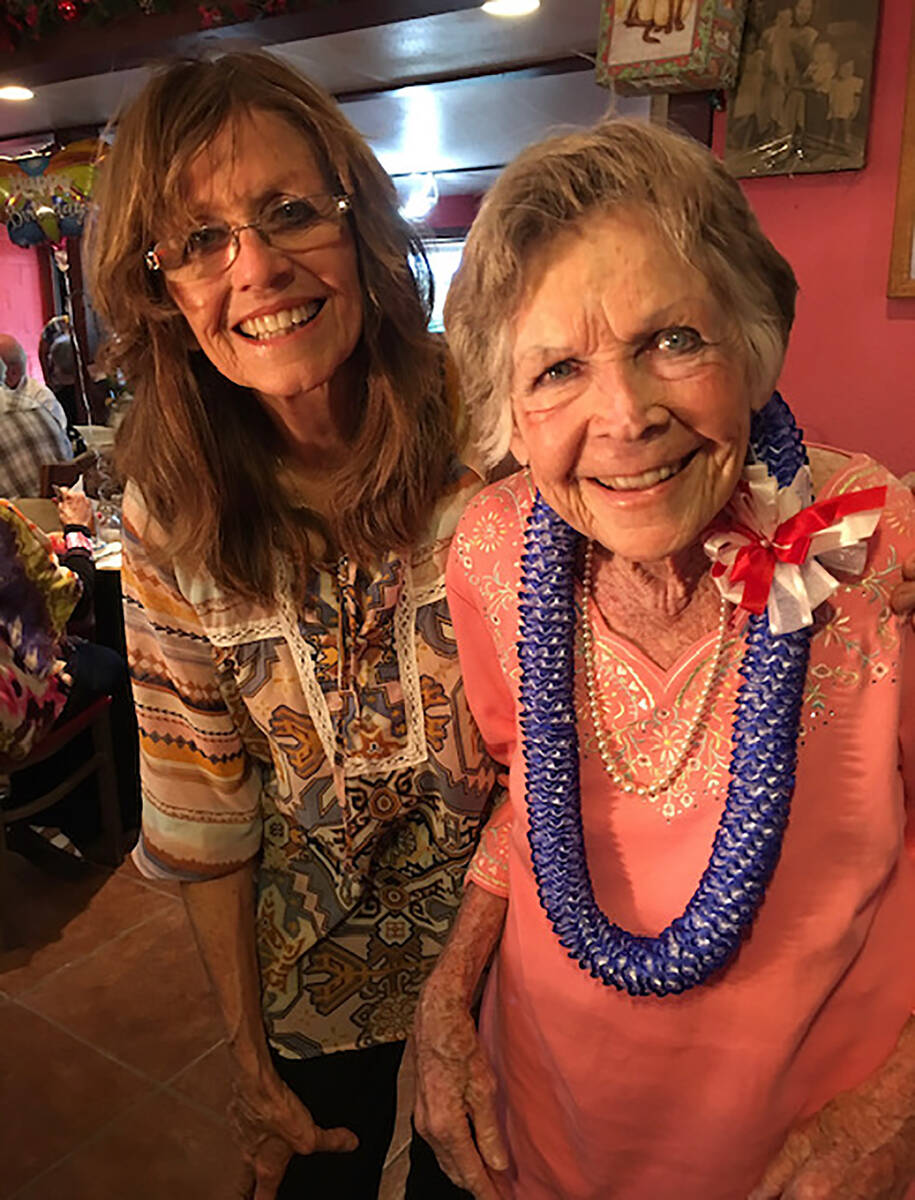 Special to the Pahrump Valley Times Daughter Julie Jennings shares a tender moment with her mother Sue Thompson. Thompson, a legendary country and pop singer passed away September 23, at the age of 96. A celebration of Thompson’s life is scheduled for Friday November 12, at the Church of Jesus Christ of Latter-Day Saints, at 921 W. Wilson Road. The service begins at 10 a.m. 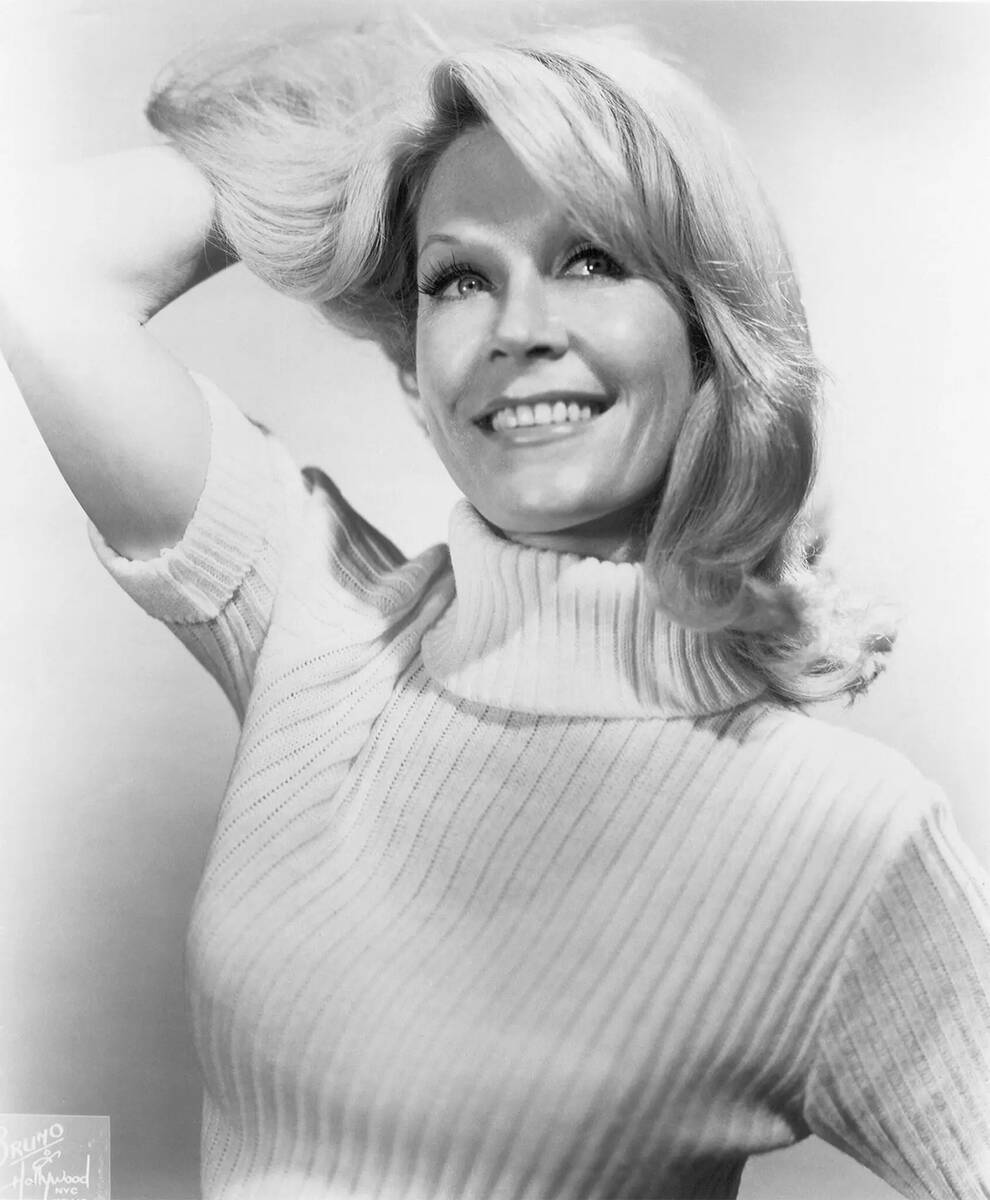 Michael Ochs Archives/Getty Images Singer Sue Thompson in an undated publicity photo, scored high on the pop charts in the 1960s when she was paired with the songwriter John D. Loudermilk. 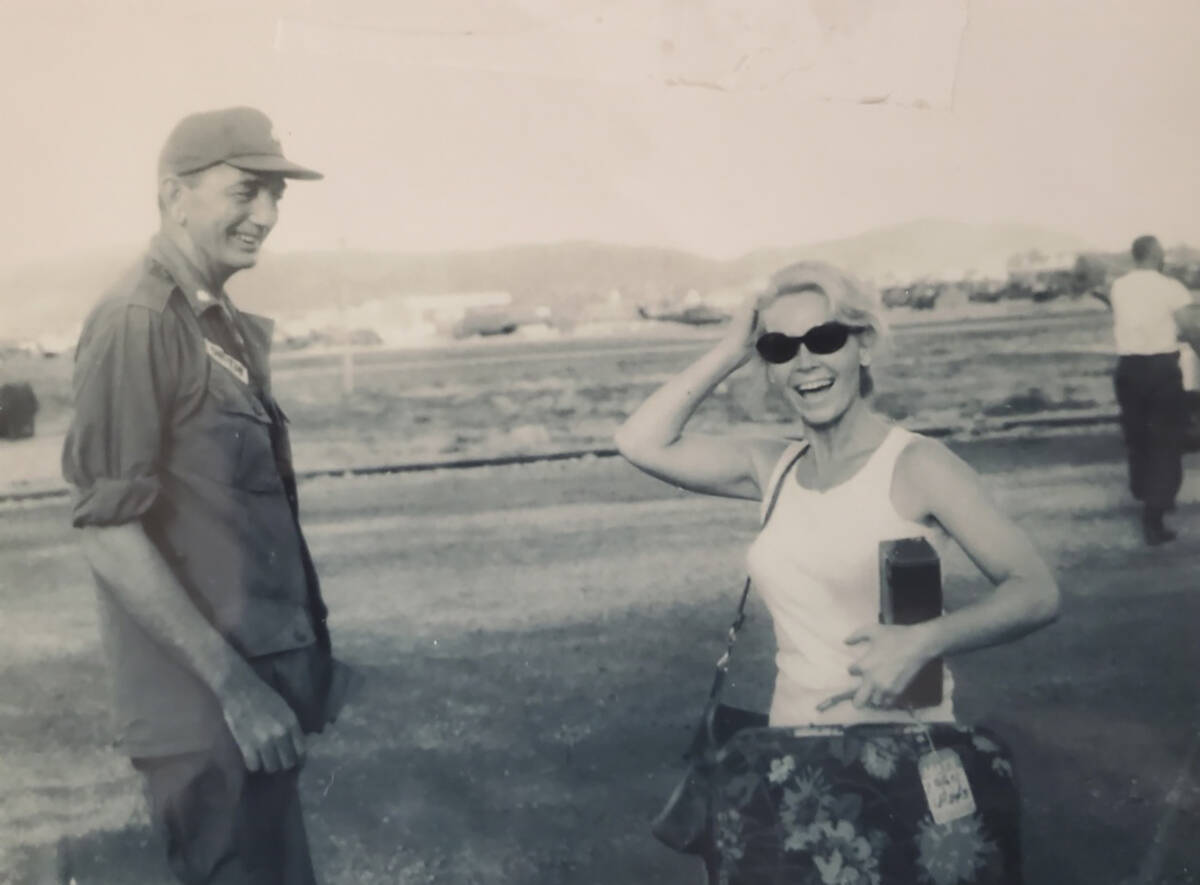 Special to the Pahrump Valley Times In 1966, Thompson traveled to Vietnam to entertain the troops at an American airbase in the city of Can Tho. Thompson, who fell ill for weeks after her overseas trip, suspected that she had been exposed to the chemical defoliant Agent Orange. 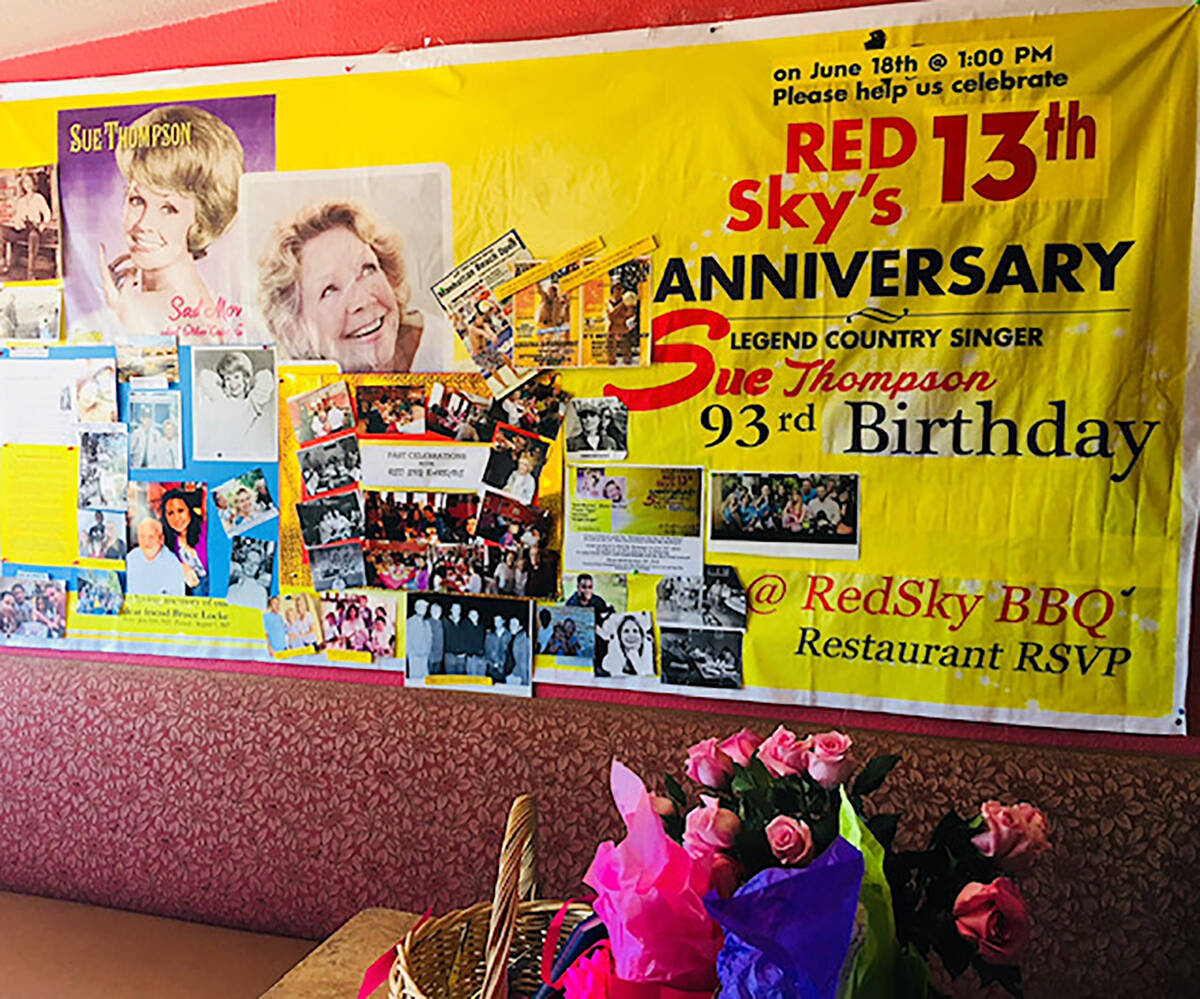 Sue Thompson, born Eva Sue McKee, an American pop and country music singer that started her rise to fame in the late 1940s, died on Sept. 23. She was 96.

Thompson’s son, Greg Penny, said the cause of death was complications of Alzheimer’s disease.

Thompson lived in the Pahrump Valley for over 25 years.

Thompson was born in Nevada, Missouri July 19, 1925, and by the age of 7, she was singing and playing the guitar on stage.

As a child, Thompson was entranced by Gene Autry, and she grew up envisioning herself as a singing cowgirl.

One day her mother found her a second-hand guitar for her seventh birthday, and she performed at every opportunity as she went through high school.

Thompson later moved with her family to live in San Jose, California.

Thompson, according to her daughter Julie Jennings, rose up as a renowned singer whose voice resonated with viewers of the “Hoffman Hayride” television show back in the late 1940s through the late 1950s, where she was known for her distinctive voice on popular tracks from the 1960s such as “Sad Movies (Always Make Me Cry),” “Norman” and “Paper Tiger.”

She also sang at countless venues around the country and overseas, including Vietnam, before settling in Pahrump more than 25 years ago.

When asked about her memories of being the daughter of a famous singer known throughout the world, Jennings said, “it was fabulous.”

“I got to meet a good many people and songwriters who were just so prominent in that field,” she said. “Our home base was in Las Vegas, but I remember one time, me and my brother were driving with her back to Nashville with her beautiful blue car and we were just so happy and thankful that her records were going so well. They were pretty much on every station that you would turn to, so it was really astounding to us.”

Back in 1960, Thompson signed on with Columbia Records, who renamed the singer “Taffy Thomas” and issued one non-charting single under her name.

Not long thereafter, the Taffy Thomas moniker was dropped, and Thompson signed on with Hickory Records.

Roughly a year later, after having issued more than a dozen non-charting singles in her decade-long recording career, Thompson’s “Sad Movies (Always Make Me Cry)” became a No. 5 hit on the pop charts.

She successfully followed it up with the song “Norman,” which reached No. 3 on the charts.

Both of the hit singles were written by songwriter John D. Loudermilk. Both singles sold more than one million copies and were awarded gold discs.

The songs were also chart successes in Australia, reaching #3 and #8 respectively.

Her early 1960s’ hit songs made Thompson a favorite among the teenage crowd and briefly a rival to younger singers including Connie Francis and Brenda Lee.

The latter song, in 1965, was her last Top 30 hit, and her biggest hit in Britain and in Australia, where it reached No. 3 on the charts.

Performing for the troops

In 1966 Thompson actually traveled to Vietnam to entertain the troops.

During that time, she communicated with her parents about what she was experiencing.

“Tonight we are at Can Tho, a huge American airbase,” Thompson wrote to her parents in part. “You can see the fighting and flashes from guns, and hear the mortars. We’re fairly secure most of the time. I will never be the same. I saw and learned unbelievable things.”

Additionally, Greg Penny said that his mother fell ill for weeks after her overseas trip.

Thompson said she long suspected that she had been exposed to the chemical defoliant Agent Orange.

Despite becoming ill after the first trip, she went on other tours to entertain troops, including one the following year when Penny, who was a boy, accompanied her when they traveled to Japan, Hong Kong, the Philippines and elsewhere.

“I remember getting the communication while we were on the road in Okinawa,” Penny said. “They said it was just too dangerous.”

When Thompson returned to performing stateside, she also returned to country music, releasing a number of records, including a string recorded with Don Gibson, while leaving behind the little-girl sound of her hits.

Gibson, a Country Music Hall of Fame inductee, wrote such country standards as “Sweet Dreams” and “I Can’t Stop Loving You”, and enjoyed a string of country hits from 1957 into the mid-1970s.

“I don’t want to be ‘itty bitty’ anymore,” Thompson told the Times of San Mateo, Calif., in 1974. “I want to project love and convey a more mature sound and a more meaningful message.” Country music, she said, was a better vehicle for that because, “country fans pay more attention to what is being said in a song.”

Even before her pop hits, Thompson was a familiar sight on stages in Nashville and Nevada as well as on the country fair circuit.

Those hits made her even more in demand in Las Vegas, Lake Tahoe, Reno and many other cities.

“Most popular songs actually are country-and-western songs with a modern instrumental background,” she told the Reno Gazette-Journal in 1963.

Thompson said her favorite among the songs she recorded was “You Belong to Me.”

Roughly a decade ago, when she was in her 80s, her son Greg Penny, a record producer who has worked with Elton John and other top stars, recorded her singing the song to a guitar accompaniment.

Family friend Jacki Freeman noted that Thompson made many television appearances throughout her successful career.

“Sue was on “Hee Haw” and she was friends with Glen Campbell and every country star from the ’60s and ’70s,” Freeman recalled. “She is considered a pioneer in country music and the amount of records she sold over the years would be equal to an awful lot these days. Unfortunately, this town has never given Sue the recognition that she deserved.”

In addition to Jennings and Penny, Sue Thompson is survived by eight grandchildren and 12 great-grandchildren.

Freeman also said a celebration of Thompson’s life is scheduled for Friday, Nov. 12, at the Church of Jesus Christ of Latter-Day Saints, at 921 W. Wilson Road with a musical retrospective on Thompson’s career.

In lieu of flowers, Thompson’s family requests that any monetary donations can be sent to Desert Haven Animal Society at 1511 Siri Lane.