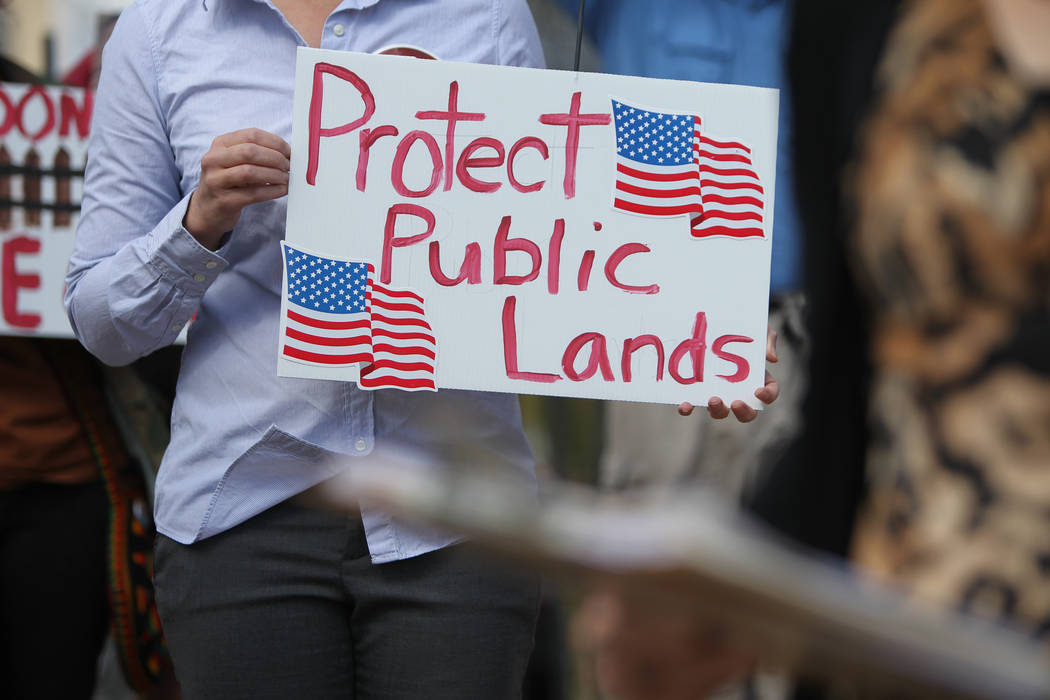 Jaina Moan holds a sign during a rally against Senate Joint Resolution 1, a proposition that will transfer federal public lands to the state of Nevada, outside of the Grant Sawyer Building in Las Vegas. Erik Verduzco/Special to the Pahrump Valley Times

CARSON CITY — The decades-long battle over federal ownership of nearly 110,000 square miles of Nevada is about to be re-engaged at the Nevada Legislature.

With about 85 percent of those acres under control of a variety of federal agencies — primarily the U.S. Bureau of Land Management — some Nevada political leaders want a transfer of as many as 7 million acres to state control in a first phase that could eventually see large tracts of land become state lands.

Approximately 92 percent of the 18,159 square miles of Nye County is controlled by the federal government.

Economic development is the primary driver for the introduction of Senate Joint Resolution 7, but some proponents see it as the first step in a state takeover of much of the federal public land in Nevada.

U.S. Rep. Mark Amodei, R-Nev., had a land transfer bill introduced in Congress in the last term, and though it died, the issue could come up again in this session. Republican Gov. Brian Sandoval has supported a transfer of some federal lands, as has U.S. Sen. Dean Heller, R-Nev.

State Sen. Pete Goicoechea, R-Eureka, a rancher with more than passing knowledge of the public lands issue, is a co-sponsor of the resolution, which has not been scheduled for a hearing.

Chances for such a transfer might have improved under the Trump administration, he said.

Opponents are concerned the lands would be sold off by the state, decreasing access for everything from off-road vehicle use and hunting and fishing to hiking. They also argue that Nevada could not afford to manage millions of acres of federal land, citing the multimillion-dollar cost of fighting wildfires.

“We fought it last time, and we’ll fight it this time if it goes forward,” said Annette Magnus-Marquart, executive director of Battle Born Progress. “How would the state pay to manage the lands? We can’t educate our kids properly. We can’t afford to pay to fight a fire.”

A nearly identical resolution seeking such a transfer was approved by the Republican-controlled Legislature in 2015 and sent to Congress. A hearing on that resolution even prompted a visit by Bunkerville rancher Cliven Bundy to the Nevada Legislature.

The new measure likely has a dim future, given that Democrats control the Legislature.

Goicoechea said a good case for transfer to state control can be made for four categories of lands. Those lands could total 5 million acres or more, according to an analysis by the Nevada Land Management Task Force, which in 2014 issued a report arguing that the state would benefit from such a transfer.

The four categories are:

Checkerboard lands. Estimated at about 4.2 million acres, these public lands alternate in sections with private lands along the Union Pacific railroad corridor.

The private sections were granted to the railroad to pay for construction of the transcontinental railroad more than a century ago.

Goicoechea said the lands are unmanageable in their current configuration.

Lands already inventoried by the BLM and other federal agencies for disposal, estimated at about 1 million acres.

“They are trying to sell them,” Goicoechea said. “Give them to the state, and let the state generate some profit.”

Recreation and public-purpose lands, estimated at 200,000 acres. While small in number, these lands are being used for a variety of purposes around the state, from rodeo grounds to public schools to flood control. The entities using these lands pay rent to the BLM.

“We’ve got 58 schools in Clark County built on RPP lands,” Goicoechea said. “And we need to tell the federal government, no, we’re not going to pay you any more. We need title.

“Transfer those back to us,” he said. “They don’t want to do it, because they are getting lease revenues.”

BLM “split-estate” lands, estimated at about 300,000 acres. These are lands where the surface rights are privately owned and the subsurface mineral rights are federally owned.

“We’re enforcing the regulations,” Goicoechea said of the lands. “That’s why I have always been a supporter of Phase 1.”

A process exists for limited federal transfers through acts of Congress, including one sponsored by Amodei that sent 10,400 acres of public lands to the city of Yerington and Lyon County for economic, recreational and cultural development. It has allowed a copper mining project there to proceed.

This system for land transfers works and should be allowed to continue, she said.

Magnus-Marquart said broad public support remains for leaving the public lands as they are.

“People want the lands kept open for public access, not sold off to the highest bidder,” she said.