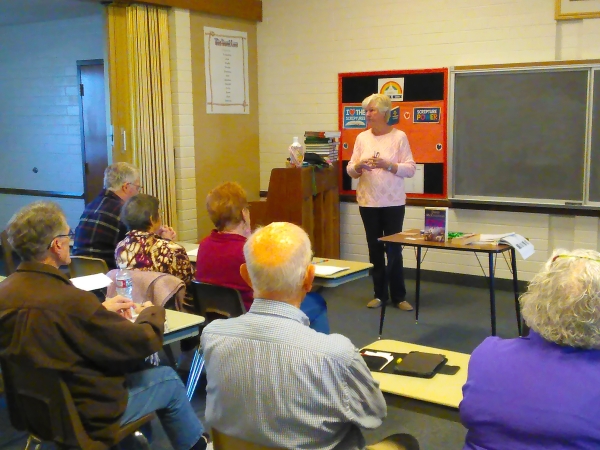 If you ever wondered who you descended from or facts about your ancestry makeup, Pahrump’s Mormon church along Wilson Road can help you get started.

Each Wednesday, the local Church of Jesus Christ of Letter-day Saints offers family history classes where participants can gain a better understanding of themselves, as well as their family history.

Pahrump resident Carol Zerkle, who teaches the family history class each Wednesday, said the pursuit of family history and origins are shaped by various motivations.

She was surprised about what she learned after searching her lineage, an active pursuit since 1969.

“My family came out of the hills of Tennessee and Virginia,” she said after a recent class. “They have done the DNA and I am 5 percent black, 5 percent Native American and the rest is European.”

Zerkle noted her interest in learning about family history came about from her son’s homework assignment years ago.

“My son came home with a pedigree chart for his boy scouts and I had to fill it out,” she said. “Of course it had his name, my name, his dad’s name, as well as my grandparents. I filled it out and sent it with him and he brought it back the next week. The teacher wanted more information about a couple of generations that was missing. I called my mom and grandmother, and of course, I had to call my husband’s parents and we started filling it out a little better and it just sparked an interest.”

That interest, Zerkle said, spurred her to embark on a wider effort to learn more about her ancestors.

Some of what she learned would raise a few eyebrows, even by today’s standards.

“I discovered my grandparents were second and third cousins, so my genealogy really kind of runs around in a circle,” she said with a laugh. “When my ancestors came to the Americas, they were Portuguese sailors that got stranded in the Americas long before Christopher Columbus arrived. They are called Melungeon people and they came out of the hills of Tennessee, Virginia, Kentucky and different places like that.”

Zerkle also mentioned one of several television programs aimed at generating interest in genealogy where family members interview other family members about their personal history.

“It is on the PBS stations across the United States, where young teenagers are interviewing their grandparents for posterity reasons,” she said. “I don’t have all the details, but I’m going to get one of my grandchildren to do that for me.”

During a recent class, Zerkle was teaching more than a dozen ‘students’ about the U.S. Census and how it relates to genealogy.

She noted the first census was taken in 1790.

“We did the census class to learn how to use the census and what it was for and why it came about to find our ancestors,” she said. “We are just trying to learn who we are, what we’re doing here on earth and that’s one of the resources that we use. The census was taken for tax purposes, to count everyone so they could have proper representation for each of the 13 colonies and that’s how the census began. They also had on there, about how many slaves there were at the time because they needed to find every man that could fight the war if England came back on us again.”

She said the interest in classes is increasing, compared to when they first started.

Luellen also learned she descended from a family of fine craftsmen.

“My great-great-grandmother’s sister was married to the artist that carved all of the eyes of the presidents on Mount Rushmore,” she said. “He was one of the guys who hung off the mountain and chiseled the eyes. He also used a little dynamite. He was an incredible craftsman. I have been there and seen his work and I’ll be taking my children one day, as well as my grandchildren and great-grandchildren.”

The family history classes are free and are open to the entire community.

“We are going to do the history about how photographs came into being and how to date them and what information you can glean off of a photograph,” she said.