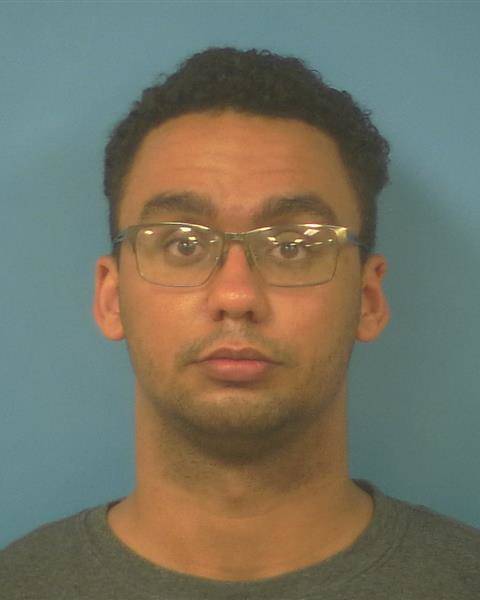 Selwyn Harris/Pahrump Valley Times Walmart assistant manager Kyle Johnson faces one count of embezzlement after confessing to stealing more than $3,900 from the retailer. Johnson, who claimed to be in dire financial straits, was taken into custody while at work on Tuesday morning, April 12.

An assistant manger at the Pahrump Walmart was arrested on suspicion of embezzlement after Nye County Sheriff’s Office deputies were called to the store on Tuesday.

Nye County Sheriff’s Office Deputy Elias Armendariz was dispatched to the store just before 7:30 a.m., on Tuesday, April 20, in reference to a reported theft, according to his arrest report.

“Upon my arrival, I met with an asset protection employee who stated that one of the employees had stolen large amounts of cash from the business,” Armendariz’s report stated. “The asset protection employee stated she was alerted by another employee about the situation and came into the asset protection office and explained what happened. The employee stated her register was set, which it should not have been when she came in. She pulled the transactions from the register, which only showed returns. There should not have been any returns at that time since they were not open for business. She then checked the drawer and saw no money missing. She then went to check the cash advances from their recycler and saw there was money withdrawn from there.”

The report went on to state that the employee accused of taking the cash, was identified on video as Kyle Johnson, an assistant manager at the retailer.

“She showed me some of the video footage she had collected and the footage showed Mr. Johnson, who was identified in the video, standing at the register in the customer service area,” Armendariz’s report noted. “He then pulls out his phone and begins to type into the monitor of the register. The asset protection employee stated he was typing in bar codes for returns of televisions. She also stated that he did not have any televisions to return.”

Additionally, Johnson stands accused of allegedly using a handheld device to override the register, as there were no receipts for the non-existent TVs.

“She then showed me footage of Mr. Johnson entering the cash advance room and pulling money from the recycler,” according to the report. “He then left the room and placed the money in his rear pocket. Mr. Johnson was questioned by Walmart staff prior to my arrival. During that time, he had filled out one of their voluntary statements and admitted to taking the money on two occasions. He went and pulled money from the recycler on April 19, and again on April 20. The total amount of money he had taken summed up to be approximately $3,912.”

After being escorted to the front of the business, Johnson admitted to taking the money, according to Armendariz’s report.

“I advised Mr. Johnson of his Miranda rights and asked if he would answer my questions,” Armendariz noted. “He agreed to speak with me and confirmed he took the money from the recycler on both days. He stated he took the money due to being in a bad financial situation and was attempting to help his family, who is facing eviction.”

As a result of his admission, Johnson was arrested on suspicion of embezzlement and transported to the Nye County Detention Center, according to the report.

This isn’t the first employee at the Pahrump Walmart to be arrested for financial crimes. Back in April of 2019, another Walmart assistant manager was arrested and charged for embezzling $40,000 from the retailer.