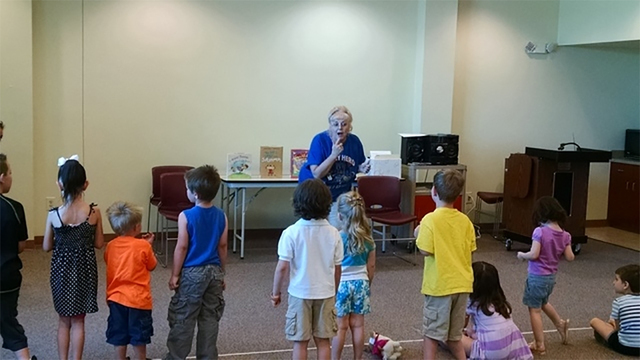 Pahrump Community Librarian Brenda Gibbons interacts with children during the library’s annual Summer Reading Program in June 2015. Tuesday's summer read was the last one for Gibbons, who plans to retire next year after nearly 20 years. Special to the Pahrump Valley Times

This past Tuesday was Gibbons final day for her popular childrens summer reading program, designed to encourage kids to embrace reading.

Ive been doing the summer reading program for 19 years, and its all about reading to kids and allowing kids to read aloud, she said. The reading program will continue, but I am going to retire next year. I began working at the library back in 1997.

For most of her life, Gibbons has worked in the private sector in the areas of retail and waitressing.

She said shes lived all over the western United States, after moving from Independence, Missouri.

She noted that she actually considered retiring a few years ago.

Technically, I could have retired about two or three years ago but I thought no at the time, she said. Now I have decided that I am ready. I dont have a final day just yet, I still have another winter reading program to go through but its not as involved as the summer program.

Once she does walk out of the library for the final time, Gibbons indicated shes not exactly sure what she will do in her leisure time.

I dont think I will do much of anything except maybe get caught up on cleaning stuff out of my house, because when I leave this world, my kids wont have to deal with all my stuff that I have collected, she said. I do have some ideas for volunteering my time.

As an obviously avid reader, Gibbons said she will continue to do so while at home.

She noted that she reads everything. I want to keep on top of whats going on, but theres so much to read that I cant keep up with, but Im doing the best that I can, she said with a laugh. I also listen to a lot of books on CD. I listen to everything from history to biographies to fiction. I just like everything. I dont think I would be a good contestant on Jeopardy because I cant seem to retrieve all of that trivia.

Gibbons also spoke about how social media is affecting how and what the younger set reads, as devices such as E-Books and Kindle enable users to browse, buy and download books, magazines and newspapers.

When I first started, the teenagers were the ones who were checking all of the books out, she said. They like a lot of different authors and a lot of different series of books as well. Of course the vampires are really popular right now. The person who had the job before me said we had only 15 books in one shelving area. Right now, we probably have about 12 bookcases and the kids and teens are always checking those books out.

Traditionally, libraries were places individuals would visit for some quiet time while enjoying a good book.

Gibbons said thats not always the case at her library.

This particular library is not quiet all of the time because the childrens program is not very quiet, she said. When we have our programs, we sing songs and play games, as well as read books aloud. They also do crafts. Were not really all that quiet, but we do have rooms where we dont disturb the whole library. There have been times when we are taking our marching band through the entire library for a specific occasion.

Gibbons said her two-plus decades at the library have been very gratifying.

She noted that she had the privilege of witnessing kids become adults during her tenure.

The sad part for me is that its hard to remember all of their names, so I just say hi, how are you? she said. What I will miss the most is the kids, because its always fun seeing them and how excited they get about the different things we have here at the library, such as the crafts that we do. I have seen the kids that I had many years ago and they come back in and they ask if I remember them. Its just been wonderful during my time here.