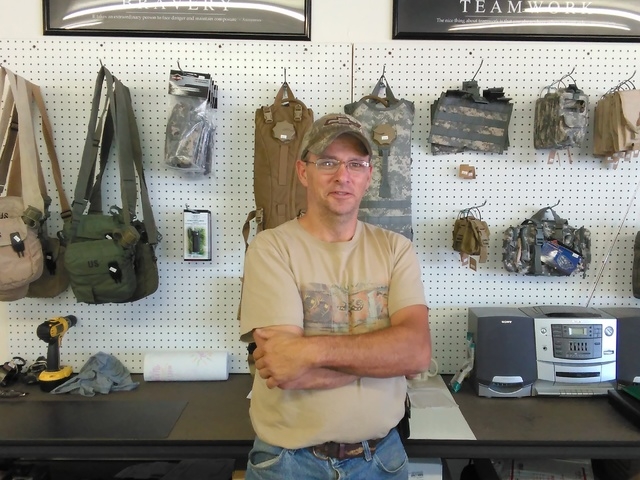 Kubat, who moved to the community roughly three months ago, opened his business, Pahrump Valley Army/Navy at 168 East Emery St., earlier this month.

He describes his business as an Army/Navy surplus store with a strong focus on survival for those who travel and hike.

He said business so far has been better than he expected.

“I opened about two weeks ago and things seem to be going pretty well,” he said. “I am happy that people are coming in to see what I have to offer.”

Among the numerous items and supplies offered are necessities that anyone who enjoys hiking, exploring or regularly travels, may want to have at their disposal.

“I have a little bit of everything, from solar panels that will charge up your cell phone and eventually GPS units,” he said. “I’ve got a lot of Army combat uniforms and battle dress uniforms. I carry combat boots and a lot of survivalist vests and backpacks. They are items that would be considered a necessity in the outdoors.”

With daytime high temperatures exceeding 115 degrees this week in parts of southern Nevada, Kubat said people need to be mindful of how fast they can be affected by the heat, especially if they find themselves in an unfortunate circumstance.

He noted there are both pros and cons when trying to survive in extreme cold compared extreme hot weather.

He also said someone who sustains a cut or wound is likely to bleed more in hot weather, rather than cold weather, as blood tends to thin when the body is warm.

“Down here in the desert you have the heat and also the disorders that go with that such as heat exhaustion and heat stroke,” he said. “Those can both sneak up on you but the big thing out here is remaining hydrated and having the ability for purifying your water if you’re out in the desert. We do have some water purification systems on order and they’re coming.”

So far, Kubat said a majority of his clientele are area veterans and outdoor enthusiasts who visit his business.

He hopes to see additional customers throughout the year.

“There’s a lot of ex-military who love this store and I also have a few survivalist who are coming in,” he said. “I think Pahrump is a good market for what I have to offer. I have wholesale sources all over the U.S., and I try to keep all of my items domestic and American-made to keep the men and women in this country working.”

Kubat subtitled his business “Home of the Polish Prepper,” which he named after a YouTube that he is starting up to promote preparedness for different situations like natural disasters, wildfires and flash flooding, which is common in southern Nevada.

He said, everyone, whether they know it or not is a prepper.

“If you have a spare tire in your car, you are prepared for a flat tire, so you could say that everybody is a prepper in one form or another,” he said. “This just takes it to the next level. It’s a matter of being safety-conscious. You can call it an insurance policy.”

As a guide at Glacier National Park in Big Sky Country, Kubat said he and others have relied on his survival skills more than once over the years.

His main reason for moving to the Pahrump Valley was the weather.

“I’ve been freezing for most of my life living in the North Country,” he said. “After heavy rains, Montana will dry up quick, but then you have to worry about the fires. I am suited for the heat out here because I like the hot climates. In the summertime, the desert is not a friendly place and you have to go in prepared.”

Weather conditions aside, Kubat spoke of an occurrence which is fairly common to those living in Montana, run-ins with the wildlife.

In fact, one of the first items greeting customers at his business is an enclosed crate containing five baby rattlers.

Overall, Kubat said part of being prepared is having the proper knowledge of the area one decides to venture into.

“I carry survival books because your mind is your best protection and your best weapon,” he said. “There’s so many things to learn about surviving in the outdoors. People can learn what kind of vegetation they can eat safely. I have books coming on natural edible vegetation. First aid is also very important in learning to survive in different areas. There have been people who have starved to death but they didn’t have to.”

Pahrump Valley Army/Navy Surplus is open for business from 9 a.m. to 6 p.m. Tuesday through Thursday. Saturday’s hours are 9 a.m. to 5 p.m.

“If anyone comes in and they have a question on survival, I hope they would feel free to stop in and say hello and I’d be more than happy to talk with him and possibly advise them,” he said.