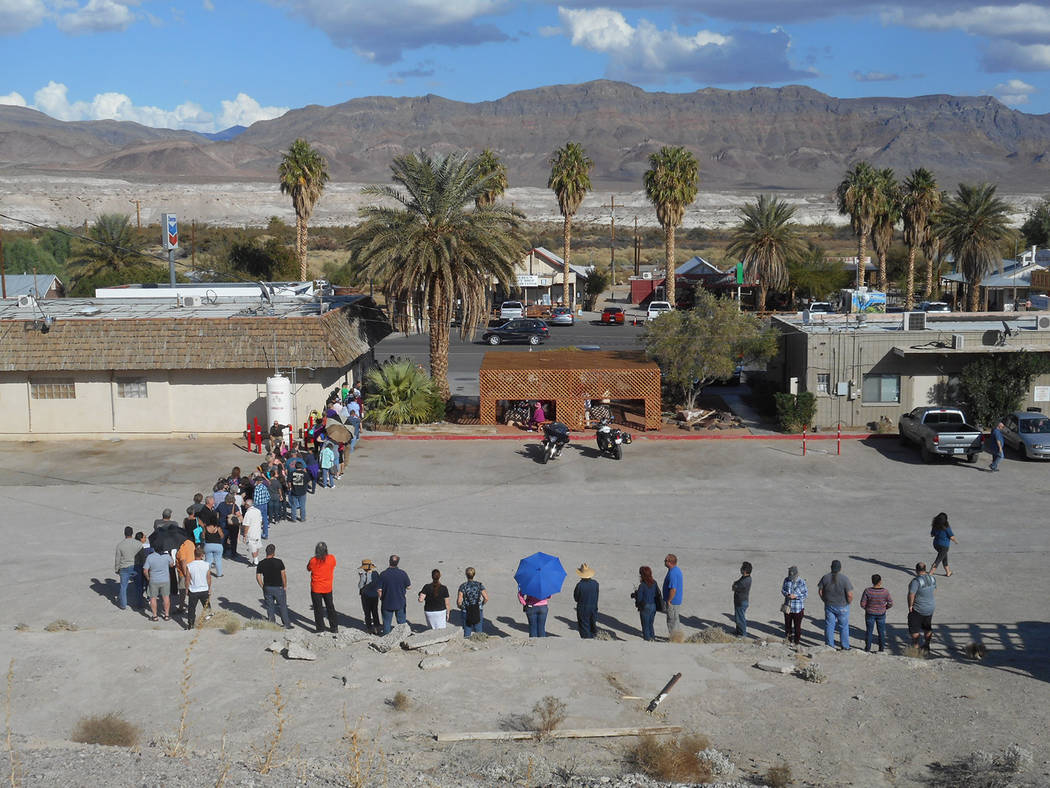 Robin Flinchum/Pahrump Valley Times An overhead view shows a line of customers more than a hundreds yards from the entrance of the Charles Brown General Store and Gift Shop in Shoshone, Ca. Many standing in line questioned why there were no additional registers for customers to purchase their lottery tickets. 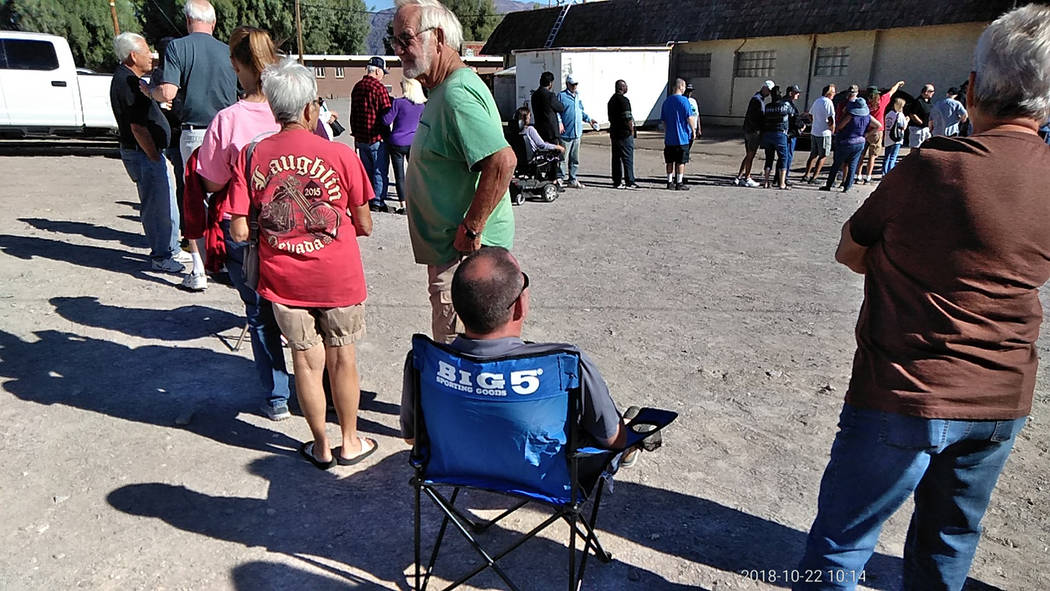 Selwyn Harris/Pahrump Valley Times Pahrump resident Scott Williams sits comfortably while others stand in line at the Charles Brown General Store and Gift Shop along Highway 127 in Shoshone, Ca. on Monday morning. Williams was one of hundreds waiting to purchase a lottery ticket for the Mega Millions jackpot, which as of Monday, was beyond the $1 billion dollar mark. 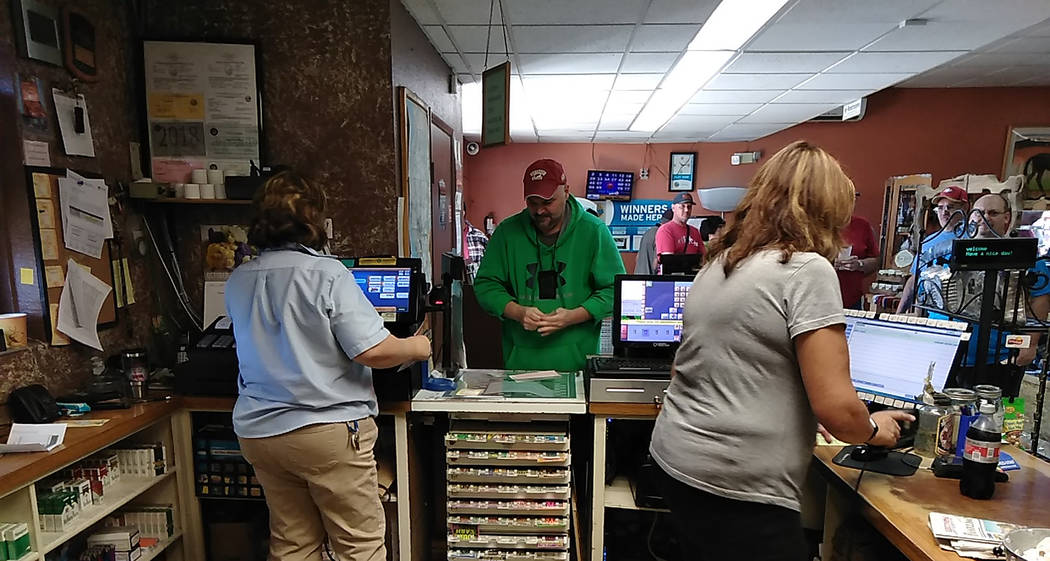 Selwyn Harris/Pahrump Valley Times Employees at the Charles Brown General Store and Gift Shop work frantically to get lottery ticket customers on their way late Monday morning. Lines began forming prior to the store's opening over the weekend, when no one hit the jackpot.

Hundreds of people waited patiently in a line extending more than 100 yards outside the entrance of the Charles Brown General Store and Gift Shop on Highway 127 in Shoshone, about 23 miles southwest of Pahrump on Monday.

The purpose was the fact that no one won the latest Mega Millions drawing over the past weekend, raising the jackpot to more than $1 billion for the Tuesday night drawing.

End of the line

Pahrump resident Jim Bierly was the last in line, just after 10 a.m.

It didn’t take very long for others to queue up behind Bierly as he pondered actually hitting the jackpot.

Bierly said he prefers to go with the Quick Pick method of choosing the numbers, rather than selecting his own numbers.

Additionally, Bierly said he plans to lay down roughly $100 for his tickets.

“If I hit the lottery, the first thing that would happen is somebody would probably have to pick me up off the floor,” he said with a laugh. “After that, I think I would travel a little bit. Actually, I haven’t played the lottery in about four years. Something just told me to go out and try it. You never know.”

Though Pahrump resident Scott Williams had been in line for nearly a half hour, he was still a good distance from the entrance doors, to make his purchase.

He also had the foresight to ensure a bit of comfort as he waited his turn.

“I brought my chair out here with me so I won’t have to stand for such a long time,” he said. “I expect the wait to be about an hour to an hour and a half.”

Like Bierly, Williams also opts for the Quick Pick method, rather than selecting his own numbers.

“I play the lottery sporadically, but of course I had to play this time because it’s above 1 billion dollars right now,” he said. “If I won the lottery, the first thing I would do is probably run away somewhere. I’d just like to go off the grid for a while, and of course, I would definitely take care of all my family.”

Standing just feet from the entrance of the store was a Pahrump couple who chose to remain anonymous.

“We’ve been in line for just a little over an hour but we’re getting close to the entrance.

“If I won, one of the first things I would do is move to Hawaii.

“I do not select my numbers because I prefer to go with Quick Picks. I don’t always play the lottery, but it was just a crazy idea we had this morning, so we decided to come out. I’m going to spend about $100 for the lottery today.”

Another Pahrump resident, who also preferred to remain anonymous, said Monday morning was his second trip out to Shoshone for lottery tickets, after stopping by on Saturday.

“We were here at about 10 in the morning when the power went out, and we were told it wouldn’t be back on until about 3 p.m., so I just went home. Nobody hit the lottery over the weekend so I’m back today. If I won the lottery, I would buy my mom’s house outright for her. That’s the first thing I would do. My wife and I even talked about it.”

The man also had a bit of advice on how things could run more smoothly when the lottery jackpot attracts hopeful multi-millionaires or billionaires.

“I think everybody in this line would probably play the lottery every week if we didn’t have to wait hours in line just to play it,” he noted. “If you had six or seven registers operating, I think you could triple or even quadruple the number of people playing in this area. I don’t see the reason why you can’t have more than one register for people buying lottery tickets.”

It costs $2 to play the game, but the odds of winning the jackpot are not very good, as the chance of matching all six numbers and taking home the grand prize is one in 302.5 million.

Mega Millions is played in 44 states as well as Washington, D.C., and the U.S. Virgin Islands. Nevada is not a lottery state.