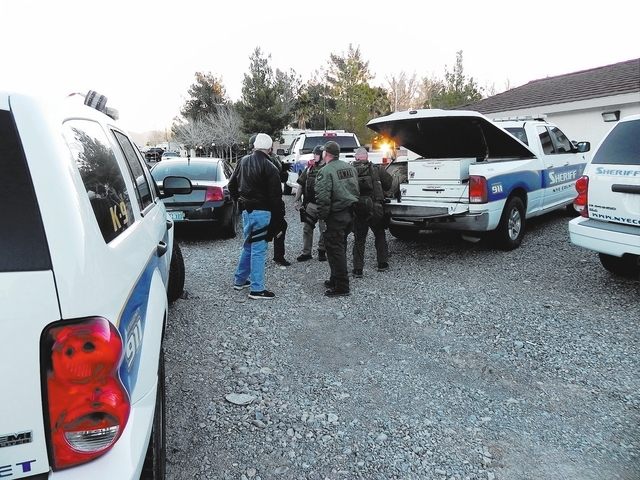 The Clark County Coroner’s Office on Monday identified a man who kidnapped a woman from Las Vegas, brought her to Pahrump and then killed himself as a Nye County Sheriff’s SWAT team was about to enter his barricaded hotel room.

Ferdinand Lariosa, 29, fired a single shot into his head from a Glock 22, .40 caliber pistol, Sunday morning after local authorities discovered him holed up in a first-floor room at the Best Western Pahrump Station, 1101 S. Hwy 160. He was holding a woman in her early 20s hostage. She was reportedly his former girlfriend.

Las Vegas Metro Police alerted local authorities at about 4:19 a.m. to Lariosa after witnesses told police the man confronted the female victim in Las Vegas, forcing her into her own car and then driving away.

A witness attempted to stop Lariosa, but was scared off when Lariosa fired his pistol into the air.

Metro tracked Lariosa to Pahrump via a cellular signal coming from a cell phone in the victim’s car.

A Nye County deputy was able to locate the victim’s car at the Best Western at about 5:40 a.m. and police organized a quick response. NCSO called out its SWAT team as well as a hostage negotiator.

Multiple phone calls from the sheriff’s hostage negotiator to the hotel room and the suspect’s cell phone went unanswered and Sheriff Tony DeMeo readied the SWAT team, according to a press statement on the matter.

“Due to the incident, being a hostage situation the NCSO SWAT team was cleared to make entry into the room for Hostage Rescue, as the entry was being made NCSO SWAT deputies heard a single shot fired,” the press release states.

The woman was later released to Las Vegas police investigators.

Police began evacuating the Best Western just before 7 a.m. Guests in rooms near the suspect’s were alerted by police to evacuate to a meeting space.

“I think in the history of the hotel, in 30 years, this is the first time something like this has ever happened,” she said.

Two calls placed to Lariosa’s relatives in Las Vegas were met with refusals to provide comment.

Police have not identified the female victim in this case.