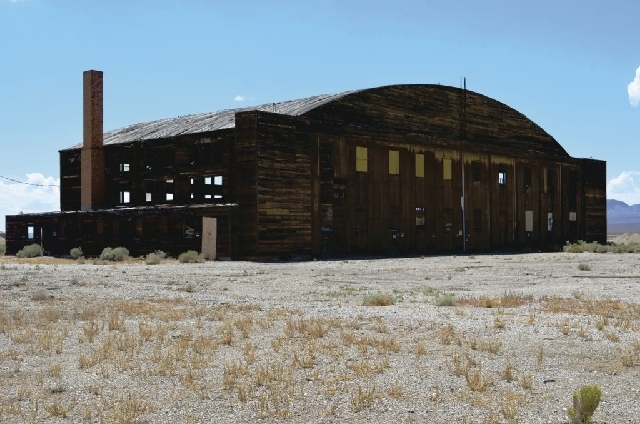 A man who claims he owns one of three hangars at Tonopah’s tiny airport will be in District Court Monday in an effort to keep Nye County from taking possession of the property.

James Prudden, 73, says he’s paid taxes on the hangar for 32 years and that in 2004 he filed an application for full title to the property with no response from county officials.

Yet, when he recently attempted to sell the hangar, county officials, through the district attorney’s office, informed Prudden that he never owned the 13,800 square foot building or the land where it sits at all; he merely leased it from the county.

His bid to sell it, then, forced the county to terminate whatever lease arrangement he had and to reclaim the hangar, officials say.

The hangar was built in 1943 and used for training pilots during World War II. It was transferred into the county’s possession by the federal government in 1949. The county owns the two other hangars at the airport, but they are in considerable disrepair.

“Mr. Prudden was given a long-term lease and he has been holding over since the termination of the lease. He believes his possession of the property constitutes adverse possession. Unfortunately, Mr. Prudden fails to understand you cannot adversely possess against the government and particularly since the county does not own the land at the Tonopah airport. The county cannot sell the land as the U.S. Air Force has the right to re-take the property at any time,” District Attorney Brian Kunzi commented via email when asked about the case.

Prudden says he can’t wait to get into court, calling the county’s position laughable.

“I’m really going to paste these characters on Monday morning. Nye County is a total fiasco. They keep bothering people with all this wrong information and all it does is keep people employed,” he told the Pahrump Valley Times this week.

Among the claims Prudden will make in court is that the hangar and land, legally known as Parcel T2430, was left off of the agreement between the federal government and Nye County in 1949.

Also, according to official maps and survey notes on the property, a number of mistakes have clouded the title even further.

“I’m a surveyor, and I understand surveyor’s notes. You’re gonna get a big giggle out of this one.,” he told a reporter. “The surveyor and I got together — by the way, the Nye County commissioners at one time invited me to be the county surveyor — so I understand surveying notes. The surveyor and I agree to the fact that the building is in the northwest corner of section seven (on official county property maps). The legal property description says the property is in the northeast corner of section seven. Well, that’s a half-a-mile away. This is a real fiasco … and I plotted the survey notes and the survey notes put the building in section eight, which is owned by the BLM.”

As if the situation wasn’t tangled enough, Prudden says that he may invoke an 1863 treaty between the United States and the Western Shoshone Indian nation. The Ruby Valley Treaty conveyed certain territories in Nevada, and other states, for use by the government, military and industry, including mining interests at the time. The treaty was signed by James W. Nye, for which the county is named; he was the state’s first territorial governor appointed by President Abraham Lincoln. Other signatories include 12 Western Shoshone chiefs and warriors.

The treaty has a long, long history of being contested. The U.S. government attempted to settle disagreements with the Western Shoshone — the Indians did not believe they were relinquishing ownership of the land under the treaty — as late as 1979, offering the tribe millions of dollars in payment. According to a Wikipedia page about the treaty, even as late as 1992, President Bill Clinton was weighing arguments that the treaty was invalid, that the U.S. government simply stole the land.

Prudden says if the land his hangar sits on is indeed on BLM land versus the property included in the county’s 1949 agreement with the Defense Department, then it might be subject to the Ruby Valley Treaty as well.

Asked what the treaty meant for the county’s case, Kunzi said its relevance was lost on him.

“The treaty was terminated in the 1970’s, but many Shoshone believe the treaty never resulted in a surrender of their lands. They believe the Shoshone Nation still has ownership of these lands, which covers much of central and eastern Nevada,” the district attorney said. “Mr. Prudden fails to articulate how his claim to title is perfected by the treaty. I do not believe he is a Native American and he certainly does not state he is a member of the Shoshone Nation or even if he was how he alone has ownership of the parcel at the Tonopah airport, possession of which was given to him through a lease with Nye County.”

Kunzi believes Prudden is simply trying to muddy the waters as much as possible. The man even filed a lien on the property against himself in order to fight the county’s effort.

“After the action was filed, he even recorded a lien on the property against himself as if this would stop our action. The problem is he has not even filed an answer to our complaint. If there were a rationale explanation for these arguments such are lost on me,” Kunzi said.

Prudden says he indeed did respond to the county’s complaint through letters to Judge Robert Lane and county commissioners. Lane responded that the information Prudden provided was “not a proper, legal motion as required by Nevada Rules of Civil Procedure.”

The longtime geologist and mining engineer says he was advised by Kunzi to hire an attorney. He told Lane as much in a letter dated July 20, that an attorney he consulted wanted $10,000 in advance for the case.

“This is another reason the district attorney wanted to force me into this situation. He advised me to hire an attorney, well that’s $20,000. Screw you Charlie Brown. I’m not going to pay one of your brethren $20,000 to represent me, I’ll represent myself,” Prudden said.

Prudden says he is in poor health, with mounting medical bills for a heart condition and after a two-year battle with cancer. He say he was planning to sell his building and land to pay some of his debts.

He added that he’s hosted a number of prospective buyers, all of whom eventually declined because, in his words, “they couldn’t do business with Nye County.” One buyer wanted the hangar to manufacture experimental parachutes. Another wanted to use it to house students for military-style security training. Today, Prudden says he rents the hangar to an airplane owner who uses it occasionally to store his plane. Prudden called the rental agreement an informal contract since he never received county approval to sublease the space.

Though he didn’t say as much in letters to Lane or to county commissioners, Prudden says he believes his putting the hangar up for sale gave county officials just the excuse they needed to do something they may have wanted to do for commercial reasons for a long time.

“The for sale sign is an excuse, a flat, simple, 100 percent excuse. It’s an excuse for takings. I pointed out to the commissioners that this was a takings, nothing else. I didn’t point any fingers at anybody of having any under the table commercial interests with respect to that building. But, I think the inference is there. Somebody is going to benefit from me losing that building,” he said.

Charles Watkins, a former deputy district attorney who initially filed the complaint against Prudden, says he never heard of any commercial interest in the property. He merely was assigned the task to clean up a muddied title.

Lorinda Wichman, the county commissioner whose district includes much of northern Nye County, says she is vaguely familiar with Prudden’s case but couldn’t offer much insight into the issue, save for saying it was all a title action long in the making.

“It’s a mess. Title out there has always been a problem,” she said.