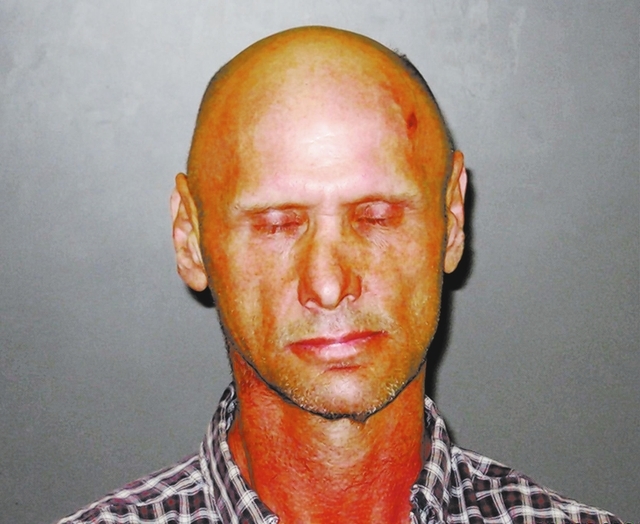 One man was taken into custody on a charge of impersonating a public officer this weekend after he allegedly told police he had smoked methamphetamine to keep his cover as an undercover cop.

Russell Troy Winterton, 50, was arrested on charges of possession of drug paraphernalia, attempted home invasion, impersonating a public officer and being under the influence of a controlled substance after Nye County Sheriff’s deputies were called to the 3200 block of Medicine Man Road Saturday afternoon.

According to an arrest report, around 5:30 p.m., a deputy was asked to respond to a report of an attempted home invasion in the area. The homeowner called police and explained she had been home alone when a male, later identified as Winterton, walked up to her front door, jiggled the door handle as though he was attempting to get in and then left, walking toward another residence down the street.

When deputies knocked on the door of the home the woman said she had seen Winterton walk toward, Winterton reportedly answered the door and said he lived there.

According to the declaration of arrest, when asked if he had been at his neighbor’s residence that day, Winterton allegedly explained he had been out looking for his mother and then stopped by the other address to ask to use the phone to call police because his friend had stolen several of his DVDs.

Winterton told police he did not attempt to enter his neighbor’s home, he just asked to use the phone.

Winterton then reportedly allowed deputies into his home, asking if they could take a look at the room where his DVDs had disappeared from.

While in Winterton’s bedroom, police allegedly saw drug paraphernalia in plain view, including a piece of burnt tin foil and part of a pen with burn marks on one end, which are commonly used to ingest narcotics. Winterton denied using the material to smoke drugs, however, telling police the only drugs he took were his prescribed medications.

Winterton, whom an arrest report notes was allegedly exhibiting signs of being under the influence of a controlled substance, was then placed under arrest.

He then reportedly asked if he agreed to take a drug test would deputies be willing to release him. When they said they would not, Winterton allegedly agreed to take the test anyway.

The test allegedly came back positive for THC, methamphetamine, amphetamines and benzos in the man’s system. Winterton then allegedly told police he had smoked meth that day because he was an undercover cop and he had to keep his cover. Police said he then claimed to work for a deputy in the sheriff’s department and told them if they spoke to him he would be able to clear the whole situation up.

Winterton was subsequently transported to the Nye County Detention Center to be booked into custody. As of Tuesday morning, the suspect was being held in lieu of $13,140 cash or bond.