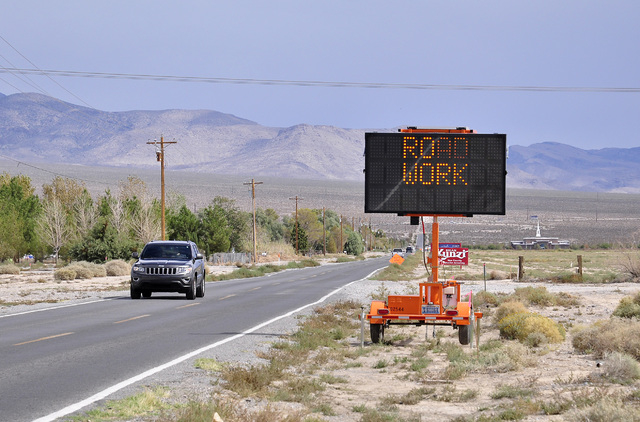 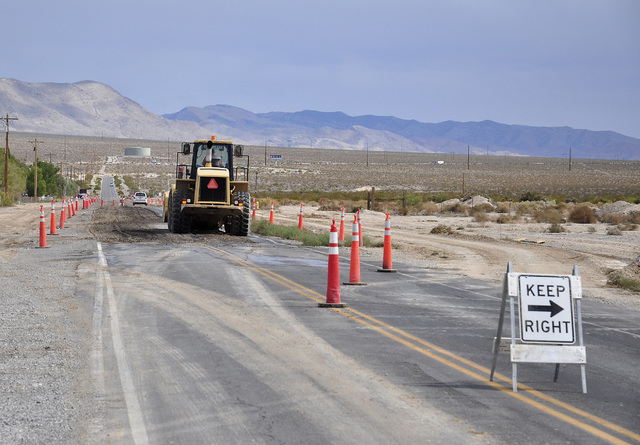 Work began this week on reconstructing a three-mile stretch of Manse Road between Homestead and Hafen Ranch roads. The project is expected to take three months.

Nye County Commission Chairman Dan Schinhofen has been pushing to start work on the project, reminding motorists there will be a 15 mph speed limit while work is underway.

“If you’re going that way expect delays, expect to be driving on gravel on the sides,” Schinhofen said.

Public Works Director Dave Fanning said the county is meeting with Adaven, a company owned by America West, which has plans for a Mountain Falls subdivision on the south side of Manse Road. Plans include road improvements of their own. Fanning said Adaven plans to let out their own contract to build curbs and gutters on the south side of Manse Road between Jane Avenue and Hafen Ranch Road.

Crews will have to cap an abandoned well that could possible delay the reconstruction process, Fanning told commissioners.

“We will be working on that project or the next quite a few months, three to four months at least. So we can pave that in the winter, that’s not a problem. Everybody, if you would please pay attention to what we’re doing down there, if you can afford to go around this, please do,” Fanning said.

The county will make every attempt to make sure people are not delayed, including school buses, Fanning said. Since it will be a couple of months before the county is ready to open bids on the repaving, motorists will be driving on gravel for some time.

“The vast majority of those funds are from impact fees, without impact fees this would not have been done,” Schinhofen told the Pahrump Valley Times

A machine referred to as an asphalt zipper will grind up the asphalt and reuse it for a base. The road will be widened from 12 feet to 19 feet for each lane, allowing a bike lane on each side, Fanning said.

On another matter, Schinhofen, who also sits on the Nye County Regional Transportation Commission, said he’d like to use money Nye County will have to spend for the cost of two roundabouts on Highway 372 for reconstructing Homestead Road instead.

On Sept. 2, county commissioners voted 3-2 to approve agreements with the Nevada Department of Transportation to construct roundabouts at Highway 372 intersections with Pahrump Valley Boulevard and Blagg Road. Nye County’s share of the cost would be $450,000 for each roundabout, NDOT would pay $1.8 million using Highway Safety Improvement Program funds from the Federal Highway Administration. Commissioners Frank Carbone and Donna Cox voted against the agreements, meaning Schinhofen would cast the pivotal vote reversing that decision.

Schinhofen said there’s issues getting right-of-way on Homestead Road between Manse Road and Jeane Avenue. But he said Homestead and Manse roads are probably the most traveled in the south end of the county.