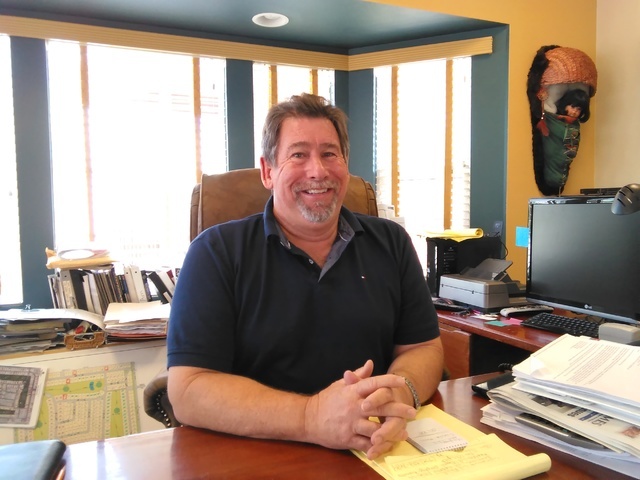 Factory Home Center owner Gerald Schulte has good reason to be gratified that his business at his 1361 S. Highway 160 location is still in good shape.

Out of roughly half a dozen dealers of manufactured home in the Pahrump Valley over the years, hes still doing business after the others fell by the wayside.

Im the only street dealer for manufactured homes in all of Southern Nevada, he said. Theres another dealer in Las Vegas who works out of a strip mall, but they dont have models. When people go there, they just look at the floor plans and buy from there.

Part of Schultes longevity is the fact that he owns his own transport and set-up companies, a crucial component in the manufactured home business when he opened his Pahrump business nearly 10 years ago.

I started in 2007 when all the other dealers started shutting down, he said. When I opened, I sold homes at true invoice just to get the set-up on it and make a couple thousand dollars just to keep me from laying off my employees.

An additional component Schulte said was the fact that bank financing for manufactured homes has been made easier in the past several years.

Previously, we could not get whats known as comps, which stand for comparisons, he said. With all of the fees, and a soils report, it prices them out to where they are not competing with the used homes that are on land that the banks are letting go for 16 or 17 cents on the dollar today. Most people that can meet the comparisons who happen to own the land free and clear, do a land-home package. I sell all over the state right now so I just dont rely on Pahrump.

Schulte also spoke about the soil where the homes are constructed around the valley.

He said it could cost thousands of dollars to mitigate the soil which will support structures.

Without the soil mitigation, the home will eventually begin to sink.

We have the worst soil in the state and we have to spend more money in dirt work with our houses here in Pahrump than we do anywhere else, he said. Its an average of seven to $25,000 just in dirt work underneath the home. With stick-built homes, they can spend a lot of money, but they still have a lot of settling out here and that home is labeled for the rest of its life. It has superficial cracks throughout the concrete slab.

Other benefits for manufactured home buyers versus so-called stick-built homes in Pahrump is the design.

These are built in a factory and it has to come down the highway and therefore it flexes and does all of that movement, he said. In Pahrump its ideal, because if it settles on our bad soil, it doesnt cost that much to relevel it and superficially adjust the belt around it to the foundation, which is a big advantage.

Many of the materials for manufactured homes at present, Schulte said, are now the same as those for traditional-styled homes in the valley.

For many years the dealers sold homes that should have went into trailer parks, because they didnt do patio covers or garages so basically it was a box on a lot, he said. Today, all of our homes are all residence material. You can go to Home Depot and buy anything you need for our manufactured homes.

With more than $1,000,000 in inventory at his location, Schulte said people can come by and actually tour several different model homes on site.

He noted that the other manufactured street dealers in the past could not survive the recession beginning in 2007.

Freedom Homes, which was located at Highway 160 and Commercial Street, for example, was owned by a large corporation and was losing money each month.

It cost them like $40,000 each month just to keep the doors open and if you are not selling a home thats a lot of money to put out in each month so they made the decision to pull the plug, he said.

Schulte said the peak for manufactured home dealers in Pahrump was back in 2005, where his set-up company alone installed upward of 400 to 500 homes just in Pahrump.

Back then, there was Fleetwood Homes, which got bought out became Freedom Homes, he said. There was Valley Homes, which had the Jolly Green Giant there. Where I am today, used to be Nationwide Homes and down the street there was Sun Valley Homes and Palm Harbor Homes. On Highway 372 we had Starboard Homes. Most of them were owned by big corporations and they were hemorrhaging a lot of money just to keep the doors open. Ive seen it all. Ive seen all the troubles that came with it and the good times as well.