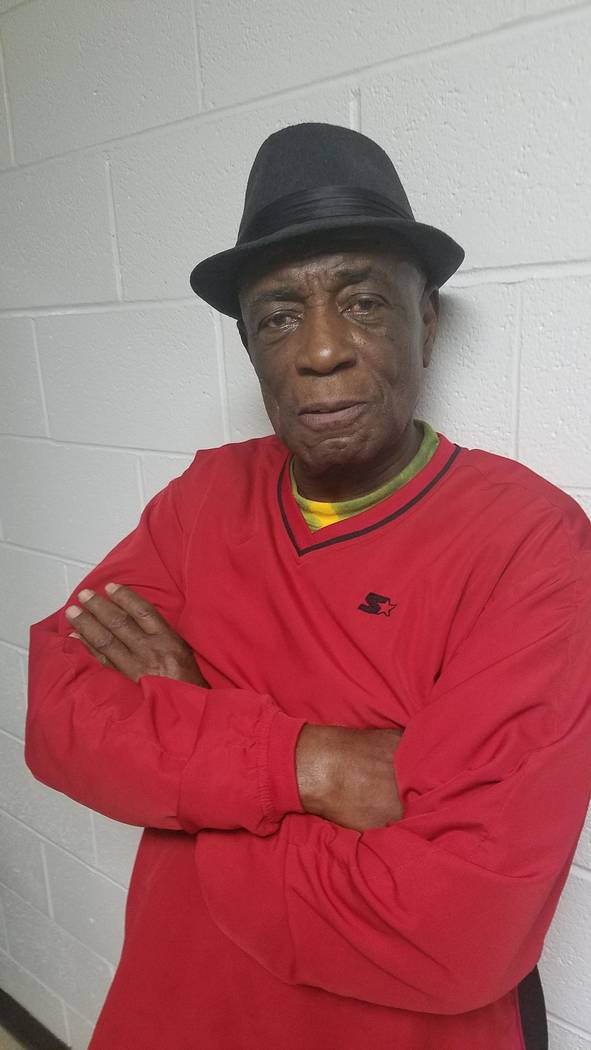 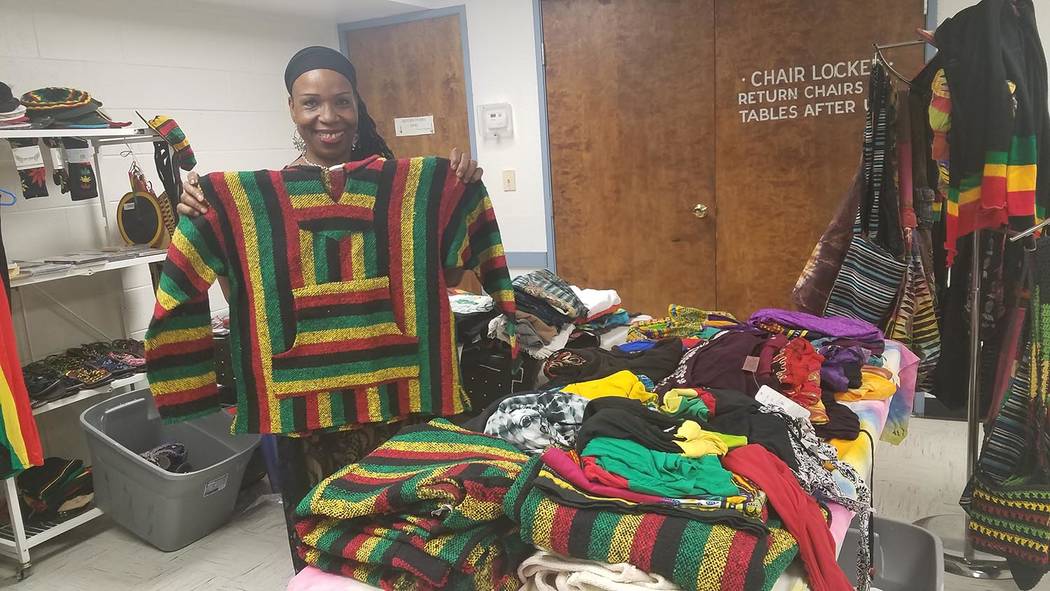 David Jacobs/Pahrump Valley Times Margo Tyrell displayed arts and crafts at the inaugural Caribbean Mardi Gras Carnival/Reggae Festival on March 25 in Pahrump. In addition to displaying the crafts and clothing, Tyrell teamed up on the specialty food. 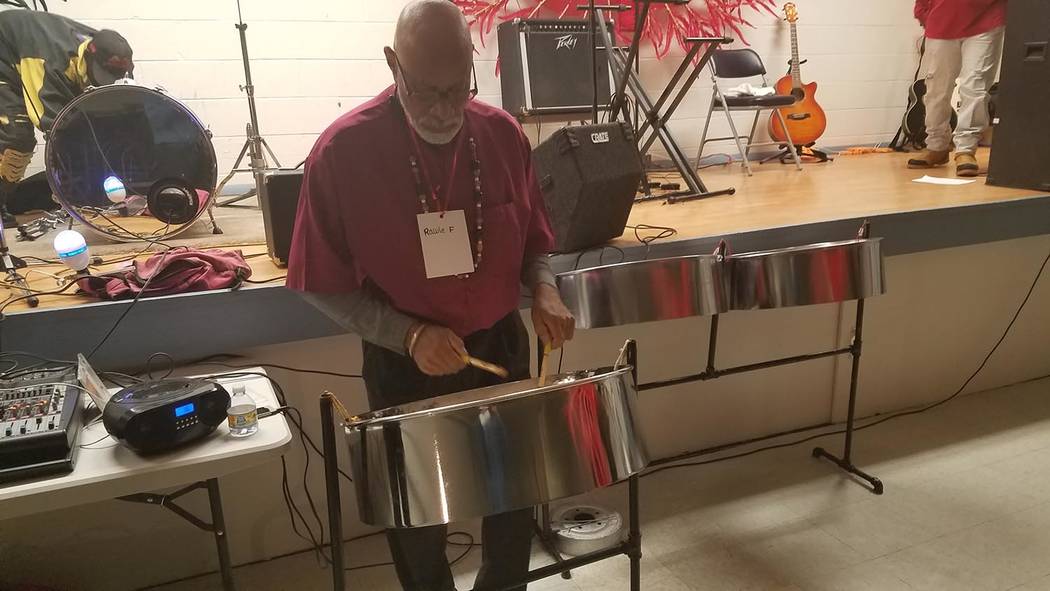 David Jacobs/Pahrump Valley Times Rawle Fraser of Phoenix visited Pahrump for the inaugural Caribbean Mardi Gras Carnival/Reggae Festival on March 25 in Pahrump. In this photo, he is seen playing steel drums. In addition to music and steel drum performances, the inaugural Caribbean Mardi Gras Carnival/Reggae Festival included special dancing, Caribbean food, clothing, jewelry, and arts and crafts — some handmade and from around the world. 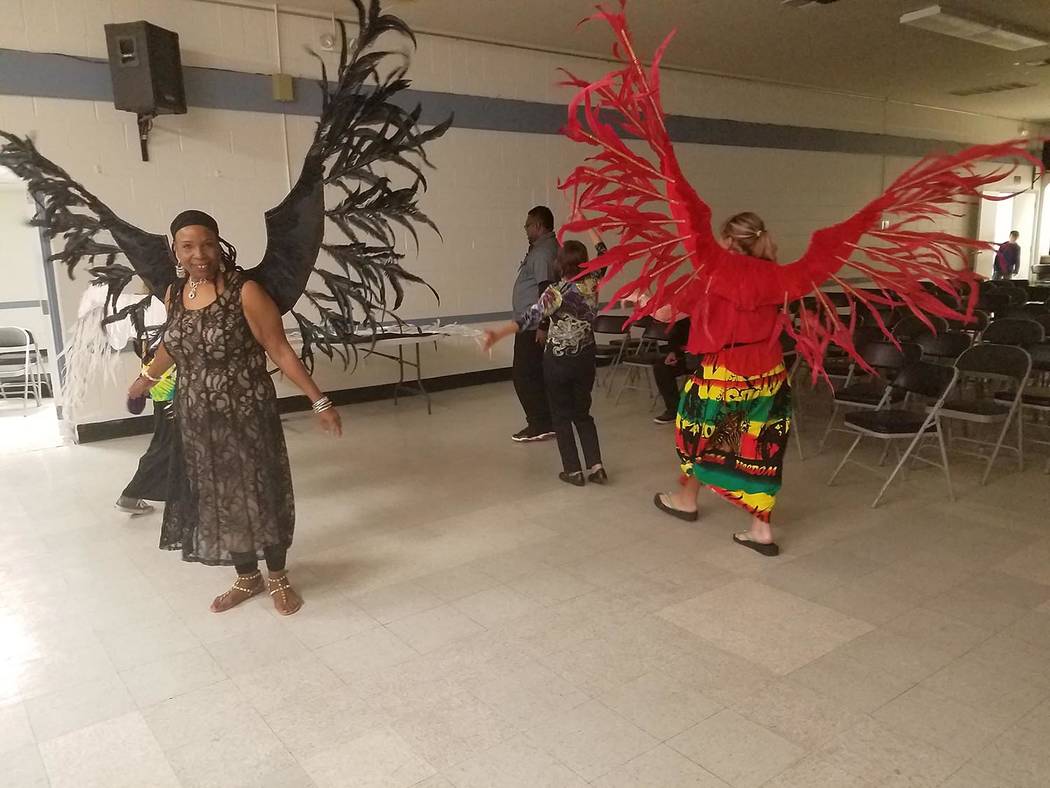 A year ago, Nye County celebrated Mardi Gras with festivities in Tonopah.

“We want to bring some new culture to Pahrump,” said Rankin-T, a reggae singer originally from Jamaica and a DJ in Las Vegas for the past 33 years.

“Reggae music is very strong music,” he said. “Everybody is looking to that music these days all over the world. Pahrump is getting a feel of it, and it is coming along real nice.”

As he prepared for the March 25 event at the Bob Ruud Community Center, Rankin-T described what people might be surprised to learn about reggae.

The music fits in with the theme “where the world is one,” he said.

“Everywhere I go, everybody cries for reggae,” said Rankin, who looked forward to introducing the region to steel drums and calypso” — a type of music introduced in the Caribbean.

In bringing the Mardi Gras Carnival/Reggae Festival to Nye County, Rankin mentioned the importance of Jamaican musician Bob Marley, who died in 1981.

Marley is described by biography.com as “a world ambassador for reggae music,” selling more than 20 million records.

“Bob Marley brought reggae music to the four corners of the earth,” Rankin said. “The whole world wants a piece of it. It’s very big here in America.”

“I live right here in Pahrump, and I’m trying to bring some culture to this town because they love it,” he said.

In addition to music and steel drum performances, the inaugural Caribbean Mardi Gras Carnival/Reggae Festival included special dancing, Caribbean food, clothing, jewelry, and arts and crafts — some handmade and from around the world.

Rawle Fraser of Phoenix visited Pahrump for the event.

“I make the costumes such as the angel wings that you see plus, I play steel drums,” he said. “I teach steel drums in schools.”

Fraser is friends with Rankin.

“I went to Los Angeles to do a launch of costumes for a Caribbean carnival, and on my way back planned on coming through (Pahrump) and just sharing the evening with him (Rankin),” Fraser said.

“This is a community here where there are not a lot of Caribbean people, and I felt it was good to just give them a bigger package of what he (Rankin) wanted to do,” Fraser said. “Not just the reggae, but a sampling of the steel drums, a sampling of the costumes. I am going to have five costumes, angel wings.”

“They can come out and have some fun with that,” Fraser said. “It is good that the opportunity is here to share it. I am really happy to be here and enjoy the cool weather rather than the hot in Phoenix and bring a broader package for the community, for those who are here.”

Margo Tyrell, married to Rankin for 30 years, displayed the arts and crafts.

“Some of them are handmade by us, and some of them are from around the world,” said Tyrell, a native of Barbados and a Pahrump resident since 1996. “We have Indian cottons. We have lots of handmade beads. I make the necklaces.”

In addition to displaying the crafts and clothing, Tyrell teamed up on the specialty food.

“Today, Stan cooked the Jamaican jerk chicken, and I made the rice and peas and the salads, all of the dressing,” Tyrell said. “All of the Caribbean dishes I made.”

She previewed the menu.

“We have Jamaican stir-fry. We have authentic rice and peas, a pea from the Caribbean. We have exotic salad. We also have Jamaican exotic fish. The fish is fried in grape-seed oil. It is then sauteed with onions and bell peppers and all the good flavorings we put into it to make it really nice.”