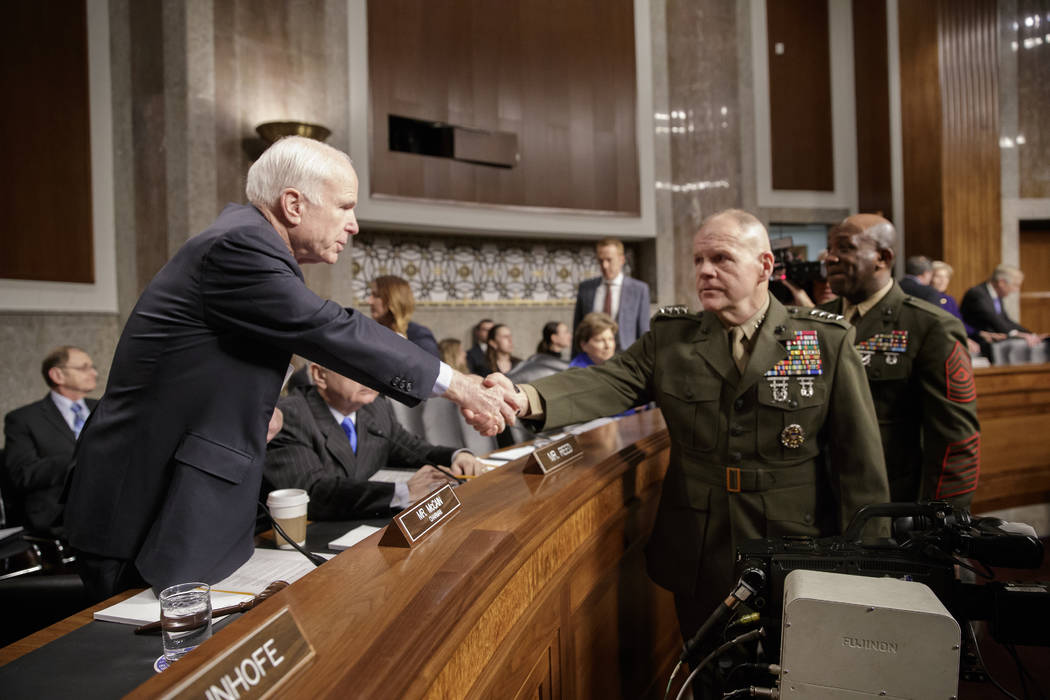 Senate Armed Services Committee Chairman Sen. John McCain, R-Ariz., left, welcomes Marine Corps Commandant Gen. Robert B. Neller, center, and Sgt. Major of the Marine Corps Ronald L. Green on Capitol Hill in Washington, Tuesday, March, 14, 2017, prior to the start of the committee's hearing on the investigation of nude photographs of female Marines and other women that were shared on the Facebook page "Marines United." (AP Photo/J. Scott

WASHINGTON — Declaring “enough is enough,” the top U.S. Marine on Tuesday told senators that he intends to fix the problem that led to current and former Corps members sharing nude photos of female Marines online and making lewd or threatening comments about them.

But angry and skeptical members of the Senate Armed Services Committee demanded more, saying the military hasn’t done enough to combat sexual assault and harassment despite years of complaints and problems. A House panel hearing on the issue next week will include representatives from all the military services.

Gen. Robert Neller, the Marine Corps commandant, vowed to hold Marines accountable through whatever legal and other means possible. He acknowledged the scandal may hurt female recruiting and that changes have to be made in the Marine Corps culture, where some male Marines don’t accept women in the ranks.

To some senators, his testimony rang hollow. He faced a particularly fierce barrage of questions and criticism from the women members of the panel.

“This committee has heard these kinds of statements before,” said Sen. Jeanne Shaheen, a New Hampshire Democrat.

“It’s hard to believe something is really going to be done,” she said. “Why should we believe it’s going to be different this time than it has in the past?”

Fellow Democratic Sen. Kirsten Gillibrand of New York said accusations of online exploitation of women by Marines came up in 2013, and victims have come forward.

“When you say to us it’s got to be different, that rings hollow,” Gillibrand said. “If we can’t crack Facebook, how are we supposed to be able to confront Russian aggression and cyber-hacking throughout our military? It is a serious problem when we have members of our military denigrating female Marines who will give their life for this country in the way they have with no response from leadership.”

So far, the Naval Criminal Investigative Service has launched the only official investigation into the Marine Corps online photo matter. The Army, Navy and Air Force have said they are looking into it, but victims had not yet come forward. The House Armed Services Subcommittee on Military Personnel will summon the services March 21 to discuss their social media policies and possible changes.

Neller and the acting Navy secretary, Sean Stackley, said that while some women victims have come forward, they need more to do so.

Stackley said an NCIS tip line has received more than 50 calls, and officials are finding and investigating more websites.

“This is a bell-ringer,” said Stackley. “We’re not going to go backwards.”

Neller said the Marine Corps must improve at the leadership level, communicating appropriate behavior and stressing that Marines shouldn’t allow these things to happen and not report them.

He had a message for male Marines.

“I need you to ask yourselves, how much more do the females of our Corps have to do to be accepted?” Neller said, naming several female Marines who were killed in combat in Iraq. “What is it going to take for you to accept these Marines as Marines? I’m committed to making this right and I need all Marines equally committed. We all have to commit to getting rid of this perversion to our culture. Enough is enough.”

He urged anyone who has been victimized or knows anything about the problem to inform commanders, a chaplain or a legal advocate.

Senators said the Marine Corps remains hampered by the divisive debate in 2015 over allowing women to serve in all combat jobs. It was the only military service to ask that women be excluded from competing for certain frontline combat jobs, arguing that studies showed mixed-gender units were less capable.

Then-Defense Secretary Ash Carter rejected the request. Women now are not barred from any combat jobs if they meet qualifications.

Stackley and Neller also noted the legal hurdles that make it more difficult to prosecute some online behavior that may be protected by privacy laws or as free speech. Questions remain, they said, about what can be done if someone voluntarily provides a nude photo or posts one online.

Lawmakers suggested possibly beefing up laws or regulations to specifically make what is called “revenge pornography” illegal under the Uniform Code of Military Justice.

Neller also said that while regulations can prohibit Marines from visiting certain places — such as strip clubs or other such locales — there are no similar restrictions on websites.