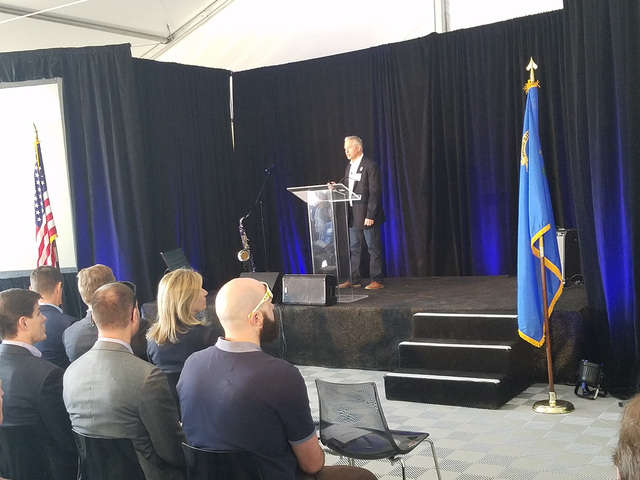 Kevin B. Smith, CEO of SolarReserve, speaks to the crowd at the company's Crescent Dunes solar plant on Oct. 11 in Tonopah. He announced plans for another solar plant in Nye County featuring 10 towers, valued at about $5 billion and projected to employ 3,000 construction workers. David Jacobs/Pahrump Valley Times 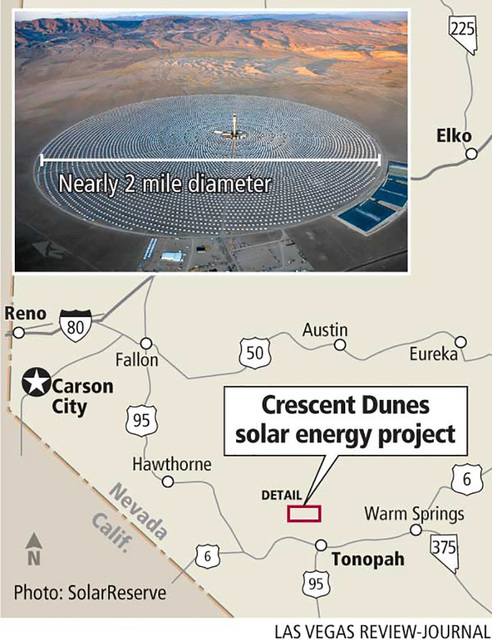 Massive solar project valued at $5B, with 3k jobs planned in Nye County

TONOPAH — Celebrating SolarReserve’s solar plant near Tonopah, the company’s leader announced plans Tuesday to build a second solar plant in Nye County, one featuring 10 towers projected to create about 3,000 construction jobs through a five-to-seven-year project valued at more than $5 billion.

“We have a couple of areas that we’ve outlined for project location,” SolarReserve Chief Executive Officer Kevin B. Smith told a crowd at the single-tower Crescent Dunes solar plant northwest of Tonopah. “We’re in the early stages of permitting and looking at transmission issues in regard to building a 10-tower project.”

In an interview later with the Times-Bonanza, Smith declined to pinpoint where in Nye County the 10-tower project would be built, citing “competitive reasons.”

“It’s not necessarily going to be adjacent to here,” he said, referring to Crescent Dunes off Gabbs Pole Line Road. “We have two sites that we’ve identified in Nye County. We’re looking at optimizing which is a better location, tranmission…”

Smith said the 10-tower project would be on land in excess of about 10,000 acres, likely U.S. Bureau of Land Management property, an arrangement that would be similar to the Crescent Dunes project.

Asked about a time frame for a project start, Smith said, “We’ve got at least a couple years more of development so we wouldn’t start to look at construction for probably at least two to three years.”

“Then we would do it in phases so you would build one (tower) at a time, or maybe it’s two or three (towers) at a time,” he said. “It’s going to be in excess of $5 billion in investments.”

“This was close to $1 billion here (Crescent Dunes),” he said. “The next towers are going to be quite a bit less expensive because of everything we learned here. We get can generate the same amount of electricity cheaper, but it will be a $5 billion project.”

The projected 3,000 construction jobs for the 10 towers compares with about 1,000 jobs for the one-tower Crescent Dunes project, said Smith of Santa Monica, California-based SolarReserve.

Once complete, the 10-tower site would employ about 250 workers, Smith said, compared with about 40 full-time employees at the Crescent Dunes solar plant that went into full operation this past winter.

As for financing the 10-tower project, Smith said, “We’re expecting that it will be commercially financed.”

“We may see that there’s programs at the (U.S.) Department of Energy that we can take advantage of, but likely we’re looking at conventional commercial financing,” he said.

The new project will feature U.S. technology, he added in the interview on the sidelines of SolarReserve’s Celebrating American Innovation/Celebration of U.S. Clean Technology Advancement” event.

“Some of you might say, ‘Oh my gosh, 10 towers. How much land will that take? Won’t that dominate the landscape of Nevada?’”

“This 10-tower project, which would be 10 times the size of this (Crescent Dunes), will take about 2/100 of one percent of the land in Nevada,” Smith said. “So it’s a speck in the Nevada landscape.”

“That is a lot of megawatts for Nevada, but in reality we’re targeting the California markets,” Smith said.

“So what they need is storage technology,” Smith said. “So we believe that building a large project here in Nevada — providing some of the power here locally and then exporting this as a product just like you export automobile parts or jet engines or gym shoes — we think this is a great export market for Nevada.”

Smith said that the 10-tower solar project likely would be built in phases over the five-to-seven-year timeline.

“Once we get into operation, about 250 operational jobs. More than $100 million a year would be spent on O and M (operations and maintenance) activities and about $600 million in total taxes over the first 15-to-20 years of operations,” Smith said.

Earlier, he described the Tonopah area’s Crescent Dunes solar plant as the No. 1 energy storage facility in the world.

Part of SolarReserve’s next stage is to “prove to the world that this technology works,” Smith said.

“I know that we have some fantastic partners in northern Nye County, and there is light at the end of the tunnel for our woes, things that we’ve had trouble with, our economy,” Wichman said in an interview. “This is a good thing.”

“I’m in, 100 percent,” Heller said. “What he’s (Smith) doing, it sounds great. Ten times the size of what we have here. It’s more of an opportunity to actually be a leader here in the state of Nevada.

“I’ll tell you,” Heller said. “Tonopah, the county of Nye, are sure setting a good example for everybody else. Let’s make it happen.”