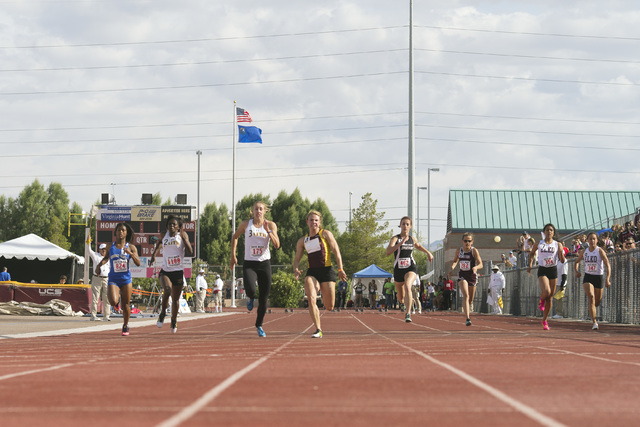 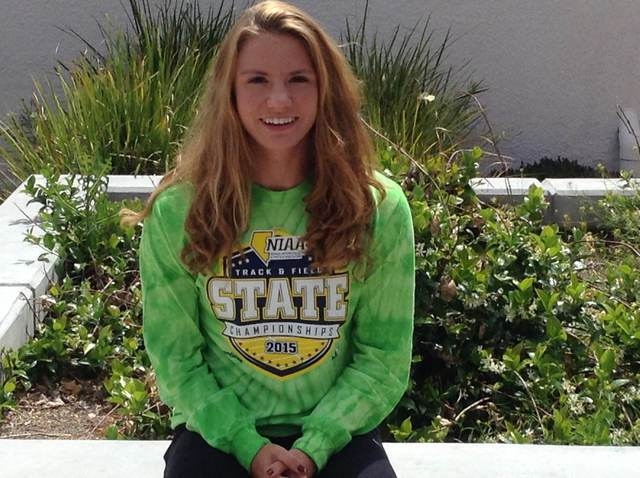 “I had to go to the bathroom and then they called all the people for the race while I was gone and I almost didn’t get to run,” she said. “Honestly I thought I would get last place because I had to rush back.”

Middleton made it back to the starting line, then defeated a pair of former state champions in the 100-meter dash to capture the Division I-A state championship in a wind-aided time of 11.76 seconds. Last year’s state champion Cayla Nikodemus, and 2013 champions Clarissa Maxey, both of Faith Lutheran, tied for second at 11.86.

Middleton, the only Pahrump Valley state champion in track and field this year, said the key to her success was being relaxed up until the race.

“I had to clear my mind and also catch my breath,” she said. “I wanted to get out of the blocks fast.”

She got a great start and never even looked at the other runners.

Ed Kirkwood, Trojans athletic director and last year’s head track coach, watched the race and said it about a body length between first and second.

“By 100 meter standards they weren’t even close,” he said.

Middleton said at the beginning of the year she never thought she would be state champion, especially after she lost to Nikodemus and Maxey in an early meet.

“It wasn’t till the middle of the year that I realized I could beat them,” Middleton said. “Once I got really close to beating them that changed things. Then I beat Cayla (Nikodemus) in the 200 at the Las Vegas Classic and I realized I could do it.”

Middleton said she had the key to beat these girls all along.

“At regionals I knew I could beat them because I get out of the blocks faster and all I had to do was to just keep running as fast as I could,” she said. “Before I would just let them pass me.”

Kirkwood said it was Middleton’s decison to train harder that made her the best.

“She decided to transform herself this year into a champion,” Kirkwood said. “She told me she wanted to get out of the blocks faster and get stronger and she did both. In addition to that, she sought out extra coaching in her sophomore year through Randall Cunningham’s club track team in Las Vegas.

“This year she was much quicker,” Kirkwood said. “She was not the same kid. She was the fastest out of the blocks this year and in the 100, that’s everything.”

Middleton is the fastest girls sprinter in the last five years to attend the high school and now one of the fastest sprinters in Nevada. Middleton is now the ranked 24th in the nation and getting phone calls from colleges.

Although her time was faster than Dominique Maloy’s at state, a 2008 Pahrump Valley graduate and holder of the 100-meter record at 11.89, Middleton didn’t break the record because her time was wind aided.

The state champion said she has not made up her mind where she wants to go to college. Kirkwood said she should have a lot of options in the next few days.

“There are still those colleges that try to scoop up an unsigned state champion who has not been signed,” he said. “She has gotten calls from a couple of schools in California, Oregon, and Louisana, but she is looking for something near Oklahoma.”

Middleton grew up in Oklahoma until eighth grade, when she moved to Pahrump and she said that is where she considers home. In the end she is happy that she accomplished her goal of taking state.