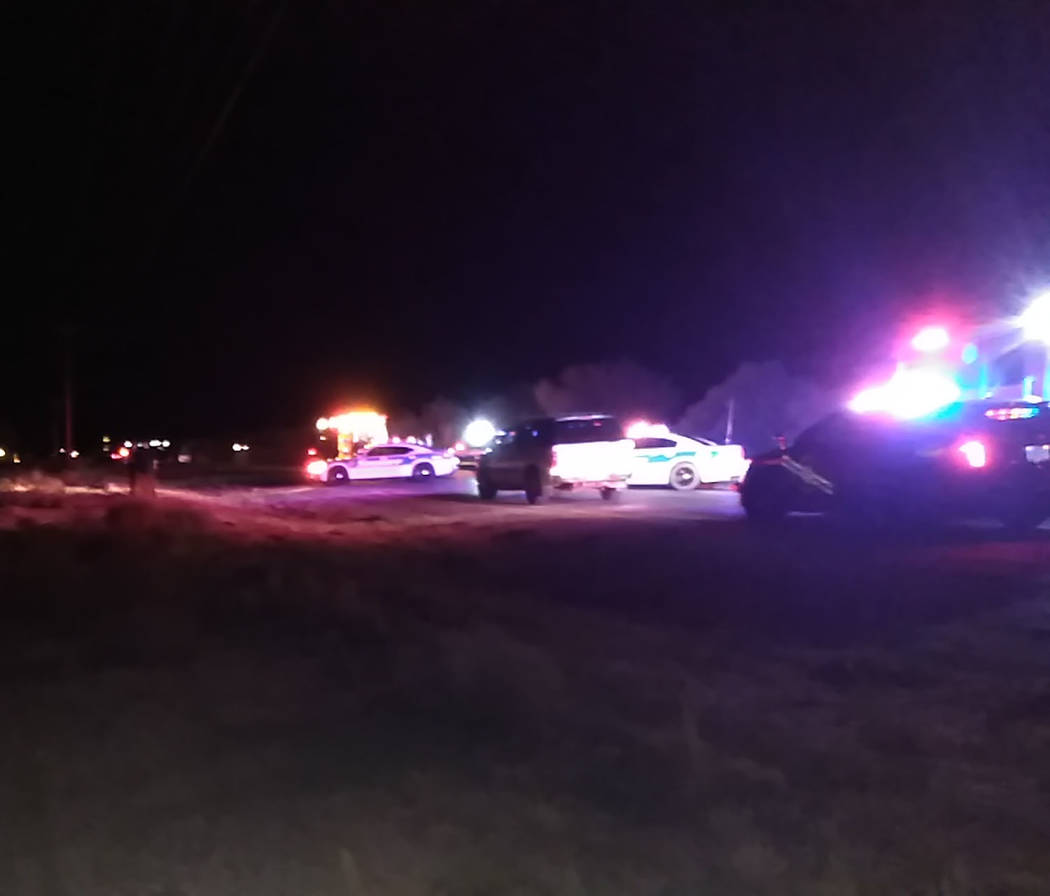 Selwyn Harris/Pahrump Valley Times Emergency crews from Pahrump Valley Fire and Rescue Station One located at Squaw Valley and Kellogg Roads were on scene just minutes after the fatal collision occurred. Fire Chief Scott Lewis said Mercy Air was added to the assignment, but was later canceled due the extent of the victims injuries. 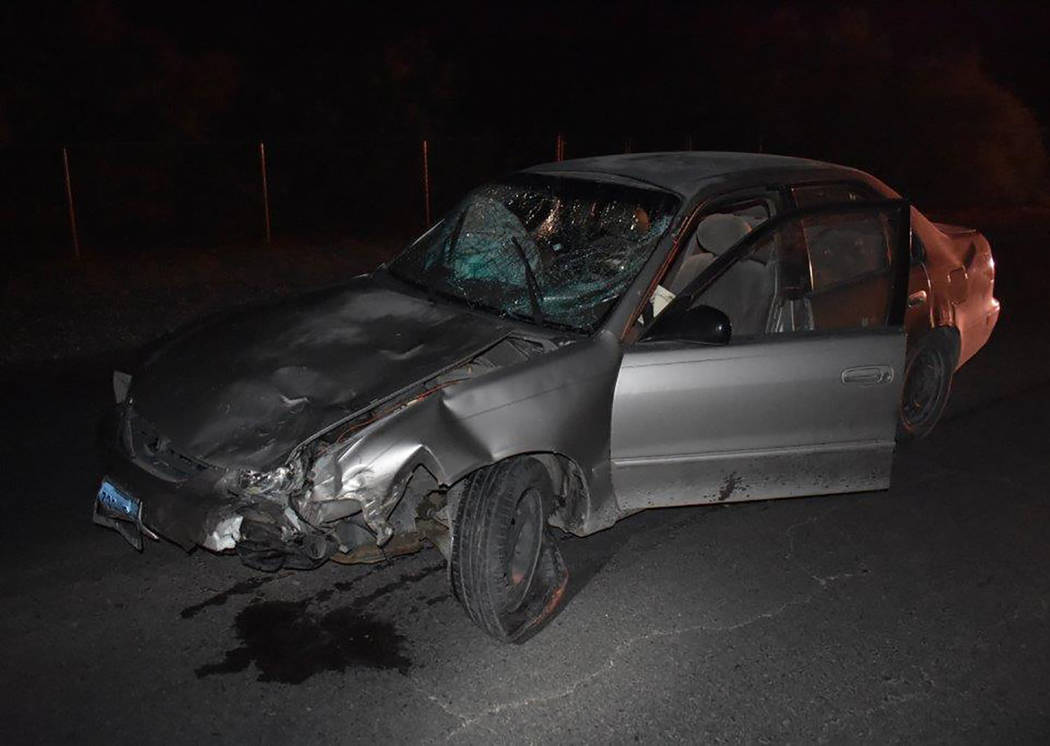 Special to the Pahrump Valley Times A minibike rider died following a collision with this vehicle early Saturday evening. The unidentified male victim was traveling along Kellogg Road between Quarter Horse Avenue and Squaw Valley Road just after 8 p.m., at the time of the crash. 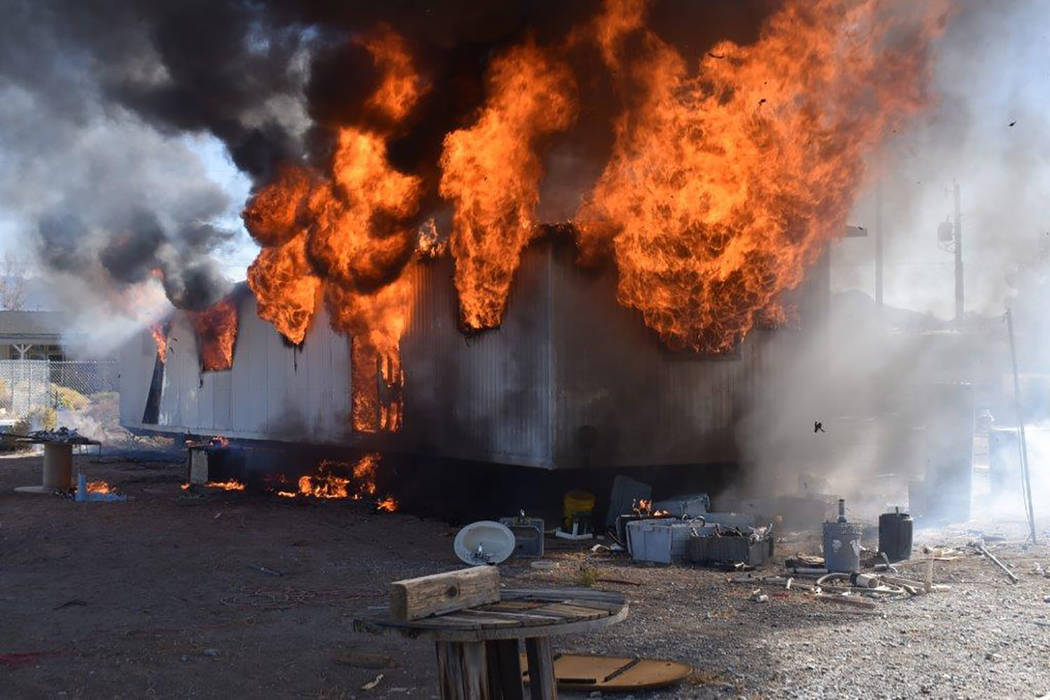 Special to the Pahrump Valley Times Local emergency crews were dispatched to a structure fire along the 1700 block of West Donner, just after 4 p.m., on Friday September 7. While no injuries were reported, Fire Chief Scott Lewis said the exact cause of the fire is under investigation as it was determined suspicious in nature. Additionally, Lewis said the structure was unoccupied and vacant at the time.

A minibike rider is dead following a collision with a vehicle on Kellogg Road on Saturday evening.

“We were dispatched for a motor vehicle accident in the area of Kellogg Road between Quarter Horse Avenue and Squaw Valley Road,” Lewis said. “Crews responded and found a serious accident involving the rider of a minibike and a passenger vehicle. Crews performed life-saving measures on the scene, however, the patient did not survive the injuries sustained in the accident and was pronounced dead at the scene.”

Additionally, Lewis noted that the collision occurred near the fire department’s Station 3 on Kellogg Road.

“There was no delay in the response at all,” he said. “The crew was initially dispatched, and we had placed Mercy Air on the assignment when we first arrived on-scene, however, Mercy Air was canceled due to the extent of the rider’s injuries.”

The Nye County Sheriff’s Office has yet to release the identity of the male victim, or the exact cause of the deadly collision.

One day prior, local emergency crews were dispatched to a structure fire on the 1700 block of West Donner Street, just after 4 p.m.

“Upon arriving on location, crews found a well-involved single-wide manufactured dwelling at the rear of the property,” Lewis said.

“There were numerous exposures, including additional structures, accessory outbuildings and an overabundance of personal property stored on that property. Crews mounted a defensive exterior attack, which knocked down the main body of the fire without incident.”

Lewis went on to note that the exact cause of the fire is under investigation as it was determined suspicious in nature.

“There were no injuries reported, and it was also deemed an unsecured, vacant structure,” Lewis said.

Fire crews remained busy throughout the weekend as Lewis said they responded to additional motor vehicle collisions throughout town.

On Sept. 5, first responders were summoned to the area of Lola Lane and Simkins Street to treat an individual involved in a pursuit with Nye County Sheriff’s deputies, where the rider of a quad collided with a deputy’s marked patrol vehicle.

“At 7:10 p.m. we were dispatched to the area of Lola Lane and Simkins Street for an injury motor vehicle accident,” Lewis said.

“Upon arrival, crews completed a patient assessment and determined that the mechanism warranted trauma criteria. That patient was flown to UMC Trauma in Las Vegas by Mercy Air.”

Roughly an hour later, emergency crews responded to the area of Highway 160 and Harris Farm Road for a vehicle collision involving an individual walking along the highway just after 8 p.m. “Upon arrival, crews found a bus versus pedestrian collision where that patient was found sitting on the side of the roadway,” Lewis said. “That patient was assessed and transported to the local hospital. The patient actually met Mercy Air flight criteria, however, they declined air transport.”

Less than 12 hours later first responders were dispatched for a two-vehicle crash at the intersection of Basin Avenue and Highway 160 at approximately 7:18 a.m.

“Upon arrival, crews found the two-vehicle accident as reported,” Lewis said. “It was a moderate impact collision where two patients were assessed. One patient had some complaints of soreness, however, they declined medical transport to the local hospital.”