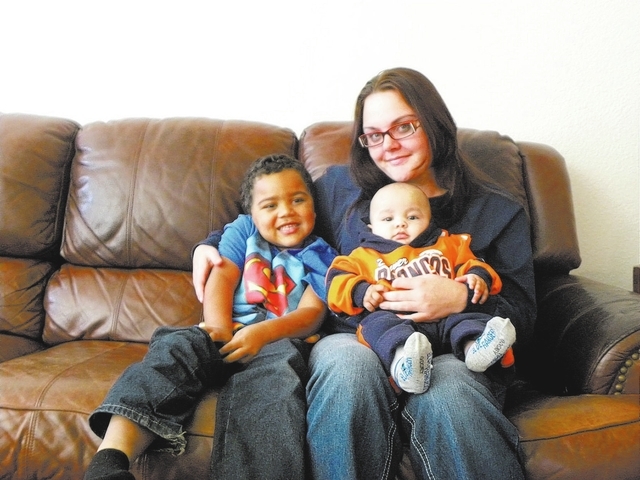 Although he is all smiles and full of energy today, one five-month-old little boy’s outward appearance belies the trauma he recently suffered after his mother’s then-boyfriend left him unattended next to a hot iron.

Christian Lucas has undergone two surgeries, weeks of intensive care in a burn unit at a Las Vegas hospital and countless days away from his Pahrump home as he recovers from third-degree burns he suffered after police say John Henry Cooper III, 37, his mother’s now ex-boyfriend, left the child alone next to a hot iron and then failed to get the boy medical attention for close to eight hours after he had been burned late last month.

Crystal Lucas, the baby’s mother, said what haunts her the most about the incident is the fact that she trusted Cooper with her son’s safety and that he hid the injury from her instead of taking her baby to the hospital.

“It doesn’t matter if you’re high as a kite or whatever, call 911. How dare you deny him medical attention like that,” she said.

Cooper recently accepted a plea deal to a felony charge of child abuse and neglect in the local Pahrump Justice Court, and is scheduled to appear in District Court to be arraigned on the charge on Nov. 15.

Crystal said while Cooper could face upwards of 10 years for the offense, it doesn’t change what happened to her son.

“I grabbed him to pick him up and he just started freaking out. I’ve never heard him scream like that in my life. And then I didn’t even see the burns on his leg, I just freaked out and called 911. I found out at the hospital. That made me really mad,” she recalled. “It was a third-degree burn. It had actually passed all of his skin and was into his tissues, it was bad … He’s already had two surgeries on it. I’m just thankful he didn’t die, he could have died. The doctor said it was good that I found it when I did, or else it could have become infected, it was almost to the point of being infected.”

Due to the severity of those burns, Crystal said Christian’s doctors are worried he may never regain full use of his arm.

“They said he may have restricted access of this arm forever because of the tendons shrinking,” she explained. “He keeps his arm up like it’s in a cast, he barely moves it. But he’s been in good spirits throughout everything. It’s crazy he’s so strong and he’s pushed through it. He’s been happy the whole time, even when we were in the hospital and throughout everything. Thank God he won’t remember this.”

While Christian recovers from this horrific incident, Crystal said her family is now faced with a new set of obstacles in their way to getting the infant boy better.

The mother of two has had to stop working to stay home and provide 24-hour care to her son, and without a paycheck coming in she doesn’t know how she can afford to continue taking the baby to Las Vegas for treatment or even how she is going to pay her rent to keep a roof over the family’s heads.

“He was there almost a month. I haven’t been able to work or anything. And still can’t because we have to go back and forth to Vegas and I just can’t chance it,” she said. “I’m in a rut right now. I was depending on (Cooper) because he had a job too and he was helping with the bills and babysitting. Now I don’t know what to do.”

Crystal said in addition to mounting hospital bills, Christian had grown out of many of his clothes since his first trip to the hospital and now she has to choose whether to buy him new clothes, or have gas money to get to Vegas and money to put food on the table.

“He’s growing up in the hospital. It’s sad. He has two shirts and this outfit left. I have to keep washing them. I could go buy him an outfit, but then I wouldn’t have gas,” she said.

Although Crystal says she is usually the one trying to help those around her, she realizes it’s now her turn to ask the community for help.

“We’re just asking for prayers for a quick recovery. If someone can help us, I will pay it forward. I’m usually the one trying to help others so it’s odd to be in the position where now I am the one asking for help,” she said.

The family is accepting donations in the form of clothes, baby supplies, gift cards to gas stations or local grocery stores and checks as they continue to get Christian the medical attention he needs.

“We just want him to have a normal life and to be comfortable,” said the boy’s grandmother, who didn’t wish to be named.

For those wishing to help the young family donations can be sent to the Hope for Christian Fund, P.O. Box 214, Pahrump, NV 89041, or dropped off at the Central Valley Baptist Church located at 3170 S. Blagg Road.