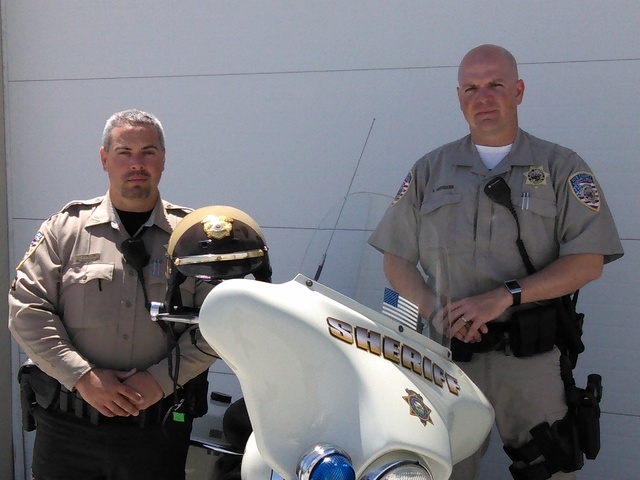 Officials with the Nye County Sheriff’s Office have announced the return of motorcycle patrols in the Pahrump community.

Nye County Sheriff Sharon Wehrly said both deputies will patrol the streets of Nye County with an emphasis on enforcement, engineering and education.

“We are excited to welcome back the Nye County Sheriff’s Office Motors Division,” she said. “We had motorcycle patrols here many years ago. When we took over, there were two motorcycles left; there was one BMW and one Harley Davidson and they have just been sitting there in disrepair.”

Undersheriff Brent Moody said the main emphasis for the deputies is education and public safety, especially near schools within the community.

He noted too many people have been killed in motor vehicle collisions along highways and local streets.

“Street deputies are incredibly busy and they handle traffic issues generally as a fill-in to calls,” he said. “With the motorcycle detail they will be committed to traffic and traffic accident investigations and schools which will be their primary assignment.”

Earlier this year, the sheriff’s office top brass solicited deputies to gauge any interest in transitioning to motorcycle patrol if the program were to resume.

Curtin and Hoffmann responded and ended up spending a month training in the course, performing quite well among the metro officers according to Moody.

“They had to take a two-day test to even be accepted into the program,” he said. “I did a lot of research into the Las Vegas Metropolitan Motor School and they are one of the most prestigious in the country with a very high safety record. These two individuals were sent to metro’s class and they met metro’s standards all the way through and I thought that the class was an absolutely fantastic class.”

Curtin, a nine-year veteran of the sheriff’s office spoke to the challenges he and Hoffmann faced during the course.

“I would say it was the toughest law enforcement class of all I have ever taken,” he said. “We did a little research and found that the consensus was the course was one of the hardest training classes around. I’ve been riding motorcycles for 20 years and I came out of it with more tools and more knowledge on operating motorcycles.”

The deputies will patrol the streets on 1450 cc V-Twin Harley Davidsons.

Hoffmann, a three-year veteran, said even with no air conditioning, he’s confident the extreme summer temperatures will not be a severe problem come July and August.

“The way the school explained it, we typically take a couple of jugs of frozen water and put them in our saddlebags,” he said. “They told us a good motor cop can find shade anywhere, that was a motto from the metro guys. The nice thing about a motorcycle vs. a car is that I can find shade from a light pole but they can’t.”

With Pahrump being a rural town, Hoffmann also said he and Curtin learned the importance of maneuvering a large street bike along non-paved roads, if necessary.

“The school trained us how to operate this motorcycle on gravel roads, riding both up and down gravel hills and even locking your brakes up when coming to a stop on the motorcycle in the gravel,” he said. “The first two weeks of motor school involved a lot of slow speed maneuvering, they teach you good clutch and throttle control where you can make a u-turn in a pretty tight spot.

As an added bonus, Wehrly said Nye County was not required to pay for the training.

“Metro sponsored it, so the class was free and they even let us use their motorcycles for training,” she said. “We are planning to bring more deputies into the motorcycle patrol units. We will also see a modest savings in fuel for the motorcycle units.”