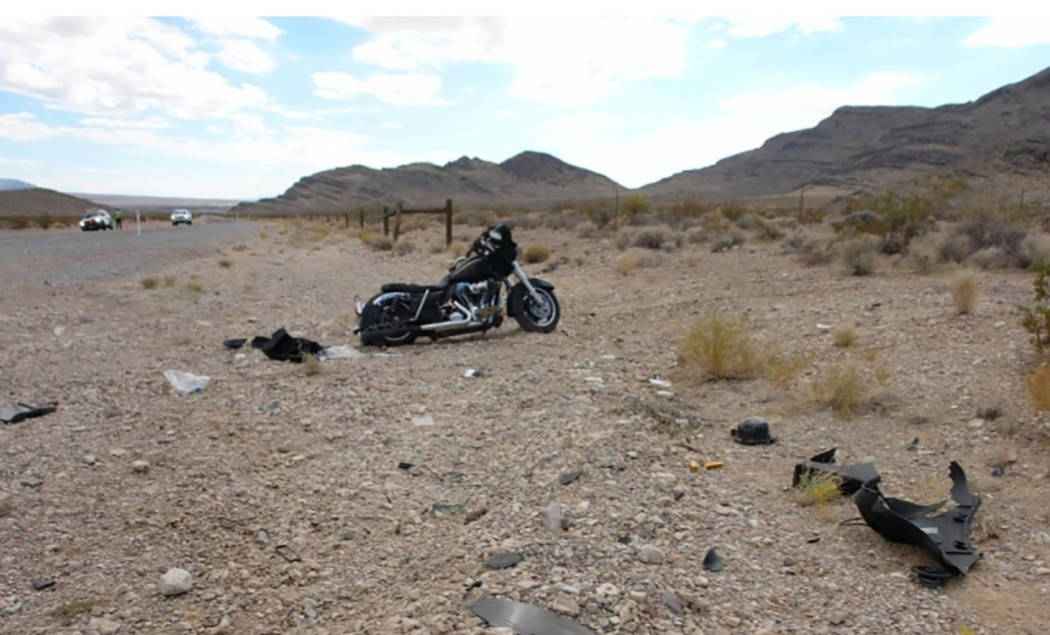 Special to the Pahrump Valley Times Nevada Highway Patrol is investigating a motorcycle crash along Highway 160 near mile marker 22 in Nye County on Saturday Oct. 20. An unidentified adult male rider was thrown from the bike after losing control and running into a ditch on the right shoulder of the highway just after 11 a.m. The crash marks the Nevada Highway Patrol Southern Command’s 53rd fatal crash resulting in 65 fatalities, so far, for 2018.

The Nevada Highway Patrol is investigating the death of a motorcyclist killed in a crash along Highway 160, late Saturday morning Oct. 20.

The preliminary investigation, according to an NHP news release, stated the male adult riding a black Harley Davidson, was traveling southbound on the highway, approaching Nye County Mile Marker 22, north of the Tecopa turnoff when the rider drove off of the right side of the highway and entered into a ditch at approximately 11:15 a.m.

As a result, the rider was thrown from the motorcycle.

“The lone adult male rider was transported to Desert View Hospital in Pahrump where he succumbed to injuries sustained in the crash,” the news release stated. “The identity of the adult male rider of the Harley Davidson motorcycle is pending next of kin notification. This marks the Nevada Highway Patrol Southern Command’s 53rd fatal crash resulting in 65 fatalities for 2018.”