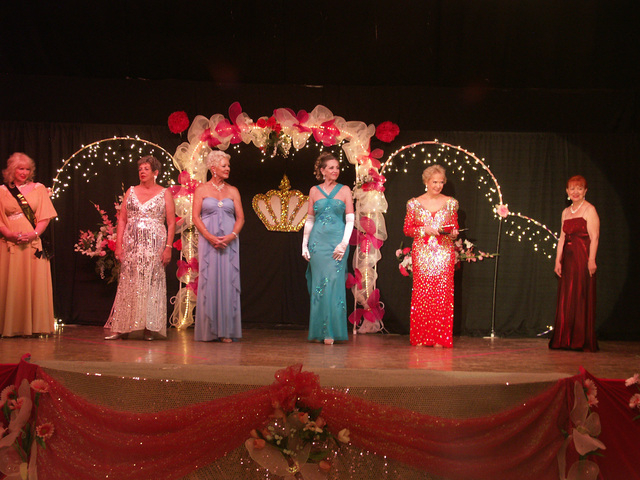 The Ms. Senior Golden Years Pageant has crowned a new queen, and it is a familiar name to Pahrump residents.

Laurayne Murray was the runaway winner on Saturday as she earned no less than four awards prior to being named the pageant’s overall winner.

Murray, a 14-year resident and former Pahrump Town Board chairperson, was one of six contestants in the pageant.

She’s been active in the community by volunteering with several different organizations benefitting seniors, children and everything in between.

“This was very shocking,” she said. “I’m very delighted for all of the ladies. The beauty and the talent and the platforms are world class. I was totally surprised and really, really happy to be able to take another path to being an ambassador.”

For her talent routine, Murray’s performance included a lip-syncing rendition of the hit song “If I Could Turn Back Time” by Cher.

Brenda Purcio, who earned first runner-up was additionally recognized for her Billy-line dance performance during the talent portion of the pageant, while second runner-up accolades went to Patti Perez.

Pageant President and Executive Director B.J. Hetrick-Irwin said the 12th annual pageant had one of the best lineups of contestants she’s seen.

“They are the fabulous six and they just looked like pros up there,” she said. “It could not have went any better. I was just thrilled to death and Laurayne will be a marvelous queen for us and her court will be great too.”

Hetrick-Irwin also said it’s been at least 10 years since a contestant earned multiple awards prior to being crowned queen.

“Mitzi Sears, in 2004 was the only other one to accomplish that,” she said. “Laurayne was outstanding and the judges saw it. She’s going to be a big asset and there’s no doubt about it.”

Hetrick-Irwin also acknowledged the rest of the contestants for their respective performances including Ann DuPont and Lorena Myers.

DuPont performed an original short story, while Myers treated the audience to a martial arts routine.

The evening’s program provided for a number of various musical performances, including Tom Saitta and Tommy Deering, along with a quartet of young women called the Unicorns.

The audience was also treated to the vocal talents of Bobby and Laura Hudson.

Gov. Brian Sandoval extended a written personal greeting and congratulations to all of the contestants of the pageant on Saturday.

“I hope you enjoy this unforgettable event, and I send my sincere congratulations to all of the performers for their outstanding talent and commitment to the community,” the governor stated.