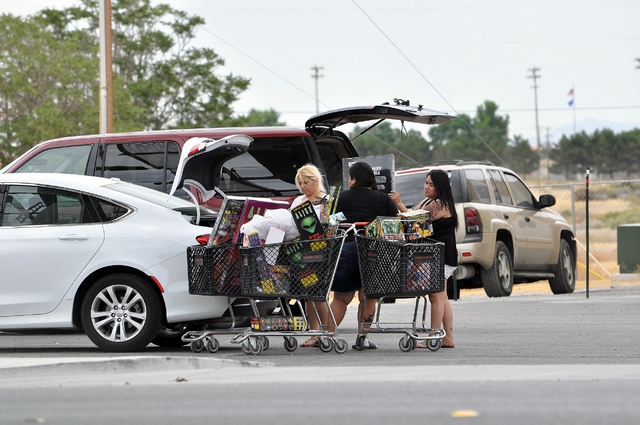 Horace Langford Jr./Pahrump Valley Times Shoppers prepare for the Fourth of July at a Pahrump fireworks store. Neighboring Clark County fire officials sent letters to fireworks stores in Pahrump and Amargosa Valley asking them to remind customers that certain fireworks bought locally may be illegal in the Las Vegas Valley.

Clark County is again fretting about the annual influx of fireworks for the Fourth of July not legal in their jurisdiction.

However, Nyes neighbors to the east are taking a more proactive approach this year by trying to educate customers buying fireworks in this county that what they are purchasing here may by illegal in that county.

Clark County Fire Chief Greg Cassell sent a letter in partnership with multiple agencies to fireworks vendors in Pahrump and Amargosa Valley, as well as the Moapa band of Paiutes north of Las Vegas, to let their customers know that fireworks purchased in locations outside Clark County … may be illegal for use.

It is unlawful for any person to possess, store, sell or use dangerous fireworks in Clark County and Las Vegas Valley jurisdiction unless approved for use as part of a permitted professional fireworks show, the letter states.

Only the Paiutes were mentioned by Clark County as agreeing to distribute the Cassell-penned letter.

Dangerous fireworks in Clark County includes items made of highly-combustible materials that explode on the ground or in the air, including firecrackers, Roman candles, sky rockets, and torpedoes.

A visit to busy fireworks stores around Pahrump on Monday found the Clark County letter taped to one door, but no sign of it at other locations.

But while all types of fireworks are for sale in Nye County, it is not anything goes here either. It is unlawful to shoot off aerial fireworks anywhere in town except at the designated site on the fairgrounds. It is punishable by up to a $1,000 fine and six months in jail.

Dan Schinhofen, a Nye County commissioner, said Monday that the county ordinance was changed to allow the shooting of aerial fireworks at the Fireworks Safety Site at the fairgrounds on Fox Avenue off Gamebird Road, as long as they were purchased at a Pahrump store.

The ordinance was also changed to allow non-aerial fireworks on personal property, as long as the person owns the property or has permission from the owner. Water or a fire extinguisher must also be within 25 feet of the activity.

Last year, for the first time since my grandchildren have been born, we all gathered at my house and had a show for the kids, Schinhofen said.

The Bureau of Land Management also issued a statement during the weekend reminding people that fireworks of any kind, including the so-called safe and sane, are not allowed on public lands. Fire prevention patrols are underway in high-fire danger areas leading up to next Mondays holiday.

Violations can result in a fine of up to $10,000 and a year in jail as well as the costs associated with resource damage, suppression costs, and injuries if found guilty.

Tuesday marked the start of selling through July 4 the safe and sane fireworks in Clark County at various booths in that jurisdiction.

This new outreach approach by Clark County followed numerous community calls during last years holiday, with some fireworks exploding until 3 a.m., according to Clark County officials. At an Aug. 18 Clark County Commission meeting, the commissioners were told the county fire department responded to 600 fireworks calls on the Fourth of July.

The new push by Clark County included a 30-second public service video that shows a cartoon character purchasing from the Ill Eagle Fireworks stand, branded Not Safe and Sane with a sign pointing east to Las Vegas, while the merchant is counting the money.

And its not just to the east from where Pahrumps fireworks industry receives a watchful eye. California Highway Patrol has been known to sit along the highways looking for travelers bringing back explosive goodies.

Those caught driving into California possessing certain fireworks face federal charges as well as that states charges for illegal fireworks.