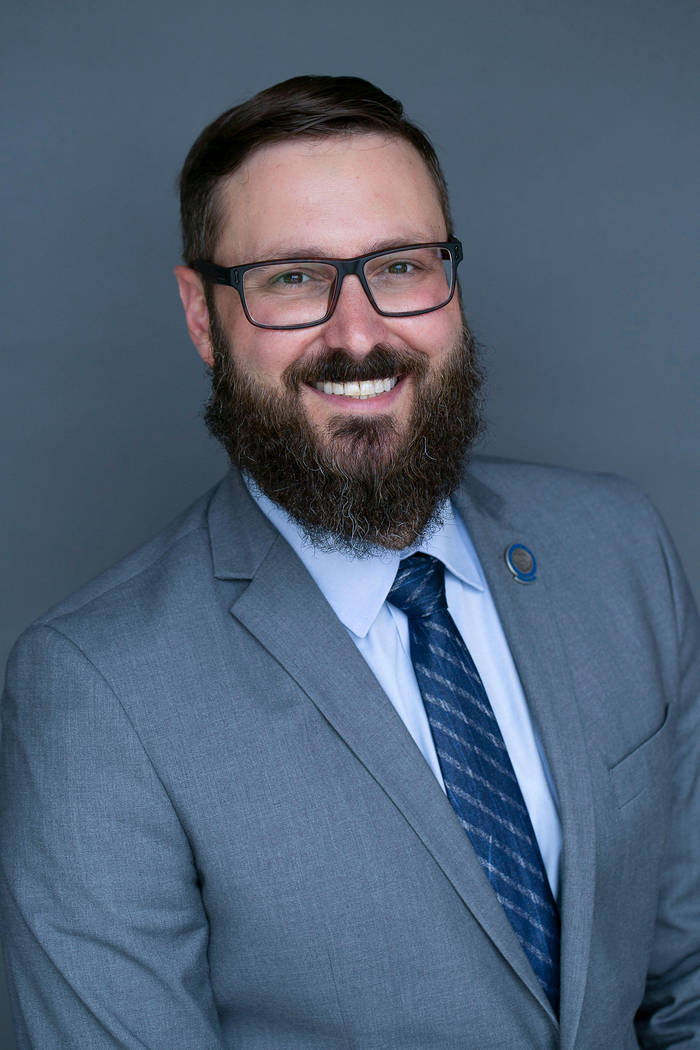 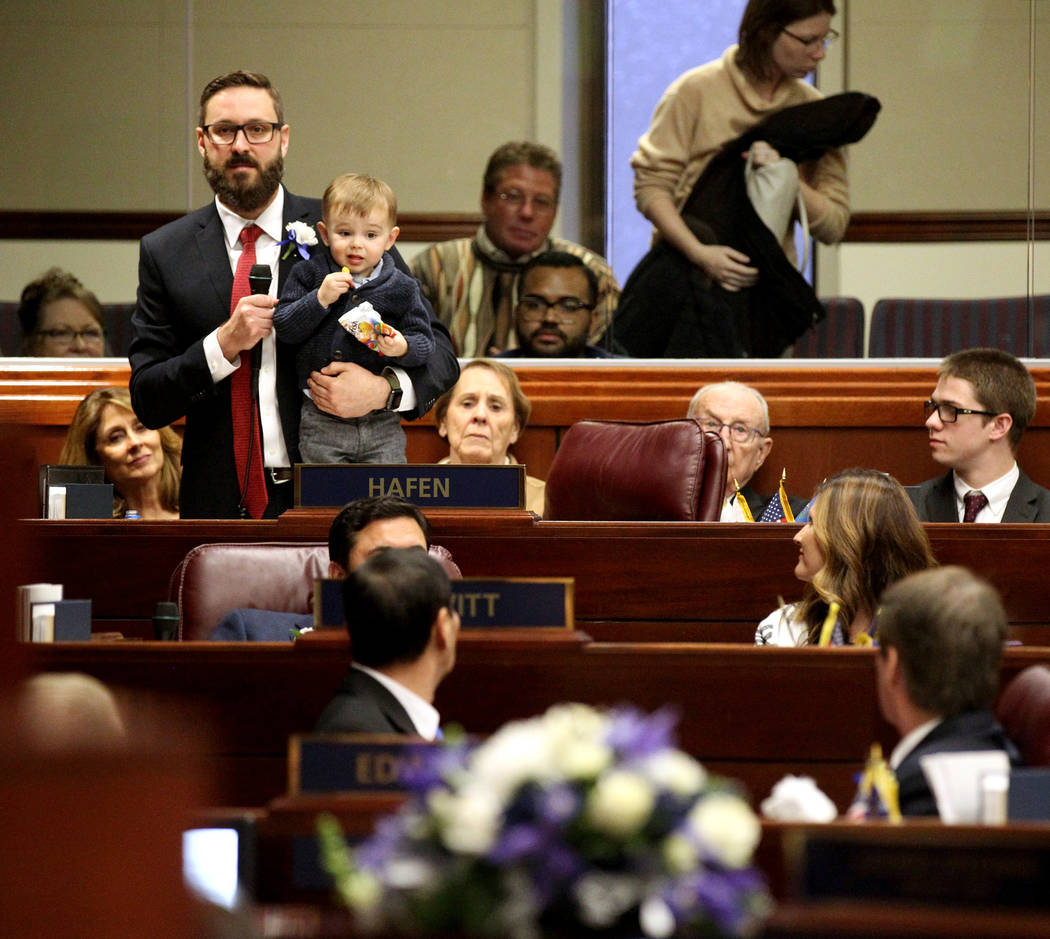 K.M. Cannon/Las Vegas Review-Journal Assemblyman Gregory Hafen II, R-Pahrump, introduces his family, including his son Harrison, then 1, in the Legislative Building in Carson City on the first day of the 80th session of the Nevada Legislature Monday, Feb. 4, 2019. 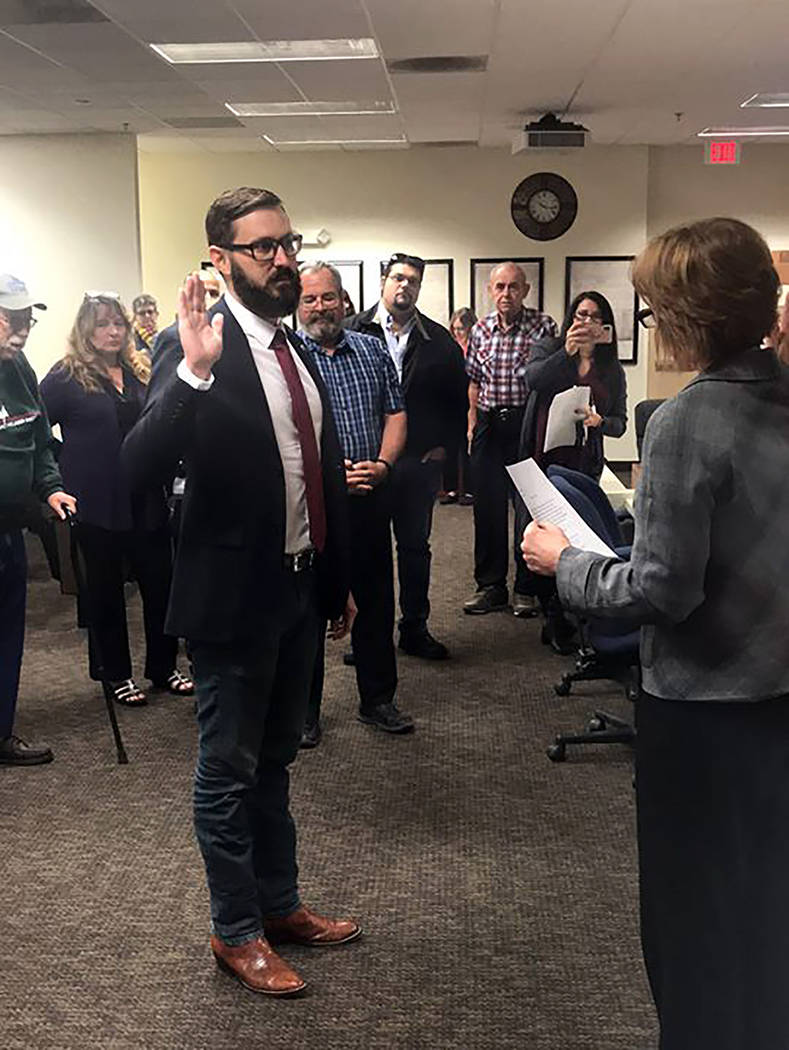 Special to the Pahrump Valley Times Assemblyman Greg Hafen II is pictured taking his oath of office in front of Nye County Clerk Sandra Merlino and officials from Nye, Clark and Lincoln counties following his appointment in 2018. Photo courtesy of Nye County.

Pahrump resident and Nevada District 36 Assemblyman Greg Hafen II announced this week that he will be seeking that seat in the 2020 election for what will be his first-ever official bid for office.

Hafen, a 36-year-old Republican, was originally appointed to the post of Assemblyman by the Nye County Commission in December 2018.

He was selected to hold the office for the 2019-2020 term, taking the place of well-known brothel owner and Republican Dennis Hof, who passed away in October 2018 before posthumously winning the election for district 36 less than a month later.

Hafen is a member of three Assembly committees, including government affairs, health and human services, and taxation. In the 2019 Legislative Session, he was a primary sponsor for 11 separate bills as well as a co-sponsor of 36 other bills covering a wide variety of topics, ranging from education to health care to firearms and more.

Hafen’s intention to enter the 2020 race for Assembly was announced in a news release issued by the Nevada Assembly Republican Caucus, which has endorsed him in the race.

“Republican Assemblyman Gregory Hafen II announced he will run in 2020 for the Nevada State Assembly in District 36. Gregory was appointed to fill the open Assembly seat in December 2018, having received the support and votes from the Lincoln, Clark, and Nye County Commissions,” the Aug. 13 release read.

It goes on to detail that Hafen is a native-born Nevadan, representing the fifth generation of his family to call the state home. In addition, Hafen is following in the footsteps of his grandfather, Pahrump resident Tim Hafen who held the very same seat that Hafen II now occupies, having been elected as district 36 assemblyman in 1966 and serving eight years.

“Gregory holds strong Republican values and would be honored to have the opportunity to bring those ideas and perspectives to the Nevada Legislature again in 2021 as the representative for Assembly District 36,” the release stated.

“I am a firm believer in serving all of the communities of Assembly District 36 to the best of my ability. We need to ensure Republicans continue to have a seat at the table to fight for our core beliefs, which include, minimizing taxes, standing up for the Second Amendment, and fighting for the water rights of every Nevadan. I am honored to have the endorsement of the Assembly Republican Caucus and its members who share and support these core beliefs,” Hafen II was quoted as stating.

“While serving this past session, I fought for rural Nevada and our veterans,” Hafen II told the Pahrump Valley Times. “As a co-sponsor, I am pleased that we were able to pass AB141. This bill focused on bringing down the high costs of prescription drugs. I was disappointed by the anti-business and anti-Second Amendment legislation. I plan to not only continue to fight against this bad legislation, but I have already started working on legislation to expand our gun rights.

“I am also looking into ways to make our government run more efficiently and I want to expand school choice, so parents can choose the best school to fit their children’s individual needs,” he said. “I look forward to continuing to work hard and fight for Assembly District 36.”

“I am proud to endorse Gregory Hafen II in his bid to return to Carson City as the representative from Assembly District 36,” Titus said. “This past session, Republicans stood together against the Democrats’ national agenda and Gregory was an integral part of that success. Please join me in supporting his candidacy and helping to ensure he returns to the Nevada Legislature in 2021.”

Hafen II, the proud father of his 2-year-old son Harrison, is a graduate of the University of Nevada, Las Vegas, holding a bachelor’s degree in business management. Following his time in college, Hafen II began his career in his family’s Pahrump Utility Company, working his way up to the position he currently holds with that company, general manager.

For more on Hafen II and his 2020 run for office visit www.hafen4nevada.com

At this time, the only other person to announce their intention to run against Hafen II for Assembly District 36 in 2020 is Republican Dr. Joseph Bradley, who sought the seat in the 2018 election, as well.