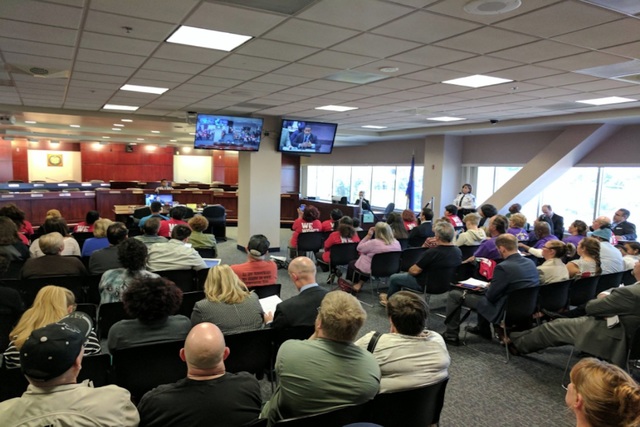 Business owners and low-wage workers watch on screens Wednesday at the Grant Sawyer Building in Las Vegas as the Nevada Legislature discusses AB175. The measure would raise the minimum wage by $1.25 per hour each year until it reaches $14 if an employer provides health insurance, or $15 per hour if no insurance is offered. Colton Lochhead/Special to the Pahrump Valley Times 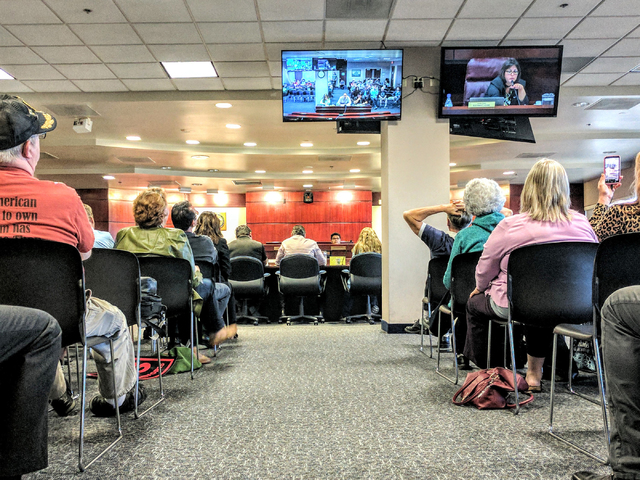 Supporters and opponents of Assembly Bill 175, which would raise Nevada’s minimum wage, packed into the Grant Sawyer Building, 555 E. Washington Ave., on Wednesday, Feb. 15, to watch the Legislature hearing on the bill. Colton Lochhead/Special to the Pahrump Valley Times

CARSON CITY — Business owners and low-wage workers jammed hearing rooms in both ends of the state Wednesday to face off over a bill to raise Nevada’s minimum wage.

Assembly Bill 175, introduced Monday by Assemblyman William McCurdy II, D-Las Vegas, would raise the minimum wage by $1.25 per hour each year until it reaches $14 if an employer provides health insurance, or $15 per hour if no insurance is offered.

“This is our opportunity to boost our Nevada families,” McCurdy said.

But business groups and small business owners said the raise would result in job losses and have a ripple effect on wages that puts companies out of business. They said it also would reduce opportunities for young people who take entry-level jobs.

Robert Buckel, a small business owner in Las Vegas, said if he paid everyone equally under McCurdy’s bill it would cost him $100,000. But raising wages for lowest-paid workers would also require increasing pay for upper-level employees.

“I will be at 86 percent increased costs,” Buckel said.

“Raising Nevada’s minimum wage is an important step towards bridging the widening gap between income and opportunity inequality,” McCurdy said.

Assemblyman Ira Hansen, R-Sparks, said he was “sympathetic” to efforts to pay workers more, but factors such as illegal immigrants and unlicensed contractors contribute to the problem.

“Wages are really a function of supply and demand,” Hansen said.

Paul Sonns with the National Employment Law Project said a single worker without children in Nevada needs to earn $15 per hour to make ends meet, adding 536,000 workers in Nevada — about 4 in at 10 — make less than that.

After the hearing, Anderson issued a statement accusing Democrats of showing a “reckless disregard for Nevada’s small businesses.”

Peter Guzman, President of the Latin Chamber of Commerce, was among the people in a packed Grant Sawyer State Office Building in Las Vegas. He said the lawmakers pushing the bill need to reach out to small business owners for their input.

“Not enough has been done to find out the pulse of the small business community,” Guzman told the Review-Journal after testifying. “Small business is the engine that runs this country. So we have to be looking out for them.”

Several low-wage workers, from hospitality industry workers to home health care aides, testified about their struggles to provide for their families.

“I work two jobs to help support my family,” said Maria Salinas. The raise, she said, “will not make me or any other health care worker rich.”

Elliot Malin, with Americans for Prosperity, said restaurants, in particular, would have to raise prices.

Carlton said she looked up the price of buffalo wings from one chain restaurant at locations in different states with different minimum wages. The food prices varied by only a penny or two, she said.

“I find your argument about hospitality not quite accurate,” Carlton said.

Bryan Wachter with the Retail Association of Nevada said only 2.9 percent of U.S. workers and 1.6 percent in Nevada make minimum wage.

He argued that Seattle lost 11,000 jobs over six months after the city initiated raising its minimum wage to $15. He urged lawmakers to look at all labor-related issues such as requiring sick leave to adequately judge impacts on business.

Critics also decried the quick hearing, held only two days after the bill was introduced.

“The Las Vegas Metro Chamber of Commerce … is deeply concerned about the potential impact of AB175 on Nevada’s employers and employees,” Kristin McMillan, chamber president, said in a statement Tuesday.

She also said there was inadequate time to properly evaluate the bill, but the chamber opposed it on its face because of “a high potential of hurting job creation by employers, both large and small and adversely impacting the stability of existing jobs in this state.”

Under a constitutional amendment approved by voters in 2006, Nevada has a two-tiered minimum wage scale, currently $8.25 for workers not offered health benefits. It is $1 per hour less if insurance is offered.

A bill introduced in the Nevada Senate seeks a gradual increase of 75 cents per hour each year until it reaches $11 with insurance or $12 without insurance.

Even if a minimum wage increase is approved by lawmakers, its ultimate fate is not assured.

Democrats control both chambers of the Nevada Legislature, though they lack super-majorities needed to override vetoes by Republican Gov. Brian Sandoval. Sandoval has not taken a stance on the bill, though he has historically opposed a legislative mandate to increase the minimum wage.

No action on the bill was taken by the committee.