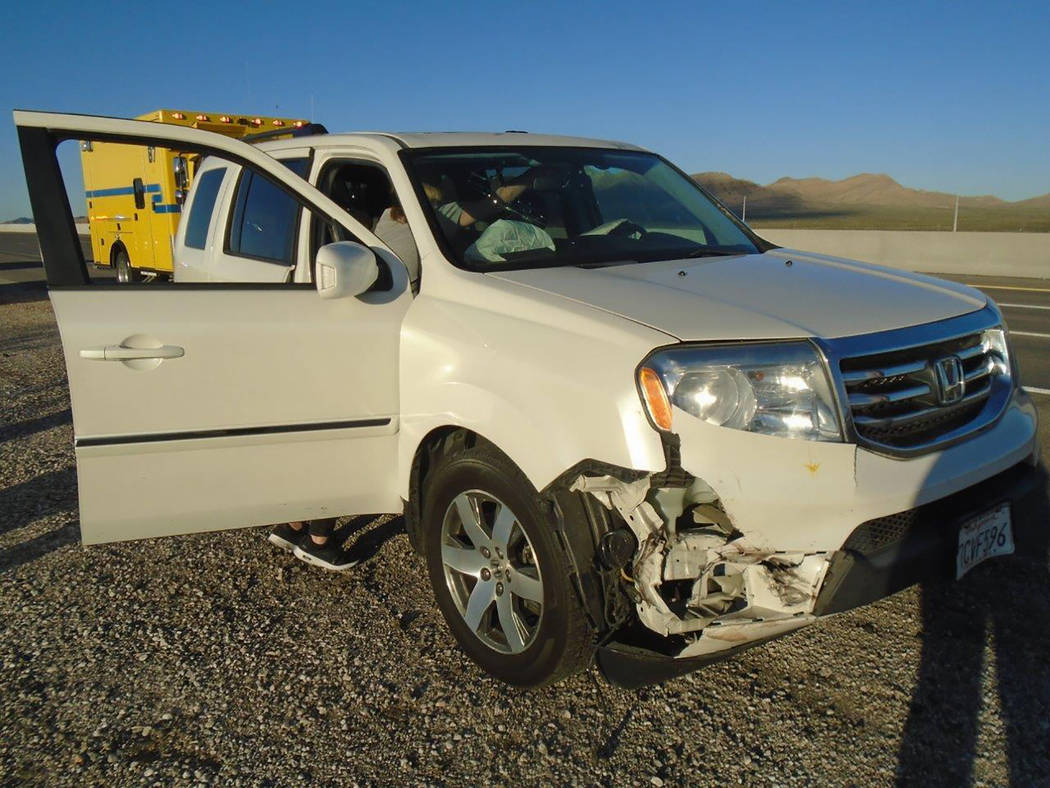 Special to the Pahrump Valley Times The impact of tire debris caused the activation of an SUV's frontal air bags while traveling along the highway in Jean, Nevada recently. Nevada Highway Patrol Troopers are warning motorists around the Silver State to be aware of tire and other debris along the highways, as hot temperatures arrive in southern Nevada.

As triple-digit temperatures are just around the corner, officials with the Nevada Highway Patrol (NHP), are warning all Silver State motorists about the risks associated with driving in Southern Nevada’s hot weather.

NHP Public Information Officer Jason Buratczuk said in a news release that summertime temperatures present a diverse set of perils as individuals and families pile in the family vehicle for their annual summer road trip.

First and foremost, Buratczuk warned drivers about the increasing dangers of road debris along the highways, as troopers regularly respond to debris calls each day.

The rubber meets the road

“The hot weather in Southern Nevada is very tough on vehicle tires,” he said. “With ambient air temperatures around 100 degrees, the freeway pavement may be 120 to 130 degrees. As we see the warmer temperatures, we will also see more and more tire failures where tires completely blow out and leave tire tread on the roadway.”

Additionally, Buratczuk said that striking tire debris on the highway can obviously cause severe damage to any vehicle, depending on the size of the tire tread left behind.

He also noted that attempting to avoid road debris may not be the best option for the driver, as swerving out of the way of tire tread may cause secondary crashes as a result of the evasive maneuver.

“At freeway speeds, suddenly braking and jerking the steering wheel in one direction upsets the weight and balance of the vehicle and can cause a vehicle to lose control,” he said. “We recommend that if you happen to come up on tire tread or any other debris in the roadway, it is recommended to run over it and not swerve to avoid it.”

Tire debris aside, Buratczuk said NHP troopers have safely removed other types of debris along the highway travel lanes, including refrigerators, living room furniture, and even washing machines.

“You name it and we have removed it from the travel lanes,” he said. “Ladders falling onto the freeway are a daily occurrence and can cause severe damage to vehicles if struck. Equipment or parts that fall from other vehicles on the freeway are subject to a traffic citation for unsafe, unsecured loads. All motorists are responsible for their vehicles and everything that may fall from the vehicle onto the freeway.”

If drivers notice a considerable amount of debris along the roadway, Buratczuk said it’s best to notify the Nevada Highway Patrol.

“Depending on the debris you have struck, it may have caused damage to your vehicle,” he said. “Call 911 or *NHP, and a trooper will respond to complete a crash report. The driver will not be listed at fault for striking the debris. Also, Nevada state law requires every vehicle on the road to have the minimum coverage of auto insurance allowed by the state of Nevada.”