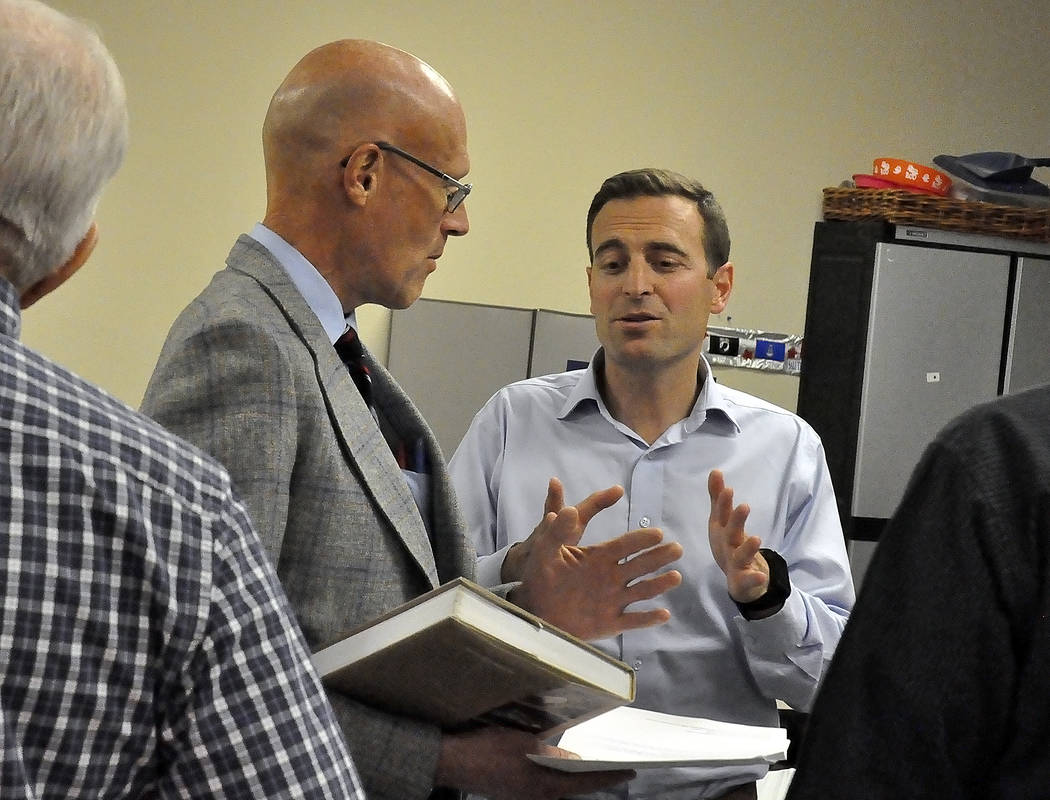 Horace Langford Jr./Pahrump Valley Times Bill Stremmel, of Cybertran International, shows Nevada Attorney General Adam Laxalt a book on Yucca Mountain project titled "A Waste of a Mountain." Laxalt, who is running for Nevada governor, said that he will continue opposition to the project, if he wins the election. 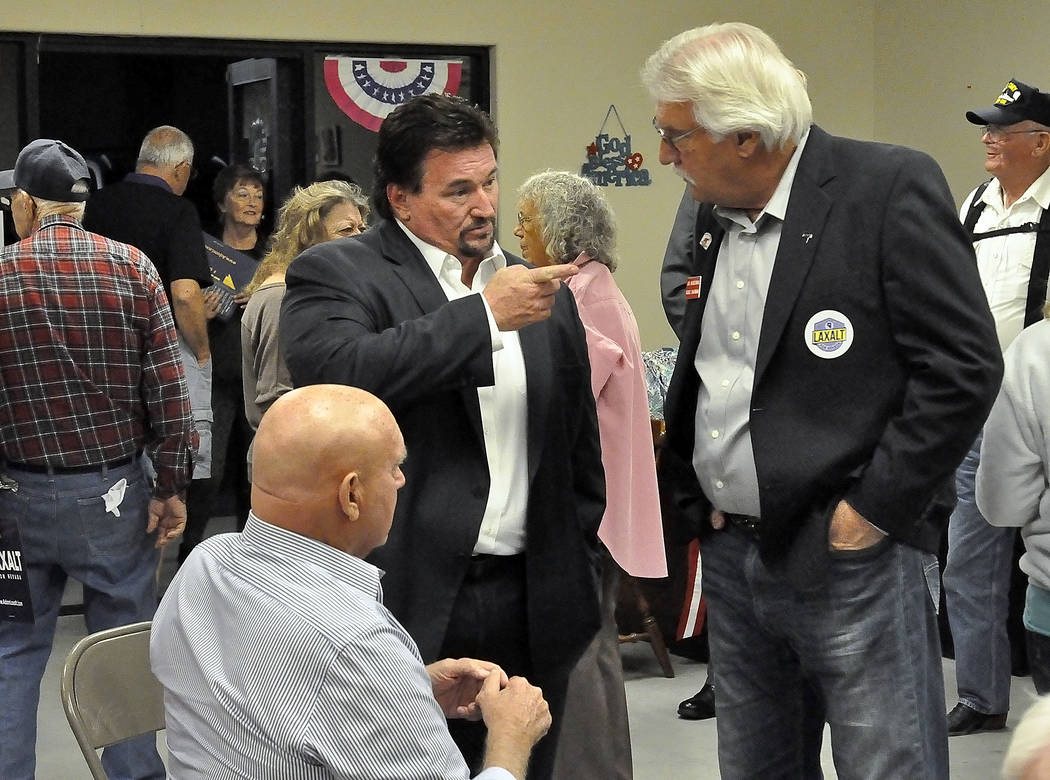 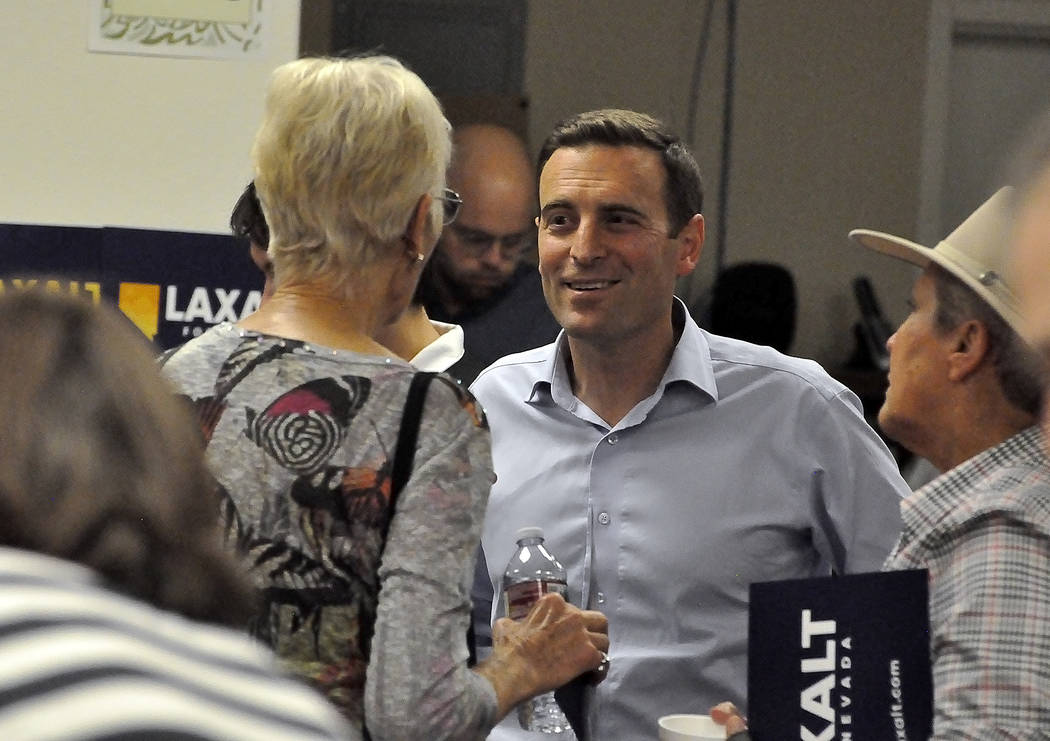 Horace Langford Jr./Pahrump Valley Times - Nevada Attorney General Adam Laxalt rounded up his gubernatorial tour "The Laxalt 17" with a stop in Pahrump on Tuesday night after visiting all of Nevada's 17 counties. Laxalt kicked off his “The Laxalt 17” on Nov. 1, after he announced his gubernatorial bid at Brady Industries’s Warehouse in Las Vegas. 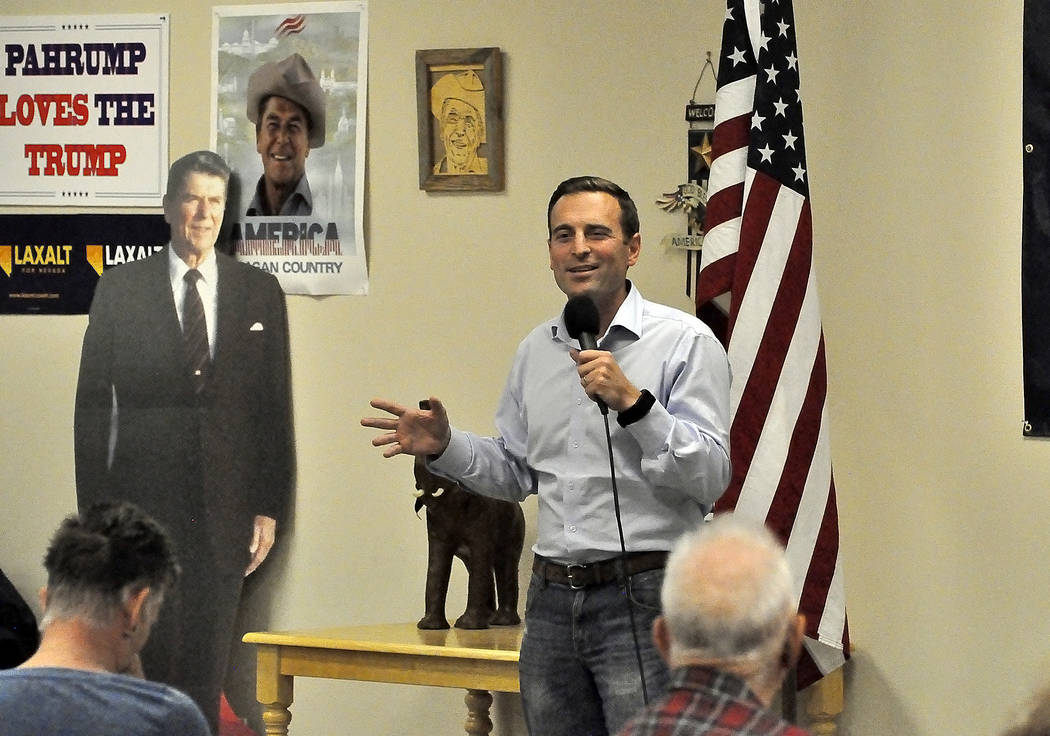 Horace Langford Jr./Pahrump Valley Times - During his 13-minute speech at the Nye County Republican Headquarters, Nevada Attorney General Adam Laxalt called on those in attendance to become a part of his team, help to build a base of grassroots army and get the word out about his gubernatorial campaign. 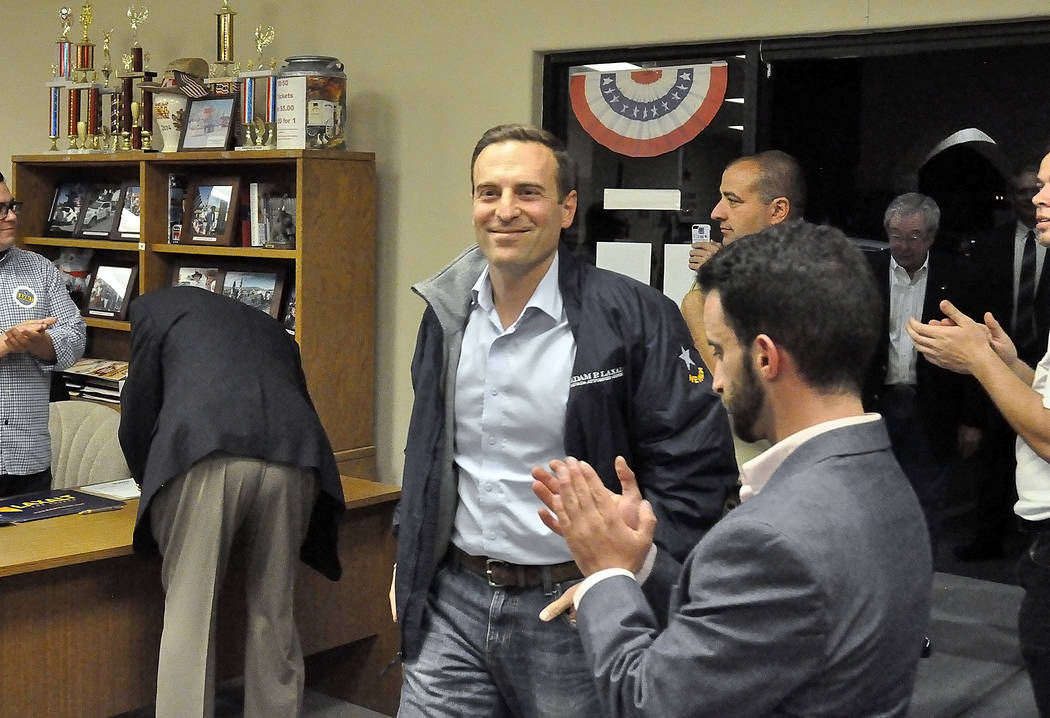 Wrapping up his statewide tour, Nevada attorney general and gubernatorial hopeful Adam Laxalt made his pitch to an enthusiastic crowd in Pahrump on Tuesday night, asking area residents for their support.

During his 13-minute speech at the Nye County Republican Headquarters, Laxalt called on those in attendance to become a part of his team, help to build the base of a grassroots army and get the word out about his campaign.

“I’m motivated for this race,” Laxalt said. “As I started, it’s just incredible to see how much support there is out there, how people are ready to help me get over the line,” he said.

Laxalt, a Republican, said he wants to work on jobs, economic development and education.

“We all know we are sitting at the bottom, and that’s unacceptable. We need to fight harder to improve our education across the state,” Laxalt said.

He called public safety “the most important job” of government.

“We face threats from all around the world. Things look very different today than they did years ago,” Laxalt said. “People need to feel safe in their communities and we’ve done that, we’ve worked on that as your attorney general, and I will continue to make public safety a top issue if you all elect me as your governor.”

Laxalt, grandson of former U.S. Senator and Nevada Gov. Paul Laxalt, was elected as Nevada attorney general in 2014 when he pulled an upset victory over two-term Democratic Secretary of State Ross Miller.

Laxalt touted his Office of Military and Legal Assistance, an attorney general office-led program where lawyers work pro bono on cases of active duty members and reservists; reduction of the 8,000 rape kit backlog; efforts to combat the opioid crisis and fraud against the elderly.

He also talked about his childhood, past struggles with alcohol addiction, service in the U.S. Navy, and his career in Nevada politics.

“Being in the Navy shaped me as a leader, gave me a lot of perspective, and made me motivated to continue to serve and give back to our community, but it also gave me my wife,” Laxalt said.

His wife, Jaime Laxalt, who is currently expecting the couple’s first son, had accompanied Adam Laxalt during several stops of the tour.

The Nye County Republican Central Committee hasn’t yet made a formal endorsement in the governor’s race.

“They do get elected, they start voting, they don’t vote conservative, but I know this man will. He is a true conservative,” Burdzinski said about Laxalt.

“Adam has done many things for the state of Nevada, … and when he says, ‘I’m going to do this,’ he will do it,” Burdzinski said.

“We will see,” someone uttered from the audience under a round of giggles.

“Mark my words, he will do it,” Burdzinski replied.

Laxalt kicked off his “The Laxalt 17” on Nov. 1, after he announced his gubernatorial bid at Brady Industries Warehouse in Las Vegas. Laxalt visited all of Nevada’s 16 counties plus Carson City over a seven-day span. The bid announcement had been delayed about a month by the Las Vegas shooting that left 58 people dead and more than 500 injured on Oct. 1.

Laxalt, who is running to replace term-limited Gov. Brian Sandoval, is considered a heavy favorite in the Republican primary. Other Republicans who have announced their candidacies for governor include Nevada Treasurer Dan Schwartz and Las Vegas bike shop owner Jared Fisher.

On the Democratic side, Chris Sisolak and Chris Giunchigliani, both Clark County commissioners, have announced their bids so far.

“It’s going to be a huge race, every vote is going to matter,” Laxalt said. “Of course, we hope we got a huge, huge lead, but you know, it’s a tight state these days.”

Flanked by his staff members during his Pahrump stop, Laxalt made his way around the room shaking hands and talking to people after his speech. Former Nevada Governor Robert List, who was invited by Laxalt to join the tour, was also with him in Pahrump.

“He keeps his promises, he works hard. He is an overcomer. He has overcome so many obstacles in his life, … he just never stops working,” List said about Laxalt.

Laxalt has recently run into disagreement with Sandoval over the renewed efforts to repeal the commerce tax that was passed by the 2015 Legislature. A signature achievement of Sandoval, the commerce tax was levied on businesses that bring in more than $4 million annually. The increase was meant to boost funding for the education system in Nevada.

While Sandoval has lambasted the effort to undo the commerce tax, Laxalt expressed concerns whether the repeal would affect education funding in the state.

“I applaud the governor, and we share the same goals of improving education in the state of Nevada,” Laxalt said during an interview following the event. “The commerce tax is less than one percent of overall spending in the state, and I’m confident that it’s not going to hurt education, and we are going to be able to be fine. If the commerce tax is repealed, education will not to be hurt,” he said.

List said while many politicians “go back and forth trying to please everybody,” he said people admire Laxalt’s integrity.

“In the end, I think that people will judge him to be a guy who stands on his beliefs, does what he says he is going to do,” List said. “And to me, this race, in the end, will be about character more than anything.”

He said that he plans to continue opposition to the proposed nuclear waste repository at Yucca Mountain. The plan to store highly-radioactive waste inside the Nye County mountain is widely opposed by most Nevada officials.

Nye County, however, has been the strongest supporter in Nevada. County officials have long cited economic benefits that the project could create for the entire state. When asked if Laxalt is planning to take into account Nye County’s position, he said that as a governor, he would represent all of Nevada’s 17 counties.

Laxalt declined to comment on the American Civil Liberties Union lawsuit that was filed over indigent defense in Nevada’s rural counties including Nye and Esmeralda. The class-action lawsuit alleges systemic failures in Nevada rural counties’ public representation of defendants who cannot afford lawyers.

“That was just filed a few days ago, it’s in our office, and I can’t comment on pending litigation,” Laxalt said.