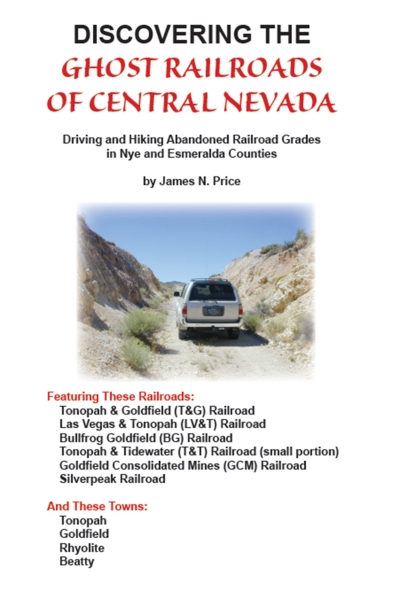 GOLDFIELD – If you ever wanted to explore the railroad system of Central Nevada, a new book will guide you through various towns doing just that.

Written by author James N. Price, “Discovering the Ghost Railroads of Central Nevada: Driving and Hiking Abandoned Railroad Grades in Nye and Esmeralda Counties,” takes readers on a journey through 35 railroad-related sites between Mina and Beatty, including Tonopah, Goldfield and Rhyolite.

The histories of these areas and their “ghost railroads” are detailed in the book, providing readers with useful pieces of information concerned with Nevada’s ghost rush history and its railroad past.

Living in Goldfield part time, Price came up with the idea after wondering about the background of the area.

“I’ve always been interested in the old town mining aspects of the area and I’ve also been very keenly interested in the railroad histories,” Price said. “As a lot of railroads were built to service these towns, but they’re all gone now.”

A couple of years ago Price and his wife Joan started checking out some of the mines, but he didn’t buckle down and actually start the book until about a year ago.

“Around two years ago we started to explore some buildings, some trestles, some railroad grades, ones we could walk or drive,” he said. “We just started asking around and started exploring maps and stuff and we found all the lines that were built here â¦ and over the years we have traced the railroad grades.”

Price said that they haven’t been over every mile of the railroad grades, but just the ones that were fairly easy to get to. From that, they cataloged the sites, took pictures and made maps of those areas.

Surprisingly, Price said he didn’t run into any real issues while searching around the old railroad grades, as most of them are easily accessible.

“No, not really. I mean it’s wide open country everywhere that they are,” Price said. “In Goldfield several of the rights of way are on maintained roads and so there is no issue there.”

The ease of following the grade is what surprised Price the most during the research of this book.

“Our biggest discovery in the Goldfield area is that there are five miles of railroad grade that you can just drive,” he said. “It’s a dirt freeway and it’s obvious once you’re on it, you know you’re on it as you can see cuts and tilts.”

Having just received the book, Price will not have a signing at Goldfield Days but he’ll be around all three days. The book is for sale in stores there and in Tonopah. He said a book signing tour is tentatively planned for sometime this fall or winter.