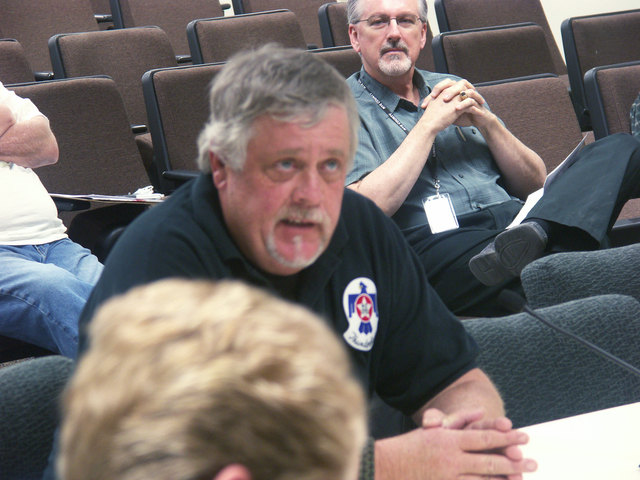 After roughly two months on the job, the town’s new code enforcement department appears to be making some headway in getting local vendors to comply with town ordinances.

A recent incident however has raised concerns with town officials on how some local residents are reacting to the department’s authority.

On Saturday, Harper’s authority and patience was tested by a man who chose to set up shop at the corner of Gamebird Road and Homestead just after 11 a.m.

When Harper inquired about a business license, the man, identified as Don Cox, according to Town Manager Susan Holecheck, began hurling profanities including the “F” word toward Harper, who was doing what he was hired to do by the town in March.

Cox is the spouse of Nye County Commissioner Donna Cox.

“I don’t at all condone any form of abuse when someone is trying to do their job. Our code enforcement officer on Saturday approached an individual just to inquire about a license. Our officer was met with abusive and offensive language and was basically told that he didn’t have to comply because ‘the town wasn’t going to exist anymore.’ That’s very unfortunate that any employee would have to take on that kind of abuse and it’s particularly disturbing to know that this individual is the spouse of a county commissioner,” she said.

Cox did not respond to a phone call on Tuesday seeking comments on the matter.

This week, town board member Dr. Tom Waters provided his thoughts on the incident.

Waters suggested that just because the Nevada Supreme Court upheld the county’s decision to disband the town board, does not mean laws and ordinances will follow suit.

“Mr. Cox is obviously in the wrong but I don’t think he would ever admit he’s wrong. His commissioner wife should educate him on the fact that laws are laws and the Town of Pahrump is not going anywhere,” he said.

“Obviously with the county taking over the town, they’re certainly not going to eliminate the business license ordinances. This person was way out of line and that person needs to be cited and brought to justice. If they don’t then everybody and their brother will say they don’t have to comply. We cannot have our authority undermined. Until Jan. 5, the town is responsible for this operation until the county takes over. It’s a five dollar fee for the license and to act like that when your wife is a county commissioner is absolutely incredible,” he said.

Holecheck, meanwhile, said both town and county officials should work to make the transition process as seamless as possible.

She also noted that the issue is being dealt with through the proper channels.

“We need to put all of the negativity aside and work together. Abusive and intolerant behavior is not going to make a smooth pleasant transition. I instructed the code enforcement officer just to let it go. I am working now to find a way to deal with it. There was a sheriff’s deputy who was in the area at the time and I was glad they were there because it sounded as though the situation could have escalated into an altercation but the individual’s behavior was completely unnecessary,” she said.

Holecheck said she will contact county officials to determine what needs to be done to any avoid similar incidents in the future.

As a footnote, Cox at the end of this week’s town board meeting appeared to taunt board members during public comment.

His message was brief.

“Short and sweet. Bye bye,” he uttered to the board and staff.