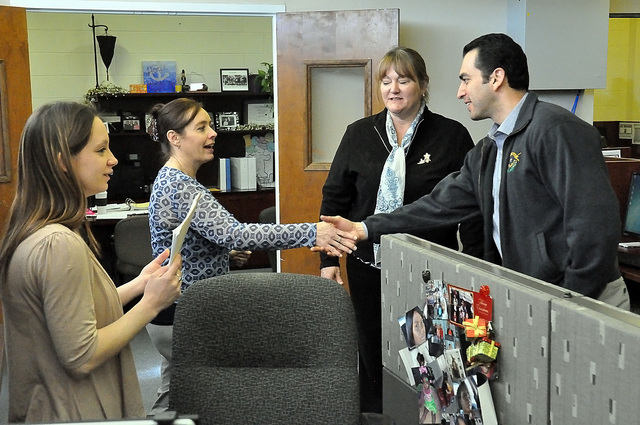 Ruben Kihuen, Nevada’s 4th Congressional District Representative shakes hands with an employee during his tour of NyE Communities Coalition on Friday. The stop marked Kihuen’s first visit to Pahrump since he was elected a congressman in November. Horace Langford Jr. / Pahrump Valley Times 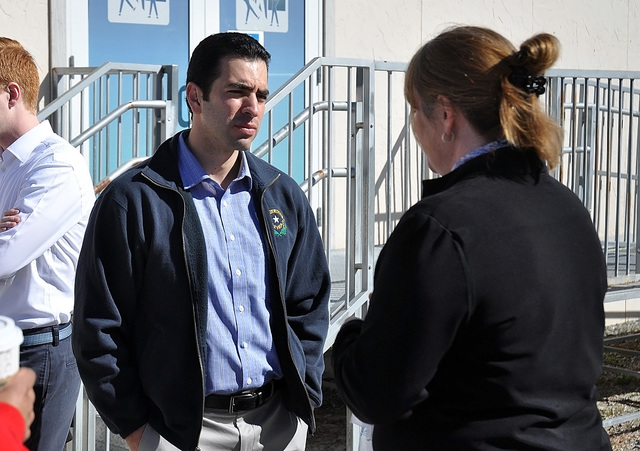 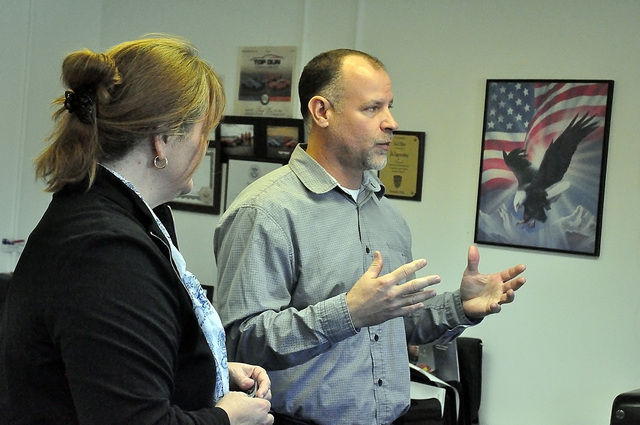 In his first visit to Pahrump since winning the election in November, Nevada Congressman Ruben Kihuen learned about the town’s issues.

Accompanied by several local officials and members of his staff, Kihuen took a tour of NyE Communities Coalition where he met employees, asked questions about jobs and got an insight into Pahrump’s issues.

During the tour that took place on Friday morning, Stacy Smith, director of NyE Communities Coalition told Kihuen about programs that are offered at the organization.

Smith said the organization also works with several partners. It has a community outreach that deals with many issues. The homeless is among them.

“How prevalent is the homeless issue here?” Kihuen asked.

According to the NyE Communities Coalition, this year, Nye County School District had 335 homeless children as of January 2017. The number is down from last year’s 437.

“We’ve got a lot of great volunteers, 60 or 70 partners in this community that are members of the coalition. A lot of faith-based partners, a lot of organizations. Definitely, Nye County and Pahrump struggle with a lot of issues but volunteerism and support of this community is not one of the problems that we have,” Smith said.

Albert Bass, Southern Nevada rural counties mobility manager and member of the transportation committee told Kihuen about some of the challenges the local transportation program has faced.

“Nye County is well known as the most transportationally-challenged area of the state,” Bass said. “We have a lot of issues and transportation is more than just roads and highways. It’s the movement of people and the mobility of people and we have a huge challenge with not having county-supported public transportation.

“It’s been 15 years in the works. They’ve been trying to work on getting a system established and we are so close.”

Kihuen’s visit marked his fourth showing in Pahrump. He campaigned in town during the primaries last year.

In a four-day listening tour, Kihuen visited Yerington, Hawthorne and Mesquite, and held an open house in North Las Vegas as part of his first tour in Nevada’s 4th Congressional District.

Following his visit, Kihuen told the Pahrump Valley Times that he has seen similar issues across the district throughout his tour.

“Rural access to health care is probably one of the most prevalent (issues). You still have a lot of folks out there who are not covered, and those who are covered don’t have a nearby hospital or nearby facility to get health care. That’s No.1. No. 2 is transportation.”

The district has a high population of veterans and Kihuen said they don’t always have the opportunities to begin a new career of military-specific training. Kihuen recently introduced his first bill that aims at helping veterans to land jobs.

“Veterans’ issues are non-partisan issues. We should put our parties aside and be able to address veterans’ issues,” Kihuen said.

“I made the promise during the campaign that I would not ignore any part in our district, and one of the first things that I did, once I got elected, was I assigned my stuff to organize this tour,” he said.