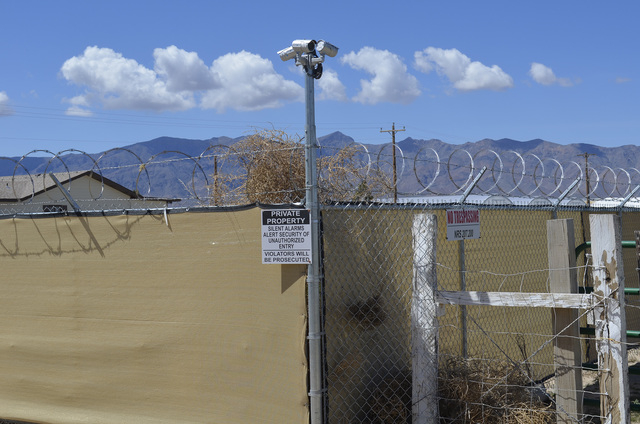 A medical marijuana establishment in Pahrump has set its eyes on a new location, but some nearby residents said the addition will not benefit the neighborhood.

A request to move the establishment from 2801 E. Thousandaire Blvd. to 9680 S. Oakridge Ave. was approved at the last Nye County board of commissioners’ meeting after Amanda Connor, agent for Nye Natural Medicinal Solutions made a request to the board.

The location at South Oakridge Avenue is an existing site of a medical marijuana cultivation facility for CW Nevada and already has a special use permit.

“The proposed cultivation facility will be located in two portable PharmPods that are designed and created for growing plants indoors,” Connor said in a letter.

Nye Natural Medicinal Solutions was awarded a provisional license from the state of Nevada to operate a medical marijuana cultivation facility in Nye County. A special use permit is consistent with the applicable standards of approval and will not have an adverse impact on adjacent properties, according to the letter.

Some nearby residents said that the facility over the past few months turned from “a wonderful looking nursery” to a prison.

Paul Ostrenger, who lives across the street from the facility, said that he hasn’t objected to it initially, but after a razor wire fence went up, the sight from his yard was spoiled.

“I’m kind of not happy about it, I know it’s there, maybe I have to deal with it what it is, but a new facility that is going to increase the traffic and increase everything. … It’s just ridiculous,” Ostrenger said.

He also complained about the smell of marijuana in his back yard and increased traffic around the facility.

“What’s there is there, I doubt any changes can happen to what is already there, but to put something else there, it’s just going to increase or double or triple what is already going on. And it’s not right,” Ostrenger said.

In the meantime, Connor said in her letter that adjacent properties shall have no substantial or undue adverse effect as the facility will have stringent security and will comply with all applicable laws and regulations.

Jason Thompson, president of CW Nevada, said he wanted to address the issues that were brought up.

“Certainly, we want to be a good neighbor,” he said.

“We have odor control, it’s never been represented to us that it’s been an issue before,” he added.

As suggested by Nye County Commissioner Dan Schinhofen, commissioners made a motion to grant a change of location under condition that the applicant will work with neighbors and make the facility “more attractive and less invasive.”

He also asked employees of the facility to drive on Silver Street and not Bond Street.

“I believe some of these issues can be worked out with the local property owners,” he said.