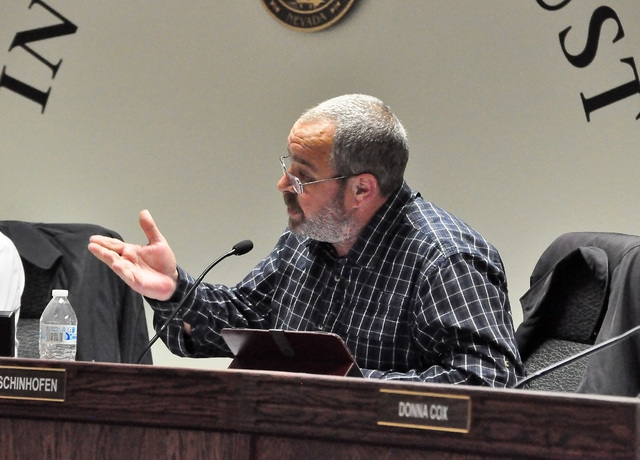 The county’s personnel policy manual is set to undergo changes to comply with grant requirements, but some officials want to make sure that the drug screening rules are fair to those employees who have to use medical marijuana.

The changes are necessary to comply with the requirement of grants that provide the revenue to employ personnel, Nye County Commissioner Lorinda Wichman said. The proposed language change matches the recommendations of the Nevada Public Agency Insurance POOL/PACT, Nye County’s insurance provider.

The primary change to the policy is the addition of the word “random” to drug screening.

The language is supposed to ensure no employees go to work with impaired capacity due to the influence of any substance, however Nye County Commissioner Dan Schinhofen said that the county should look into alternative methods of drug testing to make sure it goes beyond positive.

“No one should come to work impaired whether on illegal or prescription drugs, I agree with that,” he said. “My concern is once you tested positive, it does not necessarily mean (that) you are impaired.”

Speaking about the use of medical marijuana at the recent Nye County commission meeting, Schinhofen voiced concerns over how drug tests are done.

“I’m not saying people should come to work impaired at all, but if you are prescribed Marinol, which is a synthetic form of THC (tetrahydrocannabinol), and is approved by the federal government, and you test it, it comes out as THC,” said Schinhofen, who uses medical marijuana for chronic pain due to a degenerative disc disease.

Marinol is a synthetic federally legal form of THC.

“So, the double standard in that is troublesome to me,” he said.

Schinhofen also told the Pahrump Valley Times that putting an employer between an employee and doctor is a “troubling idea.”

His concerns were echoed by some Nye County officials.

“We’ve got to come up with a testing mechanism that goes beyond just positive,” County Manager Pam Webster said.

County Sheriff Sharon Wehrly was less amused with the idea.

As some county positions are grant funded, it must have the same drug testing policy as the grant provider, usually the federal government, Wichman said.

“The county must make the proposed changes for all county employees and not only those that are grant funded,” she said.

While the use of cannabis is illegal federally, Nevada has allowed possession and use of medical marijuana for more than 10 years. The Nevada Legislature bill in 2013 allowed dispensaries to open.

The state’s first medical marijuana dispensary, Silver State Relief, opened in Sparks in March 2015, after the bill went into effect in 2014.

Nevada currently has 24 certified medical marijuana dispensaries in the north and south. Nye County’s only dispensary, the Grove, opened its doors in Pahrump on March 2. Nye County also has 3 cultivation facilities.

John Laub, president of the Las Vegas Medical Marijuana Association who has been monitoring employee law changes in Nevada, said he was hoping Nye County would be “reasonable” on its drug screening policy.

“Medical marijuana can help with many conditions like other medicines and the employees of Nye County should not be precluded from its benefits for chronic pain, cancer, muscle spasms and other areas,” he said in an email.

Currently, Nye County employees are only subjected to a pre-employment drug screening or drug screening in the event of an accident. If an employee is found to be impaired on the job, they can face discipline and termination based on the circumstances.

“It is possible for someone to become impaired with legally prescribed medication of any kind, therefore any discipline must be based on circumstances,” Wichman said.