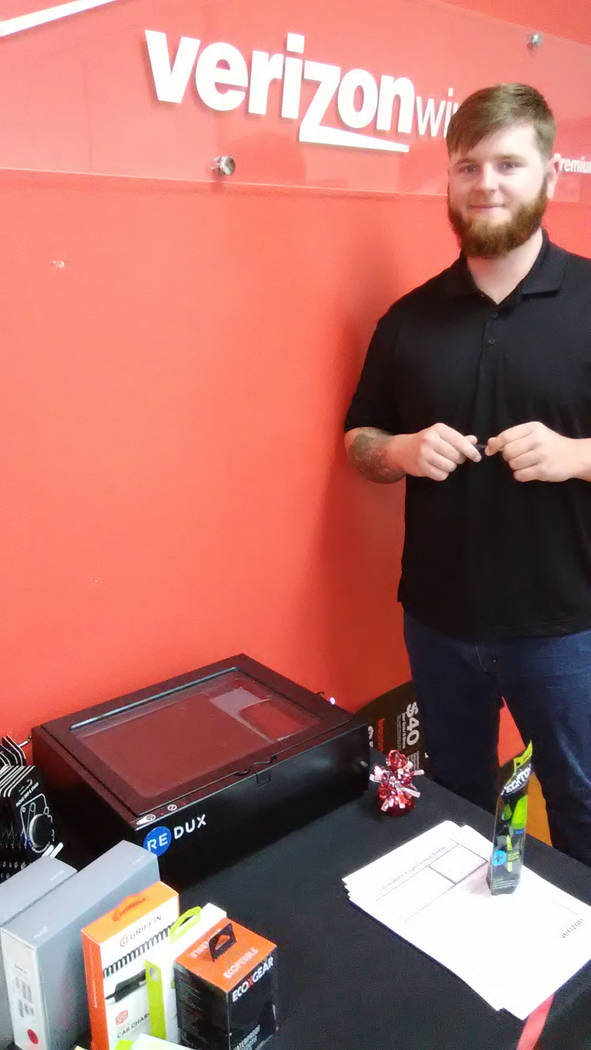 Selwyn Harris/Pahrump Valley Times Verizon A Wireless Assistant Manager Cody Anderson stands alongside the Redux device, which has proven to revive cell phones and similar devices that have been submerged in water and other liquids. The process normally takes less than an hour. 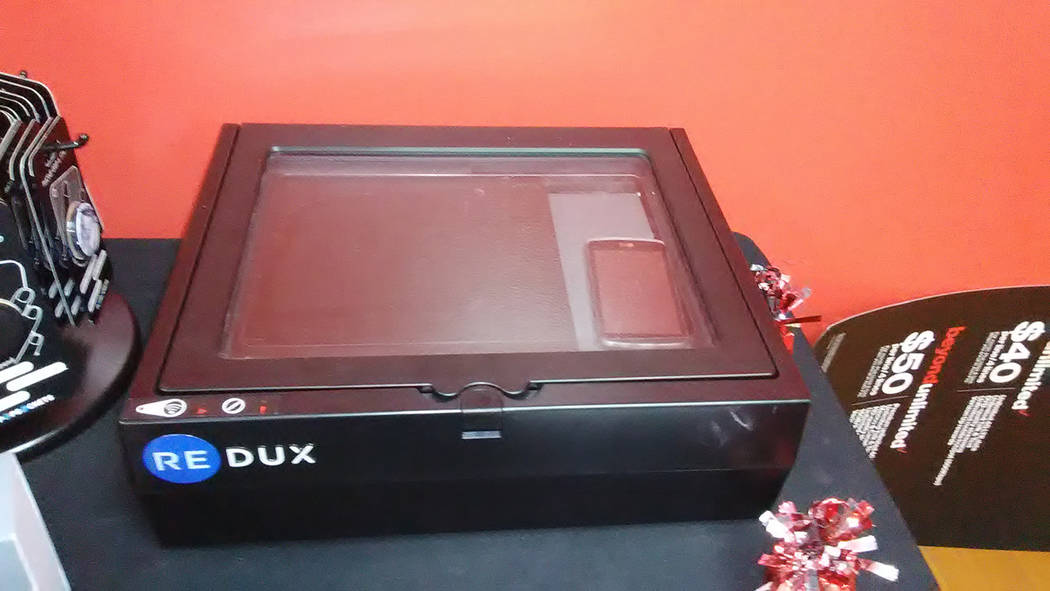 It is vital for all known forms of life on earth, but the transparent and nearly colorless chemical substance known as “water” is a known killer of cell phones and other similar devices.

As a result, a brand new device called “Redux” can revive a dunked device by removing moisture from liquid-damaged devices, thus returning them to working condition, according to Reuben Zielinski, co-founder of Redux.

“Most people think their phone is fried when it gets wet, and that’s not always the case,” Zielinski said. “Redux removes 100 percent of the moisture from wet electronics, allowing many mobile device users to recover their hardware investment and precious data.”

“It’s essentially a vacuum chamber, where you insert your phone and the chamber pressurizes it,” he said. “The more pressure it has on it, the more likely it will turn into a gas and expel it out of your phone as a gas, versus liquid, which is the whole concept behind it. We have completed a demo on it, but when it first started out, there were some issues with it, but they’re all rectified now. The company claims an 80 percent success rate. I’m not sure how long it’s been on the market, but we have had it in our store for roughly three months.”

A news release from the company states that the Redux revival process has been successful in recovering devices damaged by many perils, including toilet water, soapy washing machines, puddles, mud, tomato soup, beer, wine and more.

Anderson noted that prior to the new technology, the common thought was to place the phone in a bowl of rice.

“This device is much, much more effective,” he said. “A lot of phone companies claim that their phones are water resistant, but the O-rings in the phones, especially here in the desert, can dry out over time. You should never try to put it in rice or charge it. This is not just designed for phones. It also works on tablets, Bluetooth headsets, or laptops.”

Redux customers pay a non-refundable diagnostic fee of $10 to attempt the revival process.

The cost for a successful recovery of a basic phone or a data device is $50, while a smartphone, tablet or wearable is $90, the company noted.

A discount is provided to customers who have a monthly device insurance offered by the wireless service provider.

“We don’t sell the device, so folks need to bring their phones here,” Anderson said. “We just sign them up for a membership for it. You pay one-time fee of $29.99 and you’re covered for two years.”

John Stratton, CEO of A Wireless said the company is excited to partner with Revive Electronics and offer the Redux technology to customers.

“This partnership not only allows us to save our customers money by eliminating the cost to replace entire devices, but also enables them to recover their data, and save potentially irreplaceable information, such as contacts, photos, videos and more.”

To help obtain a successful recovery, customers are encouraged not to plug the device in, but turn it off immediately and remove the battery, if possible.

For devices in which users cannot remove the battery, the battery’s state of charge may play a factor in the phone’s ability to be revived.

The drying process typically takes less than one hour.

Redux was inspired by co-founder Joel Trusty, whose wife accidentally subjected her cell phone to a full cycle in the washing machine and was devastated that not only was the phone ruined, but all the data, contact information, photos and videos were lost.

With a background in manufacturing, Trusty had an idea for how to save his wife’s phone and knew that his friend and neighbor, Zielinski, an ex-IBM employee, had the equipment to put his idea into practice.

Together, they fixed the phone, and within one week created the first Redux model.