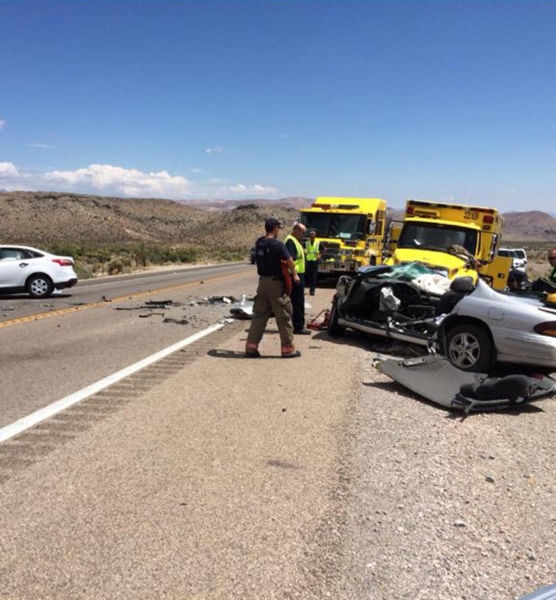 Nevada Highway Patrol was out in numbers on a dangerous stretch of Highway 160 regulating drivers on the road linking Las Vegas and Pahrump.

State troopers were out in full force from July 22 through Aug. 7 on areas of Highway 160 on both sides of the hump, handing out tickets to law-bending drivers.

There were a total of 428 traffic stops resulting in 328 citations for speeding, 21 tickets issued for hazardous moving violations, and 36 motorist assists, according the the Highway Patrol.

A total of 231 man hours were spent by NHP troopers during the over two-week operation.

July 30 yielded the most tickets and activity in a single day during the saturation, as troopers handed out 52 tickets in 72 contacts, with seven stops the result of assisting a motorist.

Trooper Chelsea Stuenkel said the Highway Patrol routinely concentrates on spots that have heightened attention on them.

In a five-year crash study, the Nevada Department of Transportation found that the stretch of road between mile marker 11 and mile marker 22 saw an average crash rate almost double the rate for the average NDOT maintained rural principal arterial.

Two crashes involving motorcycles occurred in the last two weeks, as two people were injured when an automobile sideswiped them when it drifted into their lane, one critically on Aug. 7 and a single motorcycle accident occurred on Aug. 11, sending one man to UMC with serious injuries.

Also, last month a crash at mile marker 16 took the life of a 61-year-old Henderson man, as the vehicle he was a passenger in was traveling eastbound and was struck head-on by a vehicle driven by a 24-year-old female traveling in the westbound lane while she attempted to pass a slower vehicle.

A long-term solution aimed at making the stretch of road safer is in the works, as NDOT said that a $30 million improvement project is scheduled to widen a 5-mile section of state Route 160 between mile markers 11 and 16, from the state Route 159 interchange to just before Mountain Springs.

The project, which will widen the area from two to four lanes, should break ground early next year and is planned to be completed in the early months of 2017.