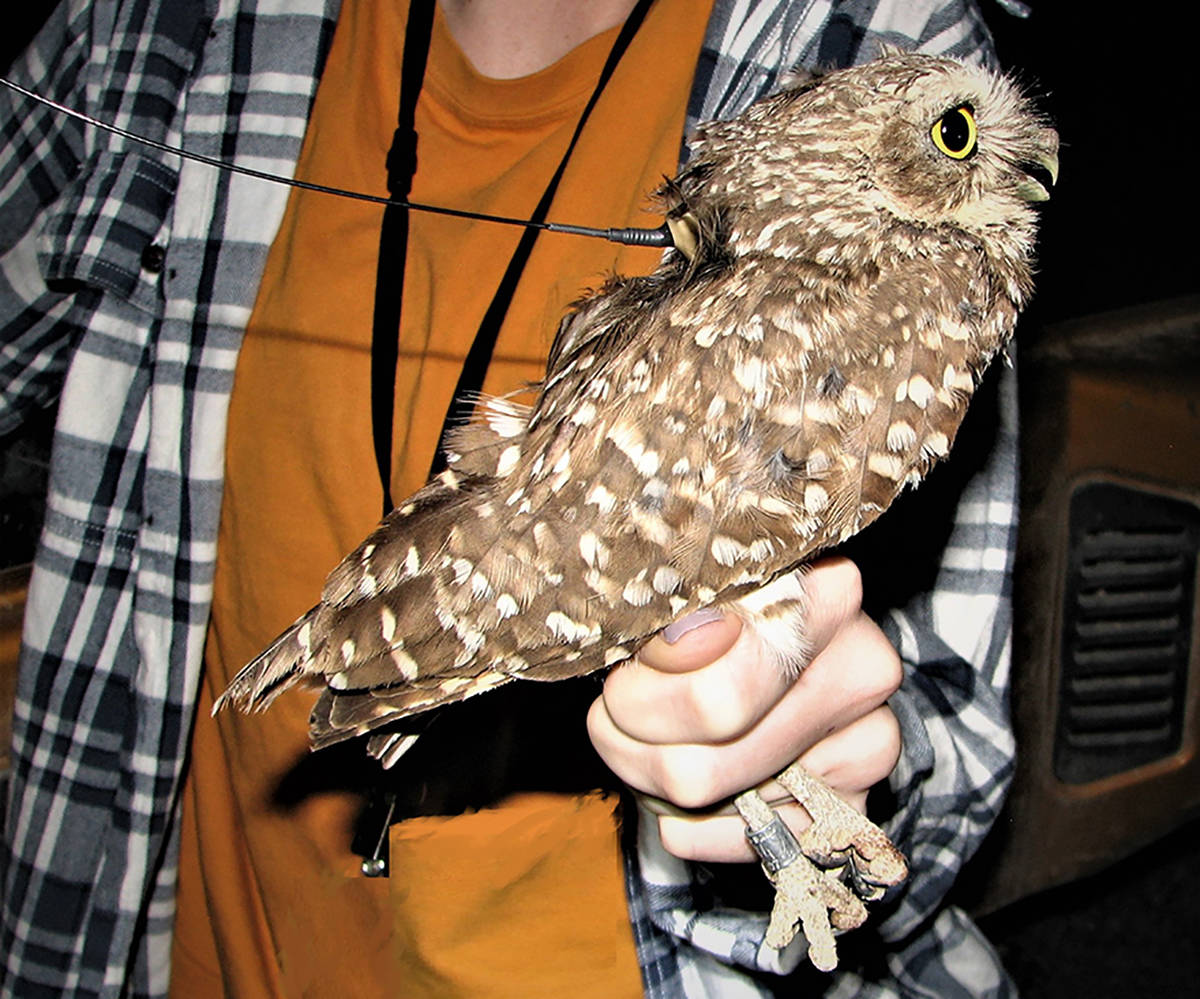 Special to the Pahrump Valley Times Each owl in the study by Nevada National Security Site biologists was fitted with a satellite-trackable transmitter, powered by a tiny solar panel.

A submission by NNSS biologists Derek Hall and Jeanette Perry titled “Burrowing Owl and Winter Raptor Monitoring on the Nevada National Security Site” has been named one of three finalists for the Council for the Conservation of Migratory Birds’ Presidential Awards.

“I was aware of these awards and thought, ‘Let’s give it a shot,’ ” said Hall, who has “studied everything from mosquitoes to mountain lions” since joining the NNSS in 1994.

As the NNSS moves forward on vitally important mission work, it is NNSS biologists who, with an eye toward environmental impact, help lay the groundwork. Before any new project begins at the site, NNSS biologists do a survey to determine what could be affected and how to mitigate the loss of important plant and wildlife resources.

“We’ve been doing some great work for many years,” Hall said. “It’s nice to receive some national recognition for our findings.”

Recognizing federal stewardship and migratory bird conservation projects from throughout the United States, the awards will take place virtually during the next annual council meeting in 2021. Nominees will present their projects at the meeting, and a winner will be selected by the council, made up of several federal agencies.

The NNSS submission includes two studies, one on burrowing owls and one on winter raptors.

Each owl in the study was equipped with a satellite-trackable transmitter, powered by a tiny solar panel. This portion of the NNSS submission builds upon research that began in 1995. At that time, burrowing owls were listed as a candidate species for the Endangered Species Act. Essentially, their populations were declining in many parts of their range but not enough information was available to explain why.

Hall launched an exhaustive study, visiting known burrows and searching for new ones. The team installed motion-activated cameras and temperature probes at burrow sites and studied regurgitated pellets to learn more about what they were eating. The resulting published report detailed the owls’ food habits, burrow use, reproduction and activity patterns, all information that allows the NNSS to identify the disturbance impact of proposed work.

Wanting to know where the site’s burrowing owls wintered, in June 2019 Hall equipped seven owls with satellite-trackable transmitters, each powered by a tiny solar panel.

“When putting on a transmitter, you have to be careful. You don’t want to impact the bird’s ability to fly and hunt,” Hall said, adding that trackers can weigh no more than 5% of a bird’s body weight.

With that in mind, the transmitters used in Hall’s study weigh in at just 5 grams.

Of the seven owls, three wintered in Mexico’s Baja Peninsula and three in Southern California. The seventh owl is thought to have wintered on-site.

The birds who traveled elsewhere all made it to their destination within two to three weeks, and the satellite transmitters allowed Hall to document their migration routes. Of the six who left, one male returned to the site, within a mile of his home the previous summer. He mated with a different female than last year, and they had five chicks. One of the other six continues to call Nevada home as well and is currently residing just northeast of Tonopah.

Two of the seven transmitters are still functioning, and Hall hopes to purchase another six to repeat the study in June.

The winter raptor study lays the foundation for learning about climate change through studying bird migratory habits. Biologists currently hypothesize that as the earth continues to warm, an increasing number of southern birds will be seen in northern areas to which they never previously would have migrated.

The NNSS partnered with the Nevada Department of Wildlife in 2014 to build upon work NDOW had been doing since 1994 to study declining raptor populations.

“Nevada is a great place for raptors to winter,” Hall said. “It’s warmer, there’s little snow cover, and there’s plenty for them to eat.”

The golden eagle, which is protected by the Migratory Bird Treaty and the Bald and Golden Eagle Protection Act, is also of great interest to many federal and state agencies. The U.S. Army Corps of Engineers sponsors winter counts of bald eagles and golden eagles throughout the United States, so the NNSS data feeds into that effort as well.

The interagency collaboration has yielded good data and established two new survey routes in an area with little known data due its inaccessibility to the public. The NNSS plans to continue this area of study for the foreseeable future.