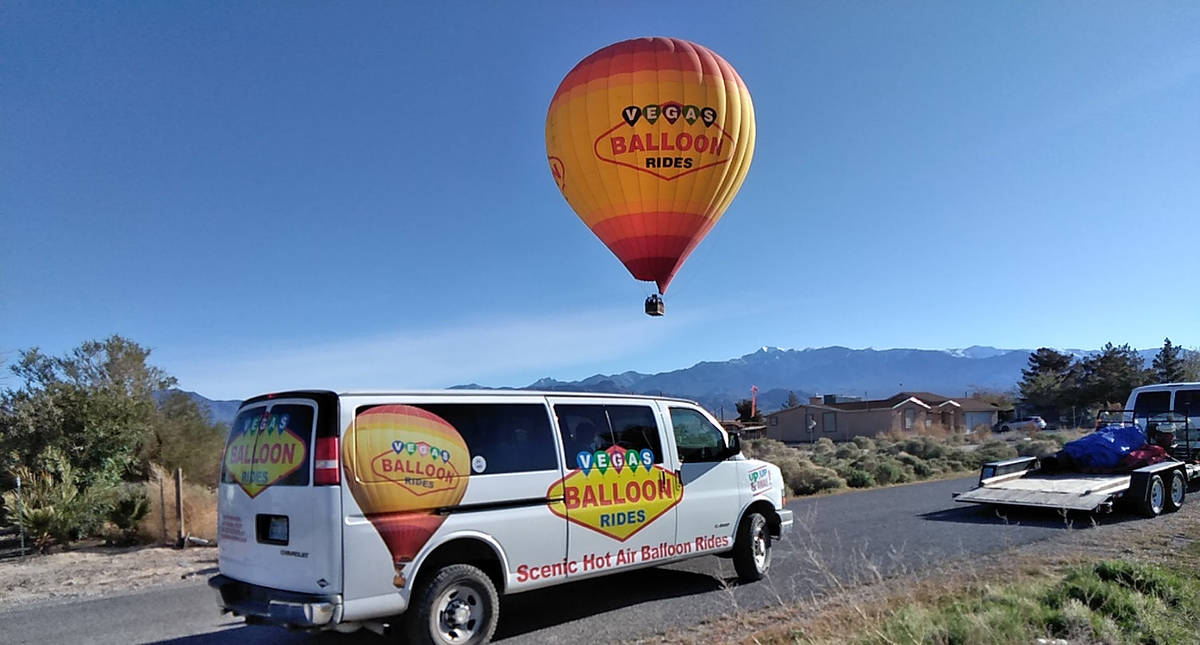 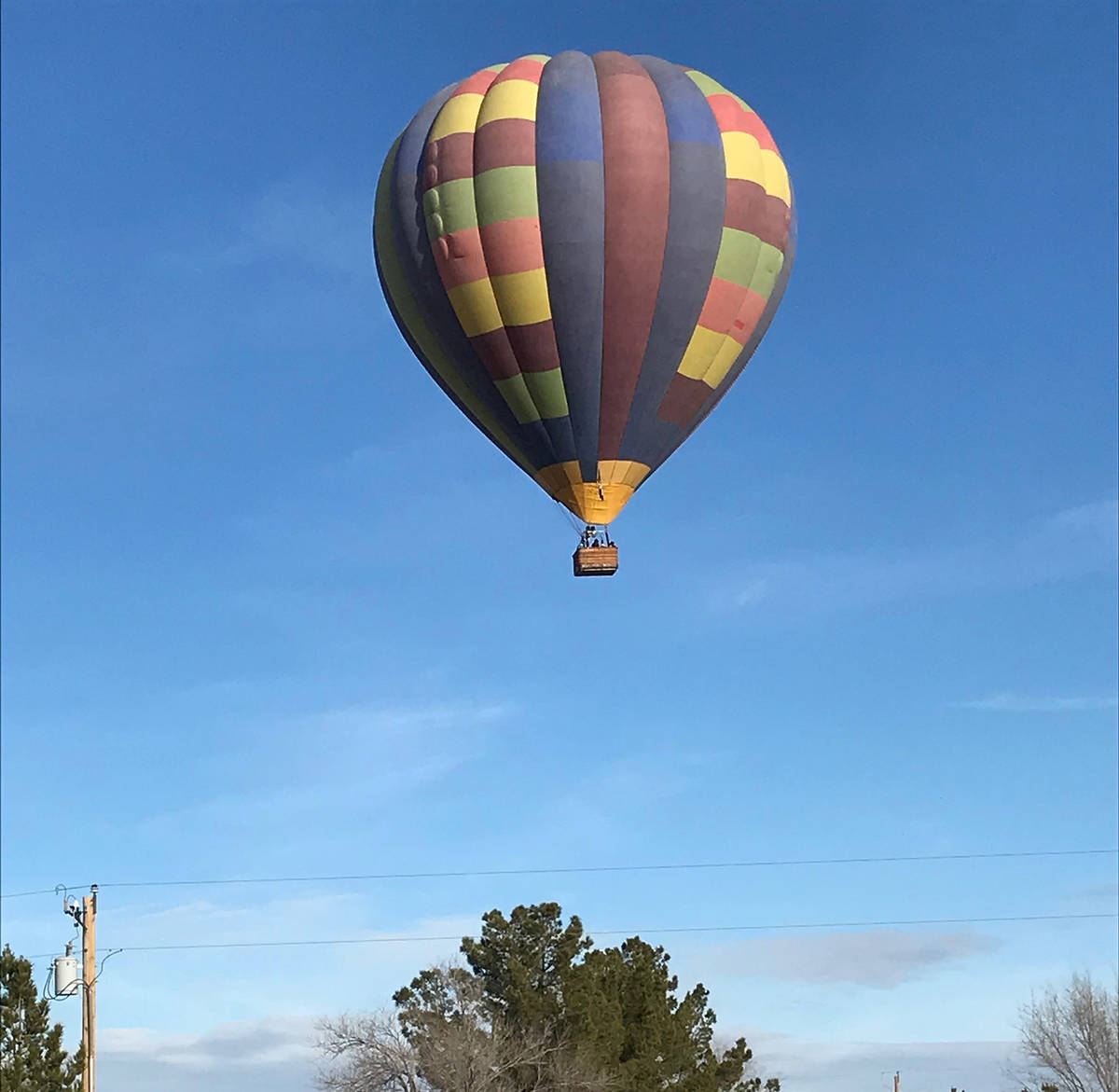 Whether finding them fascinating or frightening, everyone seems to have an opinion on hot air balloons and for several Pahrump locals, they have recently become a big problem.

While most residents may not have an issue with these hot air craft as they drift high above the town, when the balloons begin to approach too close to residential homes, or even land on private property, it can elicit fear, frustration, privacy concerns and allegations of property damage.

This was just the case for area property owners Maxine and Neil Levy, Deborah Lavoie and Susan and Robert Behrman.

Collectively, they put together a lengthy presentation outlining their experience with balloon companies that have been flying locally, complete with photos of the aircraft flying low over and landing in their neighborhoods. The Behrmans also provided a list of financial losses they attribute to the presence of hot air balloons over their home, with devalued horses, mini cows and goats along with lost wages included. The obviously frustrated residents went before the Nye County Commission during its Oct. 20 meeting with a request for the county to create an ordinance that would put an end to their vexation by regulating the operation of hot air balloons in the Pahrump Valley.

Nye County Commission Chairman John Koenig sponsored the agenda item, explaining for his fellow commissioners that he had decided rather than starting off by directing staff to draft an ordinance only to have the draft come before the board and possibly be voted down, he felt it would be more appropriate to gauge the appetite for such codes first, so that valuable staff time wouldn’t be wasted if commissioners were not interested in pursing that action.

“Again, there are positives and there are negatives,” Koenig stated. “When I look out my window and I see a balloon seemingly on my head, I get very upset. When I see them hovering over my neighbor’s house and there are dogs going crazy, I get upset. When I get email after email after email from upset citizens, I continue to get more upset. But they look nice at a distance, they look nice up in the air. If they weren’t down hovering over my house I probably wouldn’t mind them at all.”

Koenig added that of the two hot air balloon companies flying in Pahrump, only the out-of-town company, Vegas Balloon Rides, has proven to be a continual problem. Several months ago, he said he had meetings with both Vegas Balloon Rides and the local company, Balloons Over Pahrump, to discuss the complaints the county had been receiving and he had thought that the matter was resolved. However, complaints have continued to come in.

“Pahrump balloon (Balloons over Pahrump) has listened to the ladies and people’s complaints and Pahrump balloon now flies down this area of town and doesn’t bother the northern area. The other company, the out-of-town company, doesn’t seem to care what we think,” Koenig stated.

Nye County Commissioner Debra Strickland remarked that it is very difficult to regulate where exactly hot air balloons fly, as their paths are directed by wind patterns, but she thought it might be possible to create take-off and landing zones. She also noted that current Federal Aviation Administration laws already regulate the minimum height at which balloons are supposed to fly, although those laws are not always adhered to and are apparently sometimes not enforced.

Commissioner Leo Blundo homed in on existing FAA laws as well, drawing attention to the fact that Nye County Code Compliance had filed an FAA complaint on behalf of the homeowners who had requested the item. He asked if the county was looking to mirror some of the FAA regulations.

“We’ve looked into this on a very superficial and preliminary basis and it was appropriate to go to the FAA because once the balloon gets airborne, they are pretty much the ones (that handle regulations),” Nye County District Attorney Chris Arabia stated. “But Clark County does have some limited requirements… and what we were thinking was, we’d be perfectly willing to look into that a little bit more closely and then maybe make some recommendations about ways to maybe achieve the objectives, in light of the fact that the FAA covers them once they are off the ground but when they are on the ground, that’s not the case.”

Nye County Deputy District Attorney Brad Richardson chimed in as well, telling commissioners, “I know the FAA has some regulations but they are not enforcing them out here. If we had a county code that had some similar, and not contradictory, regulations like, no lower than 1,000 feet over a congested area and we had a county ordinance that said the same thing, we could enforce it. That’d be kind of what we’d look at.”

The only comment commissioner Lorinda Wichman had to make was to emphasize that if the county does decide to move forward with an ordinance, she would like it to be isolated to the Pahrump Regional Planning District. “Because we have a lot of hot air balloon pilots out here who have been flying out here for 15 years with never a problem and no complaints and I’d hate to put restrictions on them,” Wichman stated. Koenig said it was his intention to limit any potential ordinance to the Pahrump Valley only.

“Don’t get me wrong, I don’t want some overbearing ordinance on this,” Koenig said as the item drew to a close. “I want something that tells these people to stay up in the air when they are flying over people’s homes… and try and land in areas where there are no homes. That’s pretty simple.”

Staff was directed to bring ideas for possible code language back to the commission for consideration, after which, if commissioners were in agreement, the county would begin the process of drafting an actual ordinance.

Any new ordinance would then have to be scheduled for a public hearing before it could be approved.

To view the presentation materials as submitted by the Levys, Behrmans and Lavoie visit www.NyeCounty.net and click on the “Meeting Center” link. The information is included with item #33 in the Oct. 20 commission agenda.