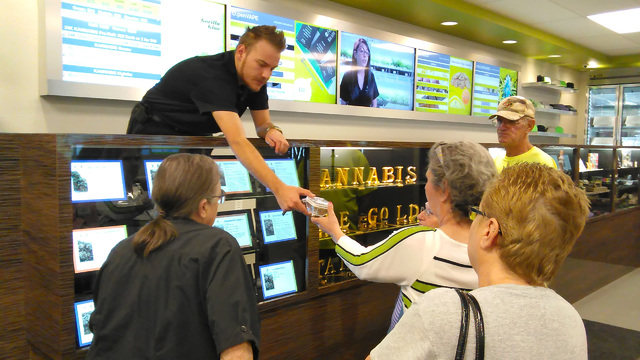 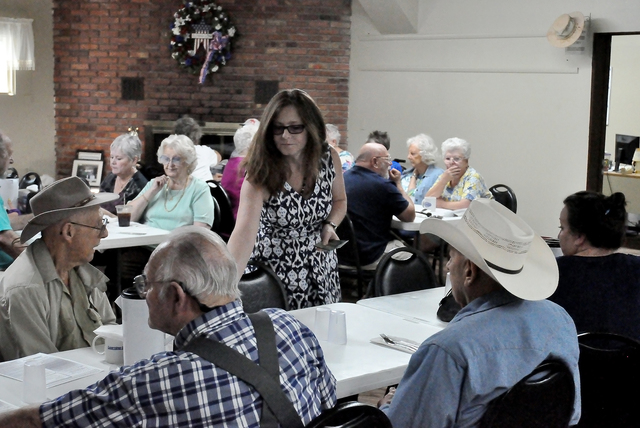 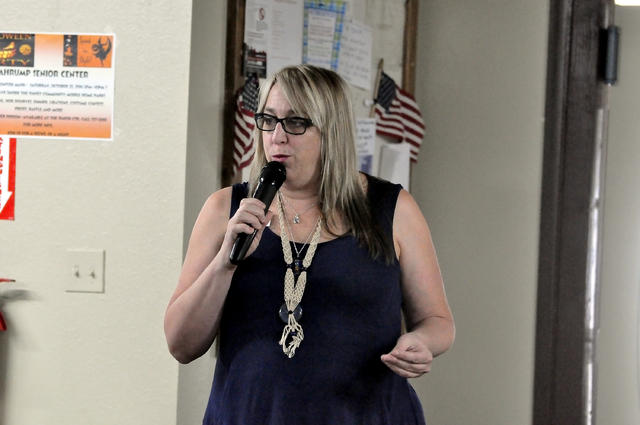 Horace Langford Jr./Pahrump Valley Times Julie Monteiro, a registered nurse who is known as "Nurse Juhlzie," holds an educational event on medical marijuana in Pahrump recently. Nye County ranks first in Nevada in for the most medical marijuana patient cards per capita issued.

Nye County is leading Nevada in medical marijuana cards per capita, according to the Nevada Division of Public and Behavioral Health.

There were 18.7 medical marijuana cards per 1,000 residents in Nye County as of September, the largest number in the state, according to the Las Vegas Medical Marijuana Association, a chamber of commerce for medical marijuana that promotes its use in Nevada.

John Laub, president of the Las Vegas Medical Marijuana Association, said the organization is seeing an increase of about 1,000 medical marijuana cards per month in Nevada.

“It’s a result mostly from awareness through articles, ads and word-of-mouth,” Laub said. “I believe that people are also researching medical marijuana to see if it will help with pain, lack of sleep and the nausea associated with chemotherapy.”

Nye County currently has one dispensary and several cultivation facilities.

On Nov.8, a measure to legalize recreational use of marijuana will be on the ballot in Nevada, California, Arizona, Massachusetts and Maine.

The poll of 800 likely Nevada voters released by the Las Vegas Review-Journal showed a split, with 47 percent saying they would vote “yes” on Question 2 on the Nov. 8 ballot, 46 percent opposing the measure, and 7 percent remaining undecided.

“If Question 2 passes, it will help take some of the stigma off of medical marijuana. It will definitely help the businesses. Currently, there is not enough of a market to support the industry,” he said.

In Pahrump, several medical marijuana businesses previously said they were optimistic about the ratification of recreational marijuana.

Philip Restifo, of Green Cross of America, Inc., who plans to open his medical marijuana cultivation facility in mid-November, expressed hopes that recreational marijuana will get ratified on Nov. 8.

“And once it passes the state for recreational, we are already looking at expanding to another facility,” Restifo told the Pahrump Valley Times.

Julie Monteiro, a registered nurse who is known as “Nurse Juhlzie” held an educational talk in Pahrump about the benefits of medical marijuana.

“The process of getting your NV-MMP (Nevada Medical Marijuana Program) Card is now an easy process. It used to take up to three months to obtain your legal state card and now a patient can obtain it within almost 24-to-48 hours by the state online system or by applying in person at a dispensary. This is now similar to surrounding states like California, where a patient can obtain a state medical cannabis card and receive it on the same day,” she said.

Some of the qualifying conditions for medical marijuana cards in Nevada are cancer, glaucoma, seizures, including epilepsy, muscle spasms, severe pain and nausea and PTSD and AIDS.

To get a medical marijuana card, one person needs to register online and get an application and have their doctor sign off to prove that they have one of the qualifying conditions.

Applying, paying and getting a medical marijuana approval now can be done through MMP’s online registry, Laub said.

Nevada voted medical cannabis into law in 2001, but the state passed legislation for legal dispensaries only in 2013.

“Now that dispensaries are widely available throughout the state and the medical cannabis program is becoming more familiar and known to its citizens as a safe method of treatment, many are applying for their NV-MMP cards,” Monteiro said.

While Nye County is first in per capita, its 803 is the third largest number of cards, even though the county ranks seventh in population, including Carson City. Clark County, obviously, leads the way with 16,318 cards, while Washoe has 3,624 cards.

Fifty-seven percent or 13,326 of them are over 45, and that the number is up by 625 cardholders, according to the Las Vegas Medical Marijuana Association. The largest group, 5,187, are card holders between 55 and 64 years of age.

“It’s probably the stigma of drugs that keeps people from trying medical marijuana to see if it will work,” Laub said. “Maybe if some of the barriers are removed, such as getting a card, people will try it.”