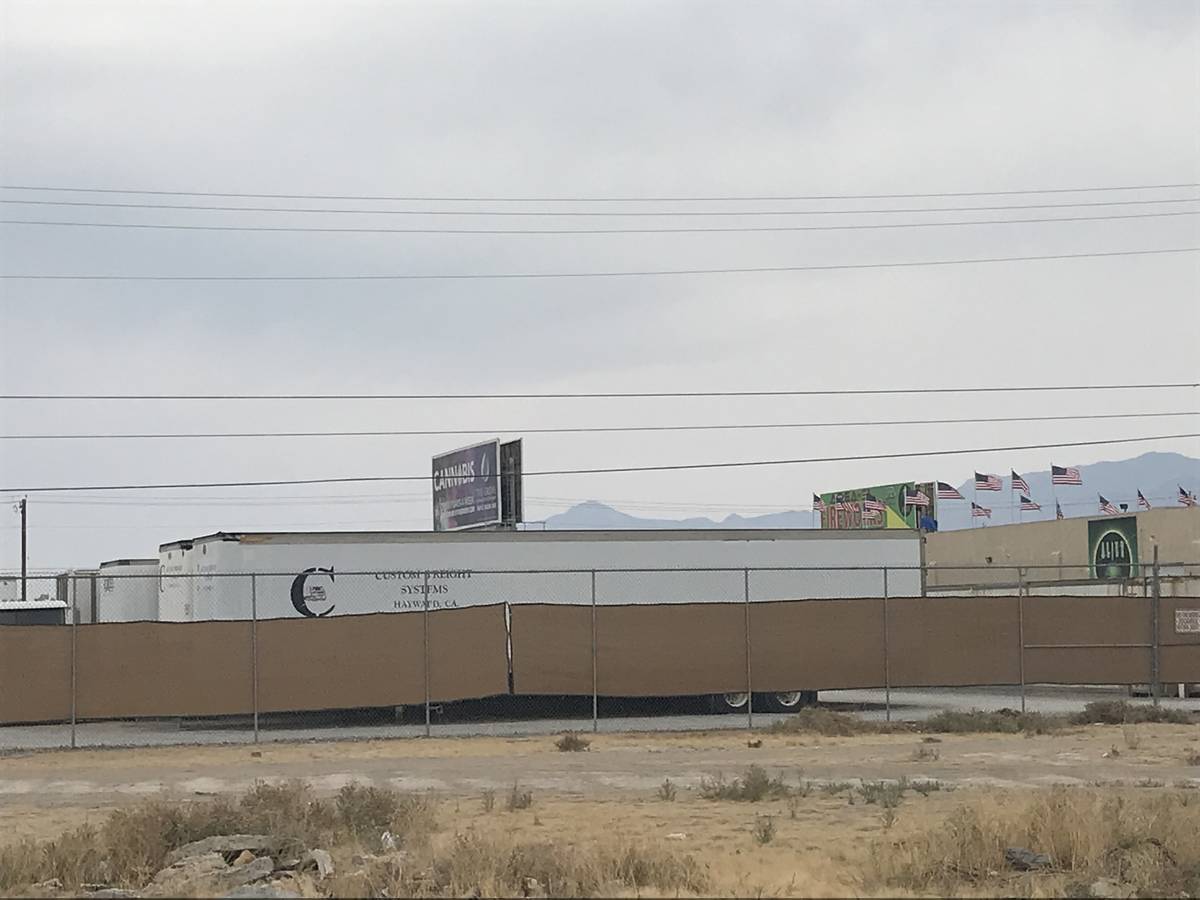 Robin Hebrock/Pahrump Valley Times All of the metal containers, such as the ones pictured here, that are used by local fireworks stores must be removed or moved into a warehouse as stipulated by the terms of their individual conditional use permits. 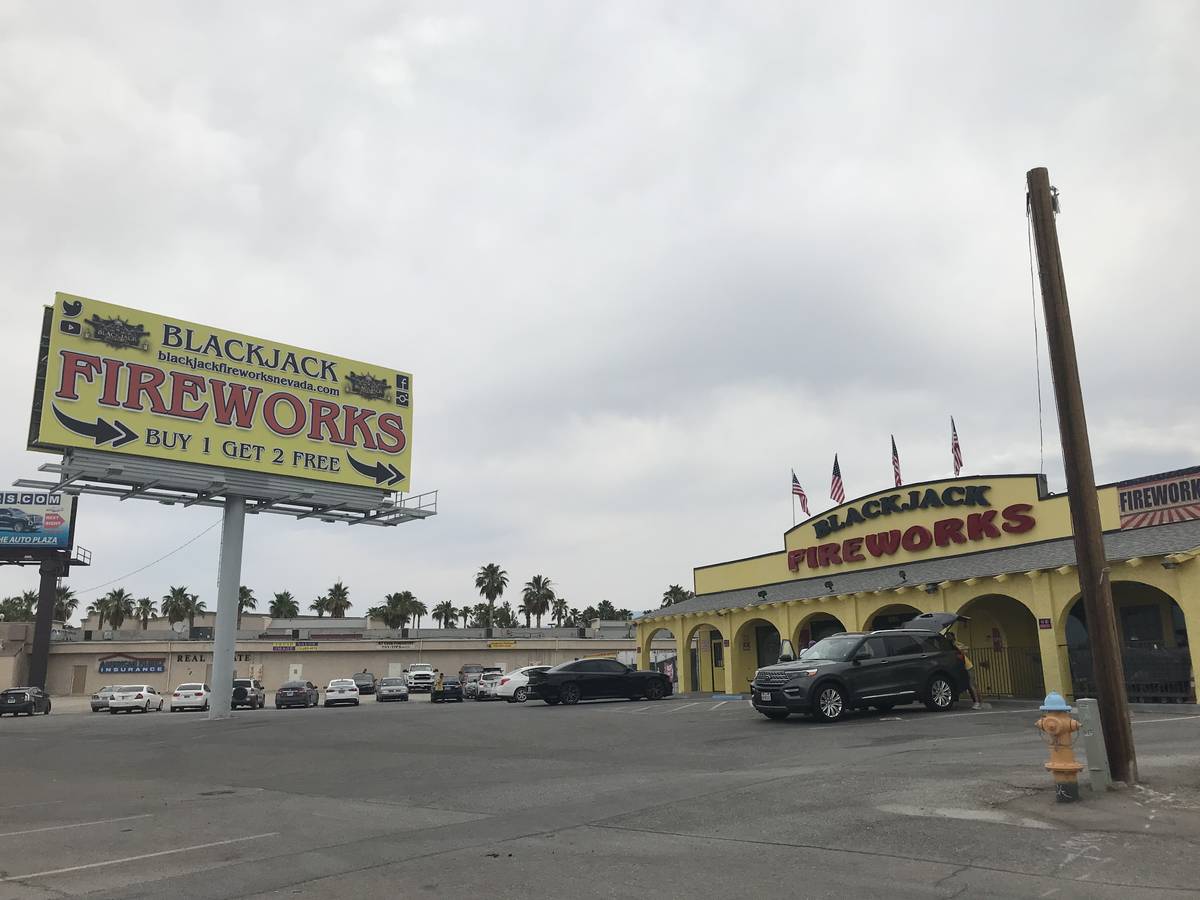 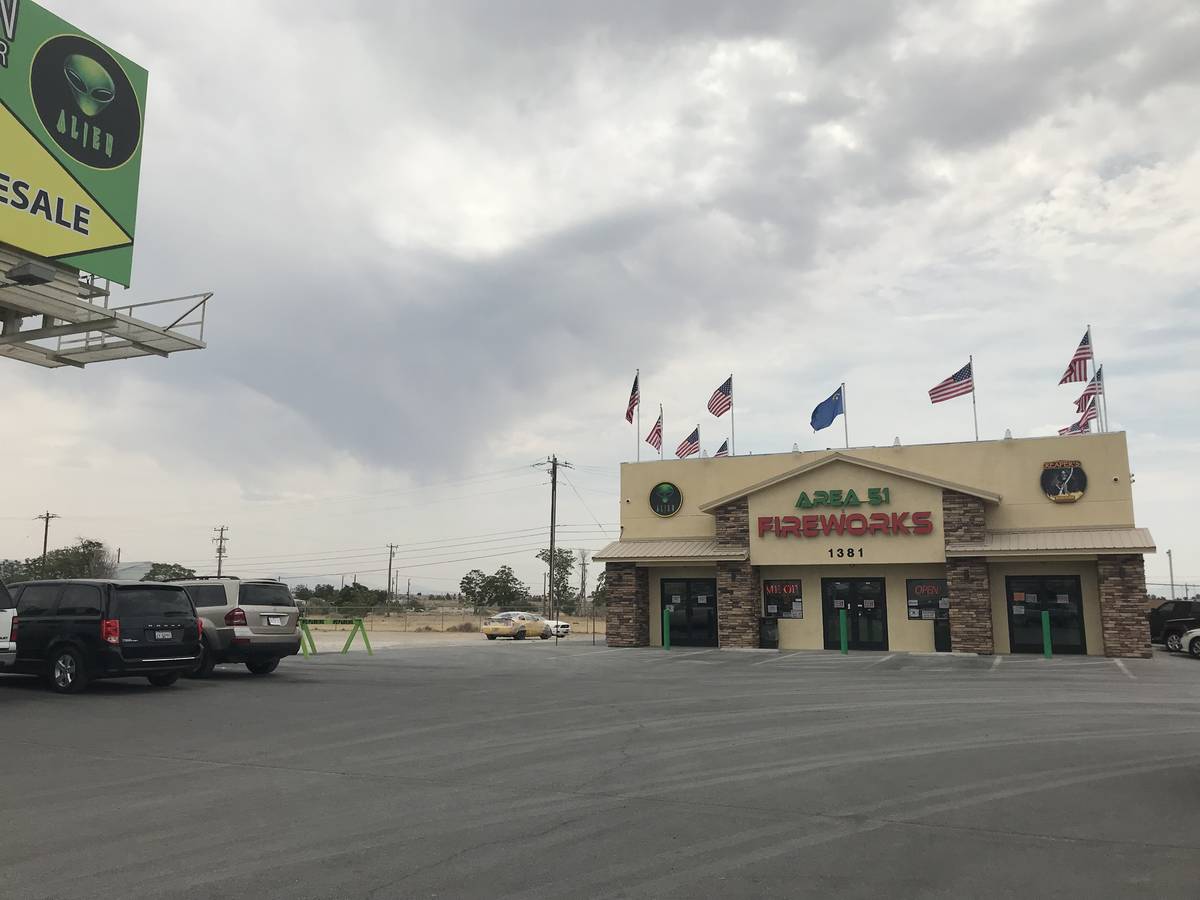 Robin Hebrock/Pahrump Valley Times Pictured is the Area 51 Fireworks store in Pahrump. The store is located at 1381 S. Highway 372 in Pahrump.

Local fireworks stores are being put on notice by Nye County officials, who emphasized during the most recent Nye County Commission meeting that those store owners must take action to build warehouses to store their fireworks inventory and then remove the metal storage containers located at their retail stores, as dictated by the “sunset clause” outlined in their Conditional Use Permits.

For many years, fireworks retailers have been keeping their inventory inside of metal shipping containers, commonly referred to as conex boxes, which allows for centralized storage and ease of restocking shelves during periods of high volume purchasing, but this practice is something that Nye County officials are not at all pleased with.

As such, roughly two years ago, the Pahrump Regional Planning Commission placed a sunset clause in the Conditional Use Permits required to operate said fireworks establishments which stipulates that by a specified date, the owners must obtain approval of a site development plan and begin construction of a permanent building to warehouse their products. Those sunset dates, which vary depending on the company involved, are looming ever closer, with less than a year for three of the valley’s fireworks stores to meet the warehousing requirement.

“I want to bring this up for each and every one of these applications,” Nye County Commission Chair Debra Strickland stated as the commissioners were poised to address a series of fireworks permit renewals on Tuesday, June 15. “For this particular approval for renewal (Blackjack Fireworks) I want to point out that Nye County Planning (Regional Planning Commission) on April 2, 2019, approved this with the (stipulation that) the Conditional Use Permit shall automatically expire and become null and void without further action three years following this conditional approval. So that three years is looking a lot like April 2 of next year. These guys need to be under construction, they need to be having their businesses get ready, because this is what they were told to do.”

While this seems to be quite clear, Nye County Commissioner Frank Carbone said the problem the county was facing at that moment was the fact that Blackjack Fireworks and Area 51 Fireworks, which are under related ownership, have indicated that they will not be able to remove all of their metal containers, even after building a brand new warehouse.

“During the last RPC (Regional Planning Commission) meeting on Wednesday (June 9) it was discussed that the probability that the organization of both Area 51 and Blackjack may not be able to move all of their containers into their new facilities. So in virtue, that gives us a problem with at least Area 51’s property, because those items will not be removed. Only about three-quarters will be removed, I believe that they said about 30 containers will still be there. So that actually voids the original requirements that they all be moved…” Carbone explained.

Nye County Commissioner Bruce Jabbour, who first disclosed that he works with and for Michael Lach, who owns a property located very near to Area 51 Fireworks, tore into that company for what he felt was its lack of willingness to comply with the county’s desires.

“This has been going on for years, as far as Area 51 on Highway 372… So how long are we going to allow the dance to happen?” Jabbour demanded to know. He said he was frustrated by the issue and he himself would recommend that the county just let Area 51’s fireworks permit to expire this June.

Nye County Commissioner Leo Blundo, on the other hand, defended the companies, asserting that they had been in operation before a lot of the county codes were established and emphasizing that Nye County reaps benefits from the fireworks stores via sale taxes and the issuance of Pahrump Fireworks Shooter Site permits that every customer is required to obtain when purchasing fireworks. “Let’s not look a gift-horse in the mouth,” Blundo said. “Let’s respectfully try to find a reasonable solution for all parties.”

Nye County Planning Director Brett Waggoner then clarified that though the companies had been operating prior to certain county codes going into effect, they were not grandfathered for the use of metal containers. Carbone also added that his main point that afternoon was only to ensure that all the companies are made to understand that they must comply with the CUP conditions or they will lose their permits to sell.

“Even if we approve the (permit renewals) the way they are, it needs to be understood that there was a requirement placed on them, they have a CUP, they went through the process… We should make them understand that we are not standing for them to not follow through on their commitment,” Carbone declared.

Nye County Commissioner Donna Cox jumped in to ask what had initiated the issue in the first place, with Waggoner explaining that there had been a series of complaints by the public. In addition, he remarked, “Obviously, as the container situation has grown over the years, like I said, I literally, I swear to you, quit counting at 380 because I was like just, oh my God. And the way they are situated today, they don’t match the fire regulations from the state fire marshal, they have raised concerns with us.”

Waggoner said there are no adequate fire lanes to allow access by Pahrump Valley Fire and Rescue Service in the event of a fire and, “In order to address the cumulative concerns, that is why this was all brought forward.”

He did note that site development plans have been submitted by Blackjack Fireworks and Area 51 Fireworks, with their warehouse set to be 100,000 square feet, which should allow for enough space to house all of the companies’ metal containers. That warehouse, and all others built by local fireworks companies, will be required to have sprinkler systems installed to reduce the fire risk.

Following several more minutes of debate, each of the four fireworks store permits subject to a CUP sunset clause, including Blackjack, Area 51, Phantom and Red Apple, were approved for renewal, with Carbone noting that he would like to have staff send a letter to each of those companies that contains a reiteration of what was discussed that afternoon, to make certain that the owners, who were not present at the meeting, were aware of the county’s stance on the matter.