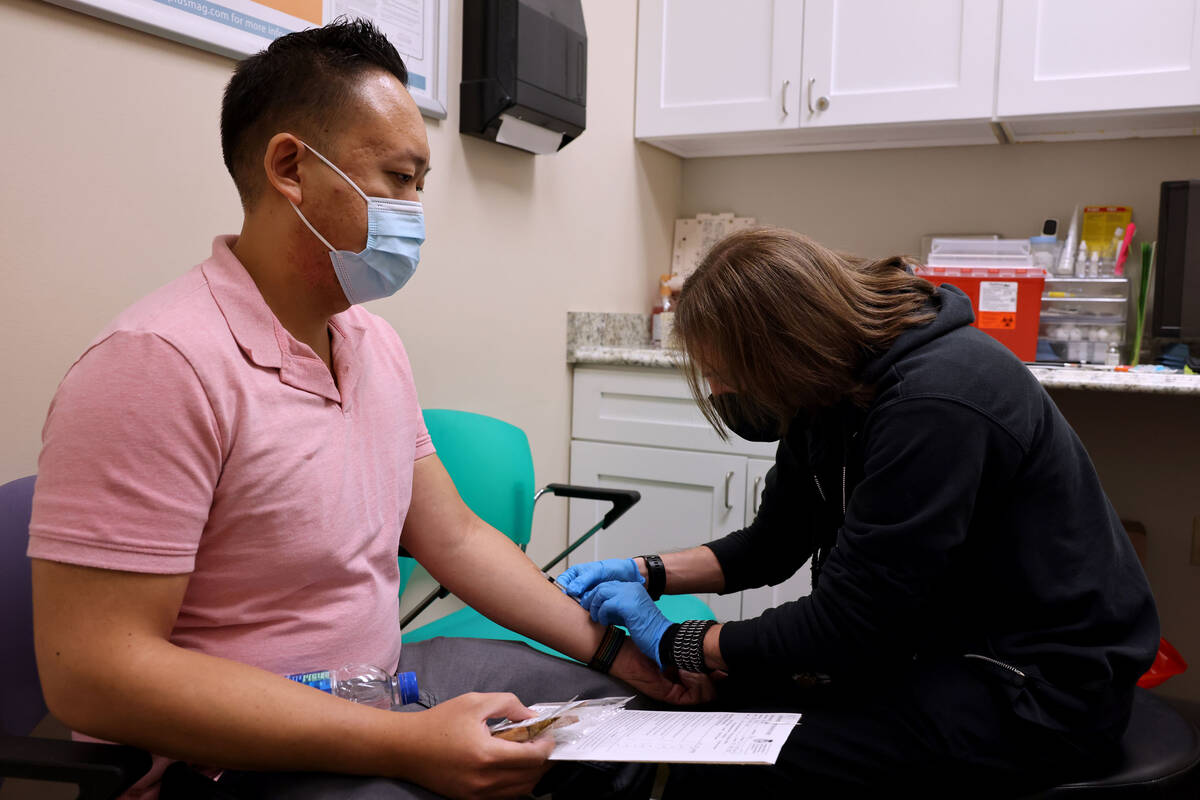 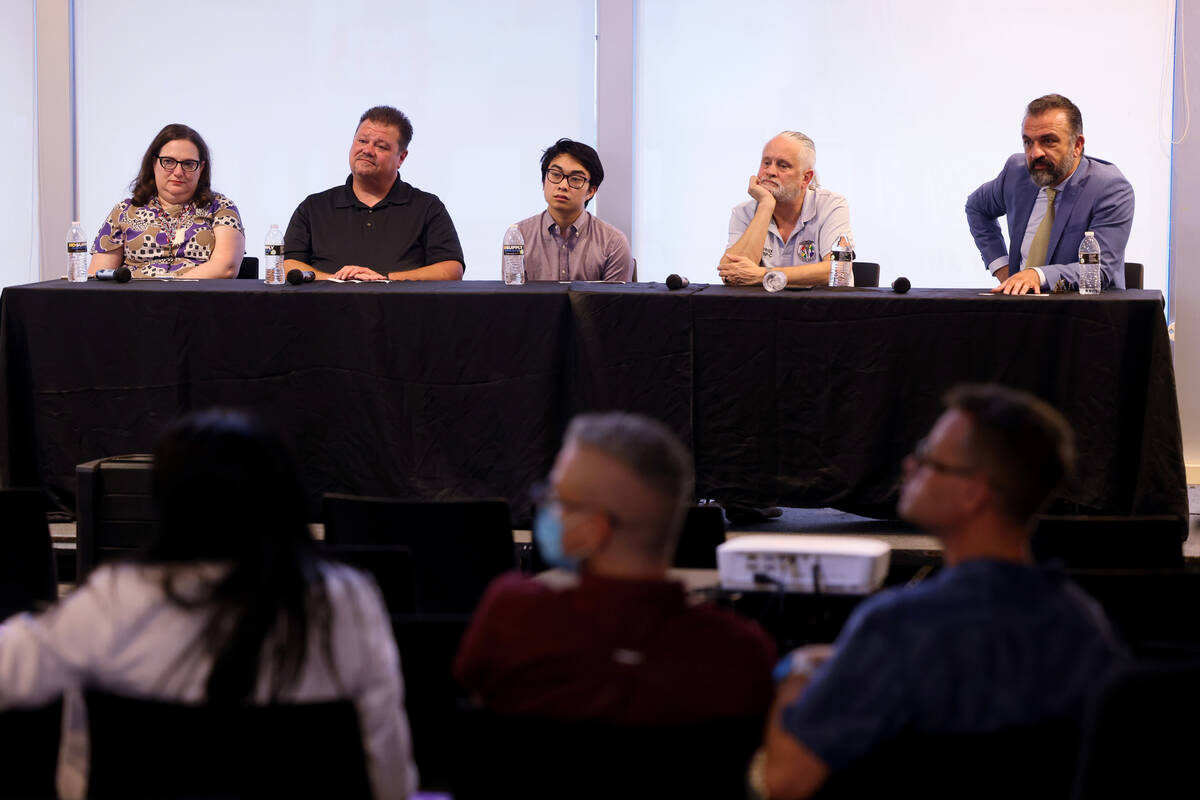 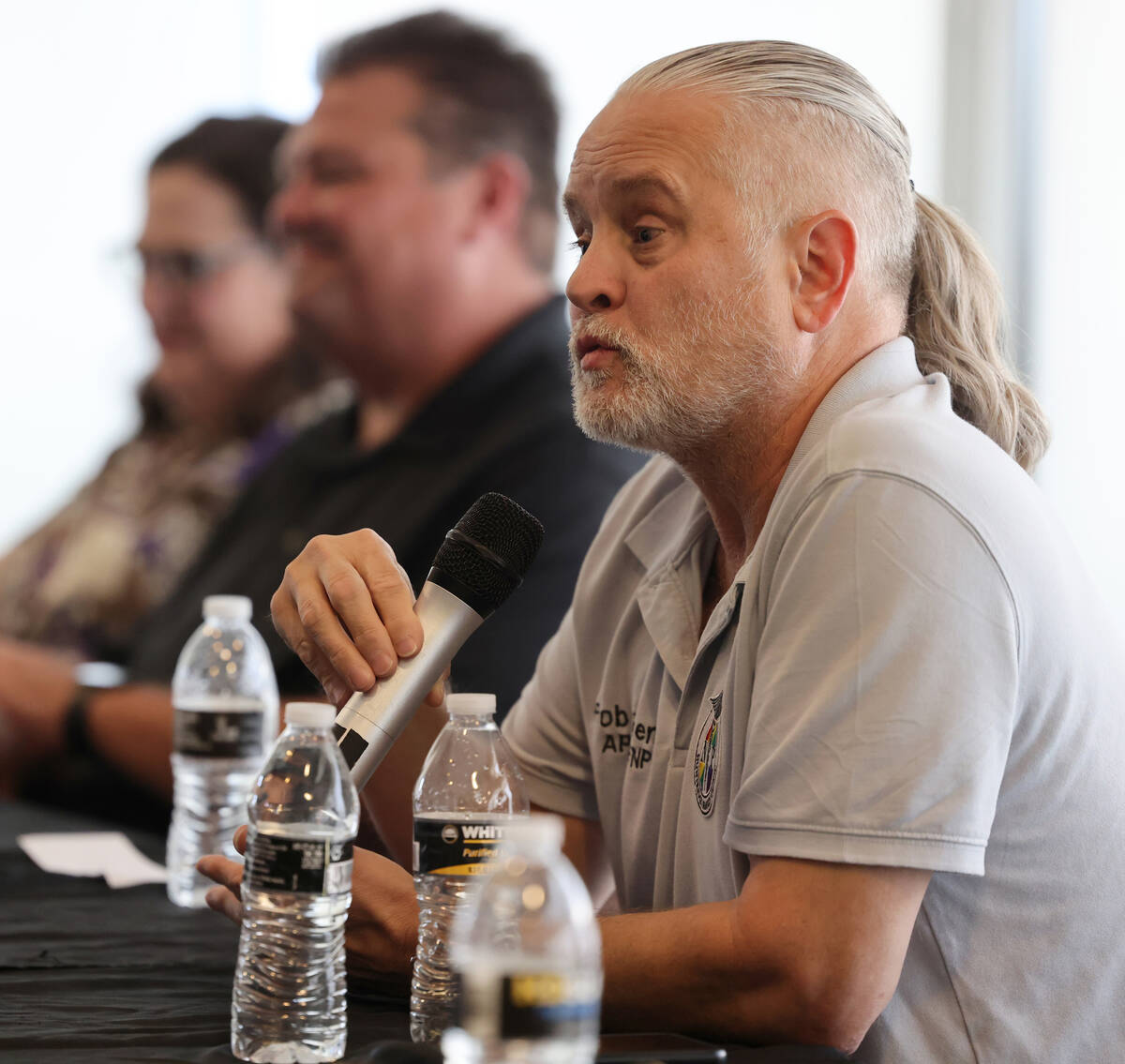 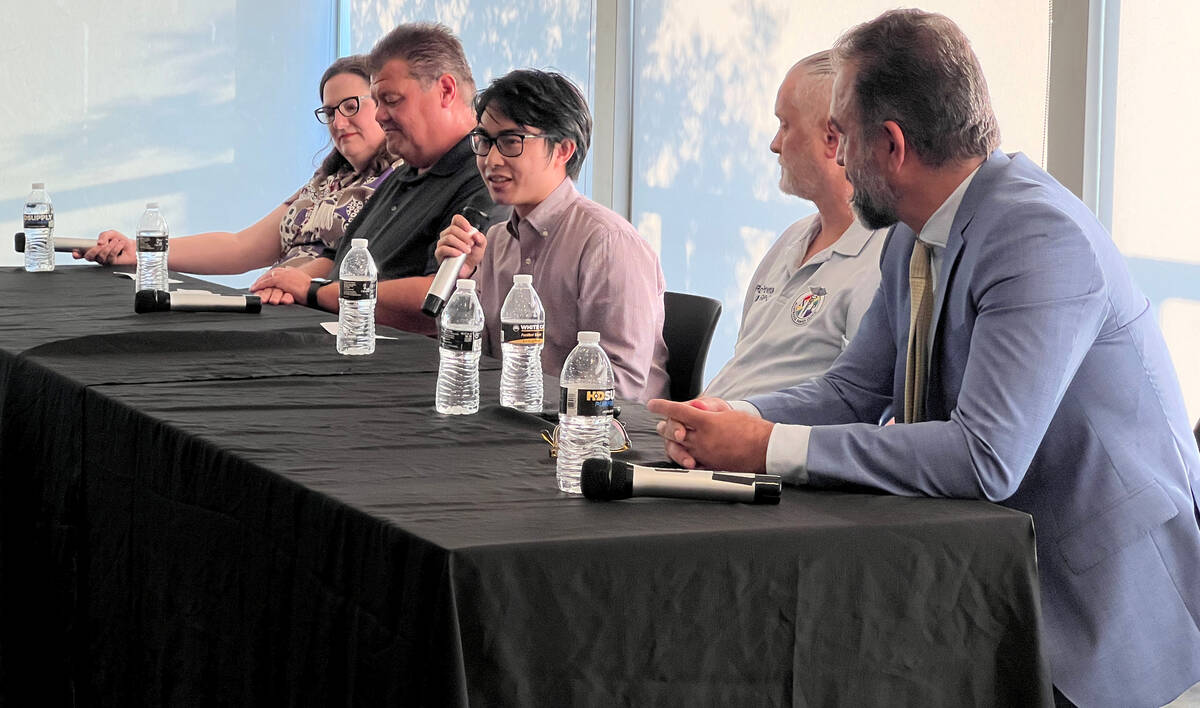 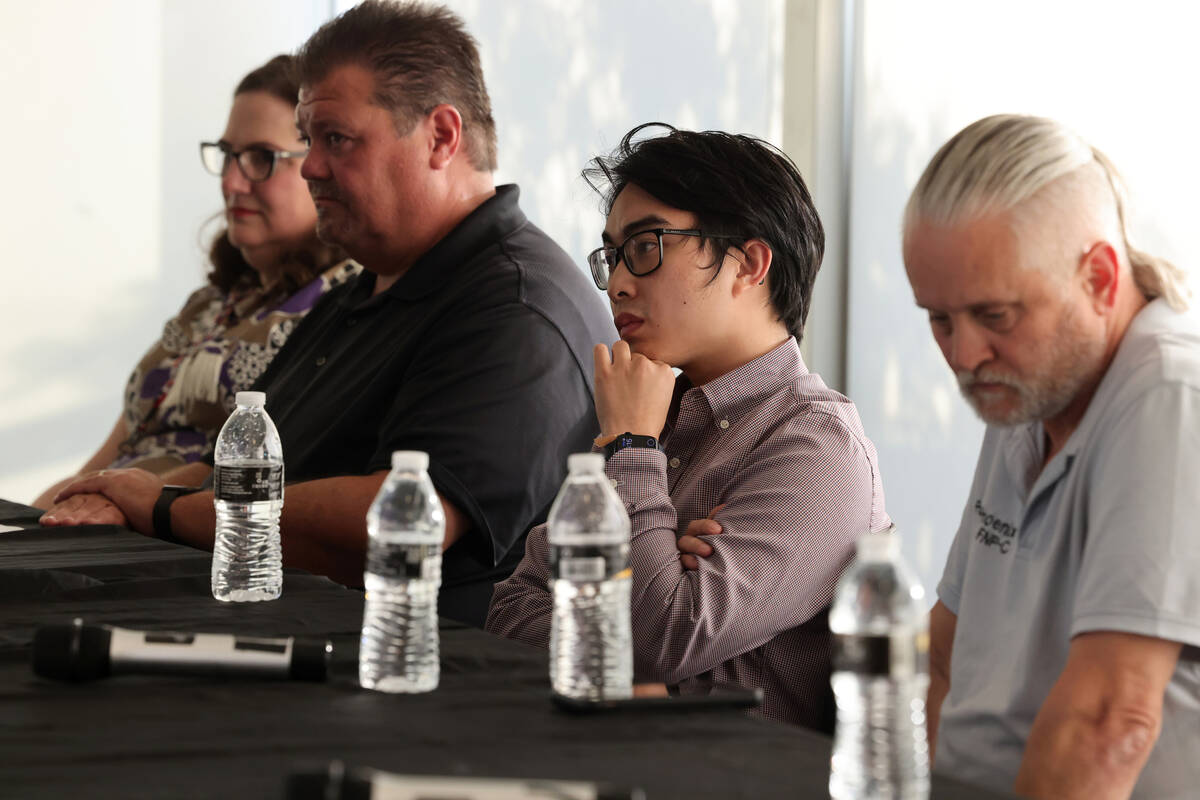 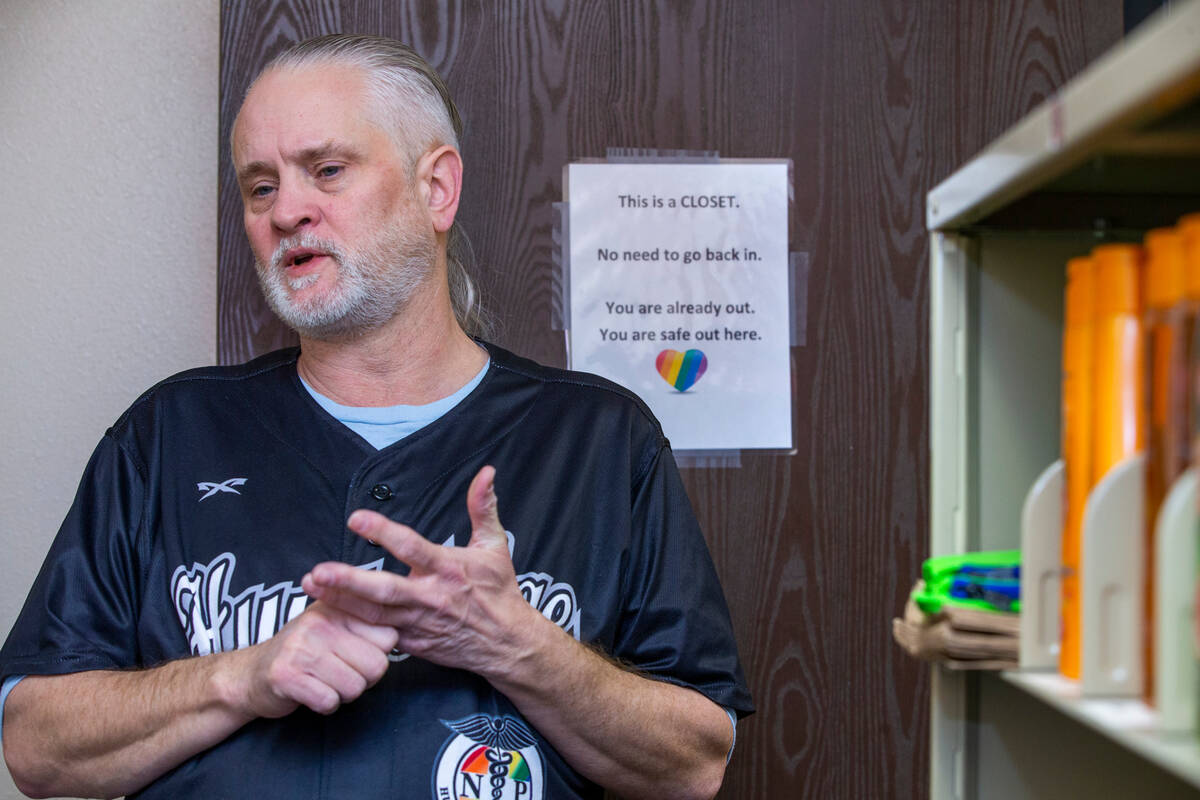 Ariel Ganja, who works at the Chicken Ranch, a legal brothel in Pahrump, said she plans to get vaccinated for monkeypox as soon as possible.

The brothel’s madam, she said, regularly speaks with workers about monkeypox and has given them printed information about the disease, complete with photos of the characteristic rash. Brothel workers are tested weekly for sexually transmitted diseases.

“We have men come in from all over, and we don’t know what they do in their personal lives at home,” Ganja, 36, said about her desire to get vaccinated. “People can come in and be bisexual, all that kind of stuff.

“So, I just want to be protected.”

As more people get the two-dose vaccine, and as others develop immunity as a result of infection, health authorities hope that outbreaks of the once-rare virus will get under control.

“More people are eager to get this vaccine,” said Mona Lisa Paulo, director of clinic and HIV services at the LGBTQ Center of Southern Nevada. “That’s a shift from what we’ve seen with COVID-19.”

A few of the eager have been turned away by the Southern Nevada Health District for not meeting eligibility criteria, with vaccine reserved for those at highest risk. Those initially eligible included gay and bisexual men and transgender people who’ve had multiple or anonymous sex partners in the past 14 days, as well as the close contacts of people with monkeypox.

Data shows that most cases of monkeypox have been in men who have sex with men. However, anyone can contract the virus, which in addition to close skin-to-skin contact can spread through body fluids as well as shared sheets and towels.

With more vaccine becoming available, the health district expanded eligibility on Wednesday to individuals in high-risk groups who also have HIV or who have had a sexually transmitted disease in the last 12 months.

In addition, the health district, which serves the region, expanded eligibility to sex workers of any gender or sexual orientation.

A new client at the Huntridge Family Clinic in Las Vegas suspected he had monkeypox when he noticed a single small bump on the top of his left foot. Within hours, more blister-like bumps appeared on his hands and thighs, and testing confirmed his suspicion.

As a gay man dating a couple different people, he knew he was at some risk for monkeypox, which has primarily been spreading within the social networks of men who have sex with men. Healthy and fit, he thought he’d get only a mild case if he contracted the virus, which typically is transmitted through intimate skin-to-skin contact, oftentimes through sex.

He did not expect the pain. “At times, my entire body has felt like it was on fire from this,” said the man in his mid-30s, who spoke Wednesday with the Review-Journal on the condition that his name not be used to protect his privacy. “Last night, like, I was in so much pain that I did not sleep.”

The man, who recently moved to Las Vegas, said he’d tried unsuccessfully for weeks to get the Jynneos monkeypox vaccine, which remains in limited supply and is not widely available. By the time he found the Huntridge clinic, which offers the vaccination, it was too late.

LGBTQ advocate Matt Dang said he has both both gay and straight friends who want to get vaccinated in part because they’re concerned about the scarring that may result from the disease’s characteristic lesions.

Dang said he has referred people seeking vaccination to both the LGBTQ Center and the Huntridge Family Clinic, where there are fewer restrictions on eligibility.

“We are still getting plenty of requests for vaccines,” said Rob Phoenix, a nurse practitioner at the Huntridge clinic. “We’re vaccinating anybody who wants to get a vaccine, prioritizing the men-who-have-sex-with-men community and people living with HIV.”

The clinic also is counseling clients on ways to protect themselves against the virus. But Phoenix said he’s not convinced that there’s been much reduction in risky behaviors, even though it’s not yet clear how well vaccination alone will protect against monkeypox.

Studies in humans are ongoing to determine the efficacy of the Jynneos vaccine in the monkeypox outbreaks. The vaccine, developed to prevent smallpox, has undergone laboratory and animal studies for prevention of monkeypox.

“In terms of how efficacious this vaccine could be, I think we still have to wait for the real world clinical trial data,” said Cassius Lockett, director of disease surveillance and control for the Southern Nevada Health District.

Dang said his sense is that the general mood surrounding monkeypox is improving.

“The awareness is there, the opportunities (for vaccination) are there,” he said. “I’m hearing people are getting vaccinated, and I’m feeling more secure.”

There have been 211 confirmed or probable cases of monkeypox identified through testing in Clark County since the first local case in June. In the United States, there have been about 23,000 cases identified since May. The first U.S. fatality was reported this past week in Los Angeles. Although monkeypox is rarely fatal, the lesions can be extremely painful and result in scarring.

The Huntridge client says that after being prescribed tecovirmat, also known as TPOXX, he hasn’t gotten any new lesions and the existing ones are improving. TPOXX, approved for treating smallpox, can be prescribed as an investigational drug for monkeypox, meaning that it remains under study. The client also has gotten topical treatments for the lesions but is still in pain.

“If you’re trying to be safe, maybe try a little harder, because it didn’t work for me, and I’m not really putting myself out there a whole bunch,” said the man, who works remotely in employee training.

There are some signs that the outbreaks may be getting under control. There have been recent declines in case growth in Clark County, along with the U.S. and abroad.

However, wastewater surveillance on Monday and Tuesday identified the monkeypox virus in samples at most of the wastewater treatment plants in Southern Nevada, signaling a possible upcoming increase in cases. Before this week, the most recent detection was two to three weeks ago, and it was limited to sewer lines serving a portion of the Strip.

“We will want to see if this is a trend that continues next week, and if so, then we would expect case counts to increase significantly,” said Edwin Oh, a researcher and assistant professor with the Kirk Kerkorian School of Medicine at UNLV.

Wastewater surveillance can serve as an early warning system for disease trends. People infected with monkeypox excrete virus DNA through skin lesions, saliva, feces and urine, which enters wastewater via shower drains, sinks and toilets. Its presence poses no threat to the drinking water supply, which is treated to kill viruses.

Lockett continues to emphasize that Southern Nevadans should remain vigilant. Last month, he said, “My fear is if we don’t get this under control, through a combination of vaccination and the whole behavioral change that needs to take place in the community, we run the risk of monkeypox in the United States becoming endemic and spilling over into the general population.”