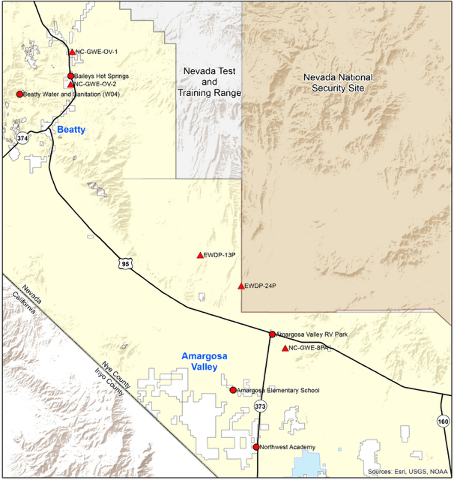 The ten wells sampled by Nye County officials under the Nye County Tritium Sampling and Monitoring Program in December showed “undetectable” levels of tritium, according to the recent lab results.

Nye County officials collected water samples from 10 wells in Amargosa Valley and Beatty to determine if radionuclides from underground nuclear testing are present in wells that are downgradient of the Nevada National Security Site.

In August 2015, Nye County received a five-year $1.27 million grant from the Department of Energy (DOE) for a Tritium Groundwater Monitoring Program that covered the cost of the procedure. The grant will be disbursed in increments of $252,000 on a yearly basis.

Yearly sampling for the remainder of the grant from 2016 through 2019 will be from the 10 core wells and additional 10 wells, officials said.

Five of the wells that were tested last year are owned by Nye County and were installed by the Nye County Nuclear Waste Repository Project Office as either Early Warning Drilling Program wells south of Yucca Mountain, or as part of the more extensive Groundwater Evaluation Program.

The five remaining community wells operate domestic and municipal wells and were sampled from the dedicated pump discharge.

“These 10 additional wells may change year-to-year depending on priorities and recommendations made by the CEM’s,” Klenke said.

Klenke said the area to the northeast of Beatty is of particular interest to tritium monitoring after tritium was detected in one of the wells west of Pahute Mesa, where 85 nuclear tests were conducted between 1965 and 1992.

The well is located on the Nevada Test and Training Range , 2,350 feet west of the NNSS boundary, and approximately 23 miles northwest of Beatty.

The Department of Energy recently said that based on its monitoring observations, it will be more than 250 years before “measurable” tritium will arrive to the well.