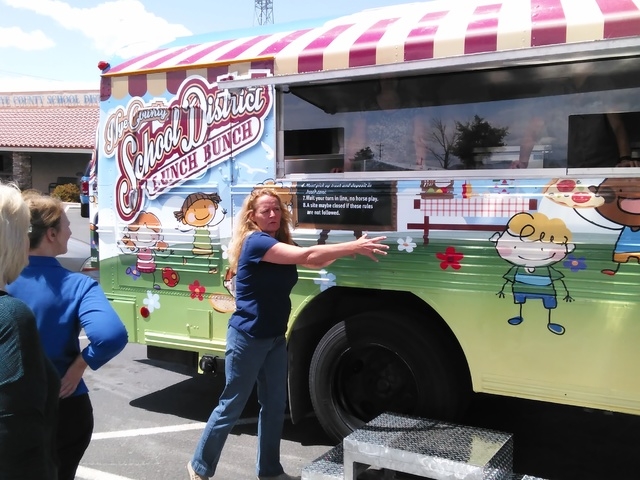 The Nye County School District has a new vehicle to serve in its Summer Food Service Program’s fleet.

The colorfully painted former school bus was recently converted to a literal ‘meals on wheels’ distribution vehicle for the program.

District officials got a firsthand look at the ‘Lunch Bunch Bus’ on Friday outside the school district office.

“We converted it to a summer food program unit and this year, we are going to do it with our bus that you certainly can’t miss,” he said. “It is fully equipped for serving and meets all of the health requirements. I have to give thanks to our food service coordinator, Jodi Martinez, who put it all together and rolling it out. It’s going to be great.”

Martinez said the district created a pilot program using the mail delivery vehicles for the summer food program for the past two years.

The meals are prepared at Pahrump Valley High School and transported via the bus to stops in all areas of town.

The bus is equipped with refrigerated and heated cabinets, as well as a hand-washing sink.

The meals are boxed for the students’ convenience.

“We found a lot of success with it and I wanted to come up with something that was on a larger scale because we keep doing more and more meals each year,” she lamented. “I met with transportation supervisor Cameron McRae and talked about doing a bus, and today here we are. It is now up and running.”

Additionally, Martinez made sure to point out the fiscal impact associated with the new vehicles.

She noted that the U.S. Department of Agriculture provides the district with meal reimbursements for each child during the summer food program.

Plans are also in the works for expanding the program to other southern Nye County areas.

“For the last six years since I’ve been the supervisor, we have been saving up and saving up while trying to get under budget so we can have a little extra in the till and we managed to get enough to pay for the bus,” she said. “In the future, the more meals we serve, the more reimbursements we will get from the USDA and we will be able to hopefully expand this.”

All students 18 years and under will not be turned away.

“We go to the Courtyard Apartments on Dandelion Street, Comstock Park, Petrack Park, and Simkins Park on the north end of town,” she said. “We keep track of how many meals they serve. This is open to any child up to 18 years of age unless they are disabled. If they come to us in a wheelchair, then it’s whatever age. But 18 and under is the general age range.”

Norton meanwhile, mentioned an additional plus for the program, which involves the Pahrump Valley Youth Activities program, which returns again at the end of this month.

“That program provides meals which also count toward this program,” he said. “When we do that program, we are serving those kids who also count and we get reimbursed for that as well. Whatever we make off of that, we can expand the summer food program.”

During the summertime, Norton said the summer food program provides students with the only meals they will eat each week, when out of school, due to their parent or guardian’s financial situation.