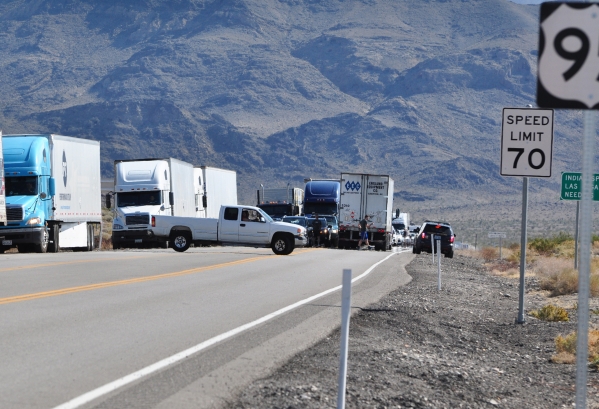 WASHINGTON — Nevada will receive millions in new transportation dollars and a significant interstate designation was given to a future route linking Las Vegas and Reno through Nye County under a five-year, $305 billion measure signed into law Friday by President Barack Obama.

In addition to the additional funding, an official with the Nevada Department of Transportation singled out the law’s new emphasis and funding on freight, which has been promoted by sponsors in Congress.

“NDOT is very happy about that,” said Sondra Rosenberg, the agency’s assistant director of Planning. “We are in the process of developing a statewide freight plan which is identifying strategic priorities for the freight system to support the economic development, safety, and mobility goals of the state.”

Rosenberg said her department is still working through the 1,300-page law but added that so far it appears that most of the current programs remained intact with minor funding increases.

“Nevada will see an increase in formula funding of approximately $170 million over the 5 years,” she said.

As the measure moved through both houses of Congress in recent days, Nevada’s six-member congressional delegation voted 5-1 in favor.

Democrat Harry Reid and Republican Dean Heller supported it when the Senate approved it 83 to 16. In the House, which earlier had voted 359 to 65 for the measure, Republicans Cresent Hardy and Joe Heck and Democrat Dina Titus backed its passage.

Republican Mark Amodei opposed the bill, pointing to what he described as irresponsible funding provisions.

“To call these pay-fors gimmicky is being kind,” Amodei said.

“At best they only exist on paper. At worst, they are a misappropriation of funds intended for purposes other than our highways.”

He also criticized as an “unwise bet” provisions on selling oil from the nation’s Strategic Petroleum Reserve “at a loss” and “assuming the use of private debt collection agencies will aid the IRS in collecting back taxes.”

Others in the delegation stressed the funding certainty a five-year authorization bill provides Nevada.

With chances of increasing the fuel tax all but nil — it has remained at 18.4 cents per gallon since the 1993 — sponsors of the legislation had to turn to other sources to help the Highway Trust Fund pay for popular programs such as highway, rail and transit.

“In the past 10 years, we have had more than 35 short-term transportation spending fixes,” said Hardy, who is vice chairman of the House Transportation and Infrastructure Committee’s Highways and Transit Subcommittee and was a member of the House-Senate conference committee that hammered out the final version of the bill.

“When government fails to provide a long-term road map to success, it is our local communities that pay the price. Nevadans can now look forward to smoother roads in more ways than one.”

Both Heller and Reid focused on the provisions that advance the priority designation of Interstate 11 from Phoenix to Las Vegas and north along the U.S. Highway 95 corridor to Interstate 80.

Although still in the preliminary stages, the proposed road will meet interstate standards, according to state transportation officials. At a minimum, that means it will have at least two lanes in each direction and a divider made up of space or a railing.

The bill signed into law Friday is an authorization measure and does provide specific funding for the future route.