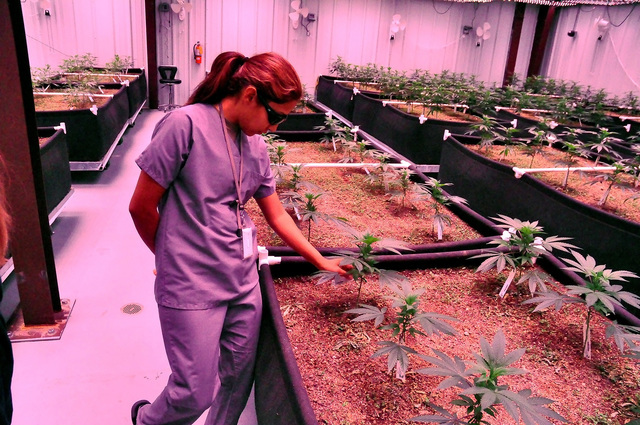 The four medical marijuana businesses that opened in Pahrump within last year have had a positive impact on Nye County’s economy, officials said.

Nye County Planning Department Director Darrell Lacy said the businesses created jobs and increased property taxes on the facilities where they are located.

Annual license fees were $120,000 for the first year. Half of that amount moves forward for renewal each year.

Additionally, there is a two-percent license fee on sales, however with only a few establishments operating, the county collects $4,000 to $5,000 per month.

According to the Nye County Planning Department, four businesses are currently approved to work in Nye County. Among them are cultivation facilities Green Life Productions, CW Nevada, ACC Enterprise, and the dispensary The Grove Wellness Center.

Currently, 12 medical marijuana businesses are in various stages of getting necessary permits and approvals in Nye County.

The fee structure in Nye County is less and property is much cheaper than in neighboring Clark County, Lacy said.

Nye County, however, is stricter in its security. It has more restrictions than the state of Nevada or Clark County.

“Our security regs are tighter but I think we are an easier place to do business,” Lacy said.

Philip Restifo, of Green Cross of America, Inc., whose medical marijuana cultivation facility is slated to open in early November, said he spent $1.4 million on getting all of the necessary permits, building the infrastructure and remodeling the existing building that used to house a bottling plant.

“We are waiting for recreational go into effect,” Restifo said. “Once they approve recreationally, we will have no problem in recovering our money, plus making a profit.”

The hardest part of the process was getting permits and inspections for all of the improvements required at the facility, Restifo said.

“Nye County is working hand-in-hand with us so we can get this facility to open by mid-November,” he said.

Medical marijuana businesses in Nye County get their license based on approved plans, Lacy said. The plans include standard building permits, inspections, security plan and final review by the Nye County Sheriff’s Office and planning for completion of all medical marijuana establishment conditions.

“The security is the big one, which included access control, security cameras, delivery vehicle, etc. This also includes a live video feed to the NCSO – they have real-time access to the cameras at the MME facilities,” Lacy said.

The county’s approval is followed by an inspection by the Nevada Department of Health and Human Services.

“It is usually three or four weeks after we give final approval before the state is satisfied,” Lacy said. “Then they can start growing, and about four to five months later the cultivation facility has mature plants for harvest with material for testing and if approved they can sell.”

Received all necessary approvals, but not open